Chrysler Town & Country Cancelled – Will The Grand Caravan Pick Up The Slack?

Chrysler boss Sergio Marchionne has decided that Chrysler and Dodge don’t need two nearly identical minivans competing with one another. The minivan that will cease to exist in 2014 will be the slightly higher-end Chrysler Town & Country, the second-best-selling minivan in the United States this year and the second-best-selling minivan in Canada in April.

On the surface, this sounds like the equivalent of Nissan deciding to cancel the Altima, America’s second-ranked midsize car or Mercedes-Benz determining that the C-Class, America’s second-best-selling premium car, is failing.

But remember, the Chrysler Town & Country is a Dodge Grand Caravan. The grille is different. Some interior textures have been altered. But this is very much a Chevrolet Silverado/GMC Sierra situation here; so much more than even a Hyundai Sonata/Kia Optima cooperative. The Altima and C-Class, on the other hand, are twinless.

This minivan cancellation isn’t a Chrysler first. The Plymouth Voyager ran its course as a minivan between 1984 and 2000, at which point the Plymouth brand disappeared. One can assume the Lancia Voyager that Chrysler’s Fiat bosses created for European consumption won’t last long, either. This Town & Country cancellation is a whole ‘nuther matter. The Chrysler Group’s headline brand will no longer sell a minivan. 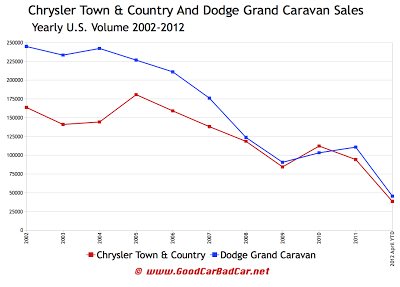 Not that it matters from a showroom perspective. Canadians have long been acquainted with the notion of joint Chrysler-Dodge-Jeep dealers (which now often include Fiat), and Americans are now accustomed to seeing Chrysler-Dodge-Jeep-Ram-Fiat stores. So if a customer can walk into the very same showroom, trade in their old Town & Country, and buy a new Dodge Grand Caravan, is there any reason to believe that the Italian-run bosses in Auburn Hills will be disappointed by their 2014 minivan volume?

For the record, 2011 ended with the Chrysler and Dodge owning 61.4% of the Canadian minivan market, the Dodge outselling the Chrysler 12-to-1. In 2010, the two combined for 62.9% market share in the segment, the Dodge alone grabbed 58.5% of all minivan sales. The Grand Caravan was the fourth-best-selling vehicle in Canada in 2011 but, had each and every Town & Country buyer been directed to the Grand Caravan, it would have ranked third, ahead of the Honda Civic. 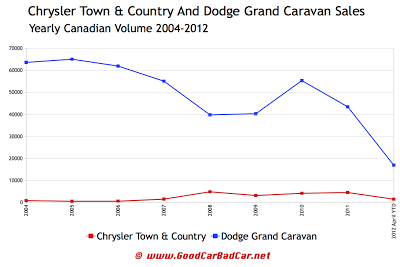 That’s what Chrysler can accomplish when the Town & Country is a bit player. Move south of the border, however, and the Grand Caravan’s 2011 finish slotted it in at the 32nd position, as the second-best-selling minivan, behind the Toyota Sienna. But unlike the Canadian strategy, Chrysler USA emphasizes the Town & Country and it therefore sells in large numbers, as well. Together, the Chrysler/Dodge pair would have ranked 14th.

In market share terms, the Grand Caravan and Town & Country ended 2011 with 41.8% of the minivan segment, the Dodge a little more than three percentage points ahead of the Chrysler. That’s down from 2010 when the Town & Country was America’s best-selling minivan and the two combined for 45.3% of the market and the Chrysler was two percentage points ahead of the Dodge.

Even if Dodge doesn’t manage to conquer each and every potential Town & Country customer once the Town & Country departs, there will be some manufacturing and marketing savings provided by its cancellation. Volume is not the only key to profitability.

What about the minivan segment as a whole? Are minivans really a dying breed? General Motors ignores the category in the U.S. and only offers Canada a quasi-minivan, the Orlando. Ford’s Transit Connect is not the successor to the family’s old Aerostar. Will Volkswagen build the small Bulli, and will the Chrysler-based Routan be cancelled along with the Town & Country when the new models come out in 2014? There’s no Mercury Villager. The Mazda 5 is small and fading. The Kia Rondo is no longer built for U.S. consumption. The Kia Sedona is going on what we believe will be nothing more than temporary leave. Given its seat count and powertrain configurations, the Ford C-Max will be more of a Toyota Prius V rival than a potential Sienna competitor.