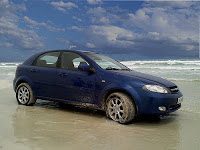 Americans know it as the Suzuki Reno and Firenza, but in Canada, Chevrolet sold the Daewoo-developed car as the Optra and Optra5.

Last year, Bill Jamer – one m short of a great name – bought a 2007 Optra5 from an Ottawa-area Chevrolet dealership as a new car for $21,000. Apart from the fact that few people were paying that sort of money for a new Optra last year (unless Bill’s including all his fees and taxes), Bill was swindled in a major way by the Chevrolet dealer.
Of course, General Motors wants nothing to do with it. Dealers are distinct operations with no ties but for the logo on the sign. See, Bill Jamer thought he bought a new car. He was led to believe he was buying a new car. After the paint began to blister on the hood of his Chevrolet Optra5, however, Bill took the car to a Nova Scotia dealership where they discovered the hood and front bumper had been repaired at some point. 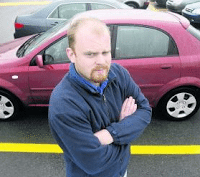 Since Bill Jamer knew nothing of any repairs, it became quite obvious quite quickly that Jim Tubman Motors in Ottawa had reason to repair the Optra5 before Bill Jamer bought it. Strange that, by law, Bill is bound to disclose the “accident” related to his car when he attempts to sell it, but Jim Tubman Motors never felt necessary to disclose the information to Bill Jamer.
Apparently, between the GM plant and the dealership in Ottawa, Ontario, the car had come off the trailer hard. After much wrangling, Bill Jamer was offered $1,200 to pay for the cost of repairing paint blisters. He’ll be taking Jim Tubman Motors to court, however. His car wasn’t worth $21,000 when new, although it was impossible for him to know that, and the cost of dealing with the problem; the repairs, and that lost value all need to be reimbursed, in his mind.
Jamer says GM told him, “We only build the cars. We don’t sell them to the public.” Meanwhile the dealership said, “It was damaged by the company in shipment, before we took ownership of it. We just put the new fenders on and stuff, so it’s not our problem.”
External links:
Chronicle-Herald
Jim Tubman Motors (email: [email protected], phone: (613) 733-4050
GM Canada Contact
(Jamer photo from the Chronicle-Herald)