COMPARING SALES OF ENTRY-LUXURY CARS IN THE USA (NOVEMBER 2009)

BMW’s 3-Series is the Stephen Harper of luxury cars. Canada’s Prime Minister, an excellent political strategist though not a charismatic figure, has great fun smothering the voices of opposition. His underlings help control the questions he is asked by the media. And his ability to dismantle a complaint put forward by an opposing Member of Parliament in Question Period is something to behold. Yes, Stephen Harper and the BMW 3-Series aren’t fans of the competition.

However, like Stephen Harper, the BMW 3-Series crushes internal mutterings as well. Canada’s PM avidly seeks out and consumes any part member tempted to travel off message; and he’ll have your caucus entry card stripped just for voting against him once. Likewise, toppling the 3-Series from its King of BMW perch would require at least three other BMW models. In other words, combined sales of BMW USA’s next two best-selling cars (the 5-Series and X5) don’t even measure up to the worthiness of BMW’s second-smallest car.
Here’s a Graph to illustrate the 3-Series’ domination in its own segment. Click here for the October edition of this Sales Stats post. 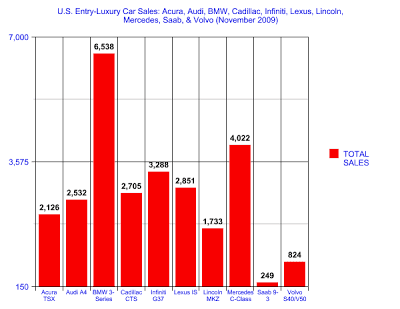