COMPARING SALES OF ENTRY-LUXURY MODELS IN THE USA (AUGUST 2009)

Entry-luxury is not only something of a misnomer; it’s also impossible to define when it comes to automobiles. Sure, the BMW 3-Series starts out as entry-luxury, but the $40,300 pricetag of the 335i sedan is just a way of entering the $40K bracket.

For the purposes of the Graph you’ll inspect in a moment, The Good Car Guy collected August’s Sales Stats on smallerish vehicles from ten different providers of luxury goods. That means Lincoln’s MKZ, the Cadillac CTS, Saab 9-3, Volvo S40 & V50, Lexus IS, Infiniti G37, Audi A4, Acura TSX, Mercedes-Benz C-Class, and BMW’s 3-Series. Why are vehicles like the Volvo C30, Acura TL, Audi A3, and BMW 1-Series left out? For one thing, I hate clutter. More importantly, this is supposed to be a showcase of competitors. That being said, sales totals from each model incorporate all body configurations.
Anybody looking to spend their hard-earned money on a small-to-midsize luxury car considers one of these automobiles. The vast majority end up avoiding most of them, test driving a few, and selecting something German. Quite seriously, this is an international battle for your hearts and minds. It more than likely began before you realized: when your father’s rich cousin came to the family reunion in an ’88 BMW 325i or when you saw those wide-fendered Audi A4 DTM racers on the Speed channel. One way or another, you prefer one above the other. This Graph just happens to show which cars America favoured best in August. 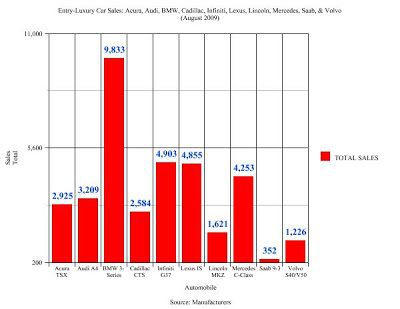