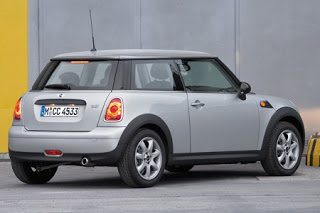 ACROSS THE POND – THE MINI ONE

View this as a distinctly likely possibility, Across The Pond articles each Friday, aimed at helping you understand the automotive marketplace from a worldwide perspective.

Today, our subject is from the Mini showroom. Thought you knew all of BMW’s British small cars? That’s understandable; with the Cooper, Cooper S, naturally-aspirated and turbocharged convertibles, similarly-engined Clubmans, and John Cooper Works versions of these cars smattered throughout. Yet, even with a wide-ranging model lineup, we North Americans are left out of the loop…. considerably.
Considering this fact, Mini’s humongous model range in the United Kingdom didn’t appear to help total sales in 2008. With a couple extra models, Mini UK sales were down 15% to 40,736. Meanwhile, in the United States, Mini was one of just two automakers to post improved total sales in 2008. This BMW subsidiary’s numbers were up 28.6% to 54,077. In the USA, Mini sold an extra 39 cars per day in 2008.
Mini’s Cooper D has garnered some press aforetime. D is for diesel, as you assumed, and diesel makes up somewhere around half of all new car sales in Europe, depending on the country and its tax formula. However, at the lowly price point of £12,245 (ignore that number’s exchange value of $18,756 USD, the Cooper’s price translates to $20,836 USD while it’s actually an $18,550 car) Mini offers 95 horsepower and a fuel economy average around 44 U.S. miles per gallon. That’s close to 5 litres/100km for combined city/highway driving.

In such a small car, 95 horsepower still allows the One to touch 115mph. The 0-60 sprint takes slightly less than 11 seconds with a manual transmission. With an unladen weight of 2,502 pounds, the One has natural agility. On the other hand, even as the Mini Cooper D is forced to carry an extra 66 pounds – most of it over the front end – the diesel can touch 66 U.S. miles per gallon on the highway. Yowzah.
Cooper Ds will also sprint to 60mph about a second quicker, provide passing power that the One has no hope of offering, and pull up to 121mph.
Here, then, is the Mini One’s proverbial sleeve-held trick. In the UK, the Mini One’s insurance group is 3 rungs lower than a Cooper or Cooper D at a 5e rather than an 8e. Saving £1,370 over the Cooper, which itself saves £1,071 over the Cooper D, the Mini One is a financially cool decision. Get the car you want, but don’t pay for it. Sure, Mini One owners don’t enjoy high horsepower ratings from the Cooper S, but they don’t pay for them either.
Besides, one thing Mini One owners can point out to one who mocks them for their lack of firepower is the One’s ability to take any one road and enjoy it at one speed or another. High-horsepower cars demand speed and fail to produce joy at lower speeds. Since the Mini One only operates at low speed, relatively speaking, daily driving becomes fun rather than tedious.
More Across The Pond articles?
Citroen Berlingo Multispace
Top 5 Ineligible Cars For The Good 12 v2.0
Ssangyong Rexton R-Line
Subaru Impreza WRX STi 20th Anniversary Edition
Skoda Octavia