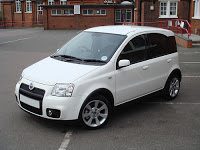 ACROSS THE POND – Fiat Panda 100HP

Although pandas are more commonly linked with Australia, the automotive world is indelibly linking the word ‘panda’ with Italy. Fiat, now firmly back from the brink of disaster, has returned to its small car roots. GoodCarBadCar has given the wee Panda some attention before, but because such a large portion of GCBC readers will never see the world’s best performance-car bargains, it is expedient that GoodCarBadCar finds them in action for you. There’s more to come, but first check out the Fiat Panda 100HP.

Read about other Panda appearances at GCBC Top 5

Not long ago, American car consumers were frightened by vehicles which had bhp ratings below 100. In 2007, that same syndrome almost rings true of cars with horsepower under 190 or 200. Forget that, would’ya? Here are two reasons that thinking is misguided: the Panda is very lightweight; extra power necessitates more weight. Weight and power equals increased fuel consumption. Bad. Reason numero dos: the Panda is really, really cheap. We’re talking £6000 below Mini Cooper, equivalent to Honda Fit kind of prices. Don’t complain – just watch the clip.