ACROSS THE POND – Chevrolet Captiva

Had you imagined the day when The Good Car Guy would take you Across The Pond to see a Chevrolet? If you were in the U.K., £16,995 would buy you a Chevrolet SUV that – shock of all shocks – is not available to Americans.

And you thought the only sport-utes not available to Americans were built by Citroen and Peugeot. No, even the great Chevrolet, with its history and heritage, withholds the Captiva from your eyes. With good reason, they’d likely add.

We North Americans can buy the Equinox, TrailBlazer, Tahoe, and Suburban. Add the Traverse to that mix ‘fore long. And Saturn would supply you a Vue if you so desired.

Speaking of which; the Vue has a strong connection to the Captiva. The very vehicle GoodCarBadCar just reviewed (that’d be the Vue, follow?) is similar to the vehicle Britons see as the Vauxhall Antara. The Captiva is very much an enlarged Antara – which makes it an enlarged Vue.

The engine range for Captiva’s starts with a 2.4L gasoline-fired engine. It won’t exactly send chills down your spine and it won’t send power to any more than two front wheels. Once you choose the 7-seat option, you’ve opened yourself up to the world of diesel. The 2.0L oil-burner is much torquier, similarly quick (or rather, slow) and far more efficient. The diesel supplies you with 74 extra pound-feet while also adding 14 horsepower.

Top-of-the-line Captiva’s stick with the 2.0L diesel but add full leather, big wheels and stereo, and auto climate control. Like the other diesel models, this LTX sends drive to all four wheels. But you’ve paid dearly for the privilege of owning this version of the Captiva. Adding an auto transmission to this already packed cute-ute sends the price to £24,825.

For context, Citroen’s C-crosser has a more powerful 2.2L diesel, seats seven passengers, and can be had for £22,725 or can be had for £600 more than the Captiva in heavily-equipped guise. The C-crosser is basically a Mitsubishi Outlander in French clothing.

Need more context? Honda’s 2.2L diesel fits in the CR-V. Honda UK prices the 2.2L diesel a notch above the 2.0L gas engine, but it still tucks in underneath the Captiva in the price scheme. Diesel CR-V’s top out at £24,717, but do only seat five passengers.

Should you be sending angry letters to Detroit, demanding V6-engined Captiva’s be sold in Chevy dealerships here? Well, probably not. It’s interesting to know that the Captiva slides under the Vauxhall Antara in pricing; comfortably. And it’s also enlightening to consider Chevrolet’s growing worldwide acceptance. Do recall, General Motors now sells a higher percentage of its cars in the rest of the world than it does in its own backyard. 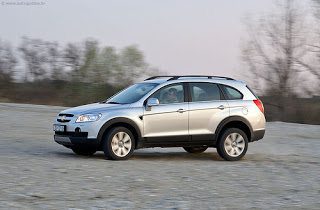