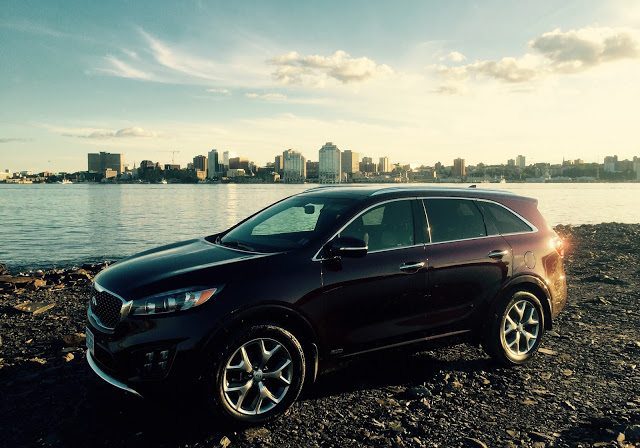 Outside of buyer’s guides and the manufacturer’s website, Kia Canada’s true flagship isn’t the K900, which is rare beyond belief. Similarly, the Cadenza has attracted fewer than 500 Canadian buyers in 28 months on the market, hardly enough for most people to know it even exists.

That may well make the Sorento, all new for the 2016 model year, Kia’s prevailing flagship. Assembled in West Point, Georgia, the Sorento is currently the top-selling Kia in Canada. The release of this third-generation Sorento sets the stage for a revival of the company’s fortunes after consecutive years of decline following 2012’s record-setting performance.

We drove a 2016 Kia Sorento SX around Halifax, Nova Scotia, for a week in early August. Not only did we discover that the new Sorento skipped a generation-and-a-half ahead of the old model, we quickly realized that it stacks up very well when compared with direct competitors. As for its standing in the Kia lineup, nothing Kia builds is better than the new Sorento.

WHAT IS IT?
Here’s what the Sorento is not: it’s not an identical twin of its corporate platform partner, the Hyundai Santa Fe Sport. For one thing, the Sorento doesn’t look like the Hyundai. But whilst Kia offers the slightly smaller Santa Fe Sport’s available 2.0L turbocharged four-cylinder as an optional upgrade – as in this test car – the Sorento also offers the larger Santa Fe XL’s standard V6 as a top-level engine. From control layouts to interior style to suspension tuning, it’s abundantly clear this isn’t a case of badge engineering. 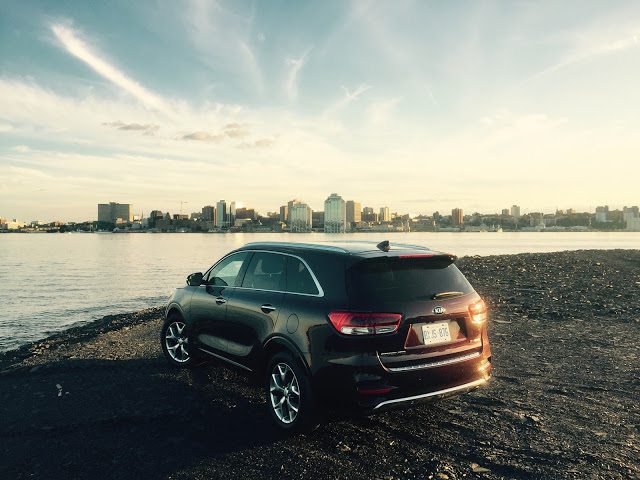 The 2016 Sorento is its own vehicle, of that there can be no doubt. And this is not a new mission for Kia’s larger utility vehicle: the Sorento was a traditional body-on-frame SUV from its introduction in 2002 to its demise in 2010 when Hyundai offered no such like-minded vehicle.

The second-generation Sorento proved to be a hit. In the United States, after averaging 40,000 annual Sorento sales between 2003 and 2009, Kia sold an average of 113,000 Sorentos per year over the last five years. Now, the latest edition of Kia’s bigger utility vehicle creates greater space between the Sorento and its smaller sibling, the Sportage.

HOW BIG IS IT?
This is where the Sorento gets interesting. Compared with North America’s best-selling utility vehicle, the Honda CR-V, the 2016 Sorento is precisely eight inches longer, bumper to bumper.  But that’s not enough to make the new Sorento a full-fledged midsize crossover. The CR-V’s big brother, Honda’s Pilot, is also newly launched for the 2016 model year, and it’s seven inches longer than the Sorento.

The Sorento and like-sized vehicles, from the Hyundai Santa Fe Sport to the Ford Edge to the Nissan Murano and even Jeep’s Grand Cherokee, perform well in the marketplace precisely because they’re neither too small nor too large.

DOES IT WORK?
The list of items Kia got right with this thorough 2016 Sorento revamp includes exterior styling, interior materials and design, seat comfort, cabin quietness, feature content, powertrain flexibility, and most especially, ride quality. That’s a lengthy list, and it takes into account a number of more specific factors, from the ease of use with Kia’s UVO infotainment touchscreen to the additional space afforded to both humans and their stuff compared with the previous Sorento, to the way the vehicle not only masks bumps and maintains its composure over yumps but also the way occupants hardly even hear the suspension completing its assigned tasks. In terms of the way the Sorento makes its way down the road, it’s downright Lexus-like.

The Sorento is not, however, sporty. Gone is the weighty steering, here to stay is a lighter helm with no feedback to speak of whatsoever. In a vehicle of this type, a focus on ride quality over outright handling ability is most assuredly the appropriate route for suspension tuners to take – ride quality and handling are two ends of a teeter-totter – but the Sorento perhaps veers too far to the comfort end of the spectrum for a driver who may be keen on something like the Mazda CX-9 or upsizing from a Ford Escape. The 6-speed automatic is also engineered to slur shifts rather than snap swiftly into gear. Again, that’s not inappropriate for this kind of vehicle.

As for the turbocharged 2.0L four-cylinder, an increasingly common engine configuration for vehicles of every kind, there’s a lack of response from low rpm that you won’t encounter in, for example, Volkswagen’s 2.0T. In addition, this 2.0T isn’t quite as refined at high rpm as the VW powerplant nor are there any pleasant growly noises.

The mid-range is as punchy as the Sorento’s available 3.3L V6, however, and that’s what counts in the real world. Passing power is plentiful as you ride a 260-lb-ft wave across a plateau of torque. Unlike this 2.0L turbo, the 3.3L has the ability to wow with power, and it’ll be almost identically efficient in city driving, albeit more thirsty on the highway to the tune of an extra litre of consumption for every 100 kilometres.

IS ANYONE BUYING IT?
In the United States, the Kia Sorento is America’s 17th-best-selling SUV/crossover, propelled along over the last seven months by a 9% year-over-year improvement to 66,170 sales. That’s on par with the total achieved by the Hyundai Santa Fe Sport and its long-wheelbase sibling, the Santa Fe.

The Sorento has moved upmarket somewhat, however, and in Canada, we’re now seeing the result of comparing sales of the last-generation model from last year with the new slightly upper-class version. The Sorento ranks 12th in Canadian SUV/CUV sales, and year-to-date volume is up 7%. But that 7% increase is largely attributable to big gains early in the year, when Kia was beginning to market and deliver the new Sorento and clearing out the old model. Year-over-year, between May and July, 2015 sales are down 32% compared with 2014.

SHOULD I BUY SOMETHING ELSE INSTEAD?
One assumes that because you’re seriously considering a Kia, you’re aware of and interested in the company’s five-year, 100,000-kilometre comprehensive warranty. Perhaps you don’t like the idea of considering another vehicle without such a warranty. In that case, the Hyundai Santa Fe XL (simply called the Santa Fe in the United States) is a prime alternative. The excellent 3.3L V6 is standard equipment, as is a third row of seating. It’s not a tweener-sized model, but that pays dividends in the larger cabin. 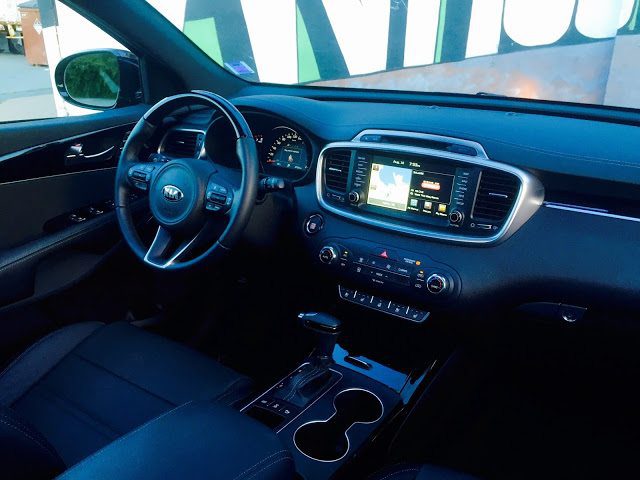 But in this $40K+ range, a two-row 2016 Sorento must fend off challenges from all corners, not just from Hyundai. This is the starting point for many barely-big-enough premium contenders like the Audi Q5 and Acura RDX. The Jeep Grand Cherokee Laredo, with an option group or two, also resides right around the $45K mark.

The 2016 Sorento’s value quotient will always be hard to beat, of course, whether at the SX high end or further down the line.

HOW MUCH SHOULD I PAY?
There comes a point in life where one decides that a third row of seating, even if it’s only used in emergencies, is more useful than a few under-floor storage compartments which Kia inserts in Sorentos without the third row. The Hyundai-Kia 3.3L V6 also makes a terrific case for itself and barely loses out in terms of fuel economy.

Compare those prices with the $43,910 cost of a two-row, 2.0T Sorento SX and establish which one best matches your list of requirements. Either way, the Sorento is easily the best Kia on sale today. The Sorento is a better all-around package than the Optima. It’s better for families than the Sportage. Unlike the Sedona, the Sorento attended finishing school.

Timothy Cain is the founder of GoodCarBadCar.net, which obsesses over the free and frequent publication of U.S. and Canadian auto sales figures. Follow on Twitter @goodcarbadcar and on Facebook. The Sorento was supplied by Kia Canada’s press office.