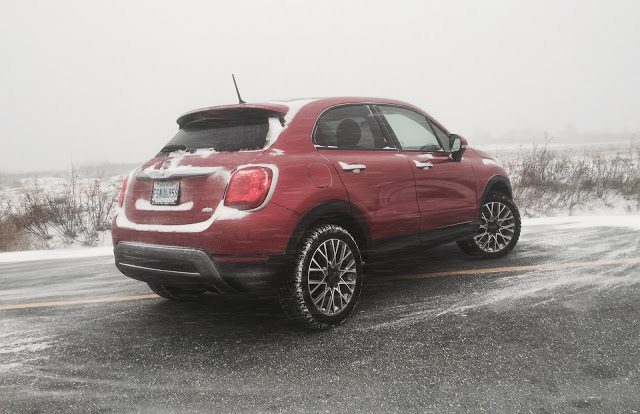 I say, “Fiats are too small, Fiat needs a crossover to meet increasing SUV demand.”

And you’d be right, because behind the Fiat badges and underneath the red paint sits the exact same architecture used for the Jeep Renegade we tested last autumn. Yet the end results are startlingly different, a testament to the end of an era of badge engineering. True, the 500X is Fiat’s Renegade – or the Renegade is Jeep’s 500X – but these two vehicles are at least as different as Melania and Ivana.

WHAT IS IT?
This is what you get when you take the GM Fiat Small Platform, thoroughly update it, and instead of allowing it to exit the Melfi, Italy, factory as a boxy Jeep Renegade, send it on its way as a curvaceous Fiat. 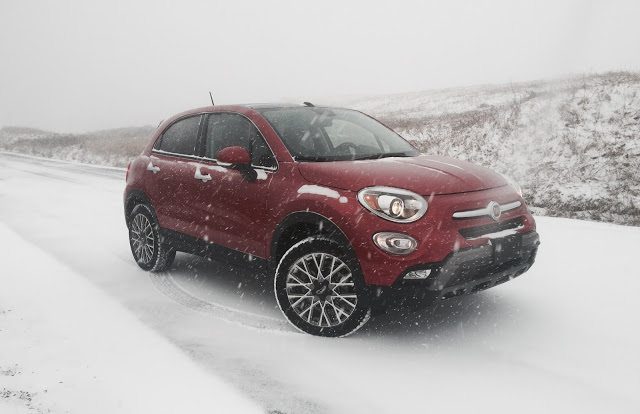 Aside from ride height, the 500X de-emphasizes what many of its competitors emphasize: SUV-like styling. The 500X is pretty, not a characteristic typically associated with SUVs and crossovers.

Like the Mini, the 500X is also intended to compete at a premium price point. Canadian pricing begins at $24,840 for a front-wheel-drive 500X Pop with a 6-speed manual transmission and a 1.4L turbocharged engine.

Total? You might want to sit down for this.

HOW BIG IS IT?
Sized like I’d want all cars to be if only I didn’t have a 70-pound dog who liked to go to Costco with the whole family.

The 500X is wonderfully maneuverable, lithe, and agile largely because it’s only a few inches longer than a Nissan Versa Note.

Compared with the class-leading Honda HR-V we drove the week prior to this 500X test, the Fiat is an inch shorter, bumper to bumper, identically tall, and an inch broader across the middle. The HR-V, however, offers 10% more total cargo volume and 25% more space behind the rear seats. The trade-off? 500X passenger volume is 4% larger, and for the driver, the 500X feels 20% bigger.

In terms of interior space allotment, the 500X is no Magic Seat-equipped Honda HR-V, but it’s no cramped Mazda CX-3, either. In fact, it’s safe to say the 500X is exactly as spacious as you’d expect a car of this size to be, and driver comfort is exceptional.

When it comes to the control layout, the 500X benefits from the inclusion of Fiat Chrysler’s UConnect. But at the same time, the Fiat is let down by a bunch of poor quality bits and pieces, most notably, the doorhandles. As a primary touch point, these need to be less flimsy, and so does the switch which operates the selectable all-wheel-drive modes in the centre console.

(adsbygoogle = window.adsbygoogle || []).push({});
As for performance, there are two sides to the coin. While on the one hand, the 500X Trekking on 18-inch winter rubber rides like a loping French sedan, the 500X’s steering is so light and indirect that there’s little sense of control. Yes, the 500X’s steering can be heavier if the all-wheel-drive system is switched out of Auto or Traction+ and into Sport, but weightier steering can’t be selected independently.

There’s no great sense of roadholding or grip here, but there needn’t be. There does need to be a sense of refinement and structural integrity, and on both counts, the 500X is lacking.

The FCA 9-speed automatic transmission is forever disappointing. The 9-speed’s weak points – slamming into second and third gear like it’s been tossed off a cliff – are highlighted on a cold winter’s morning. Fortunately, there are moments when the 9-speed is unobtrusive. Unfortunately, there are too many moments where it makes its presence known in a negative fashion. With incessant whirring sounds emanating from its nether regions and a unibody missing the solidity of the Countryman or even the Encore, the 500X’s urban competence and driver comfort are nullified.

Fuel economy is also a sore point, both in the real world and in official ratings. Natural Resources Canada’s city rating for the the 180-horsepower, 9-speed, four-cylinder, 3000-pound 500X AWD is no better than the city rating for the 235-horsepower, 6-speed, turbocharged four-cylinder, 4000-pound Lexus NX200t. Huh? And at 10.2 L/100km during our test, the 500X didn’t do as well as our own long-term Honda Odyssey, a 3.5L V6-equipped 8-seater weighing nearly 4500 pounds. 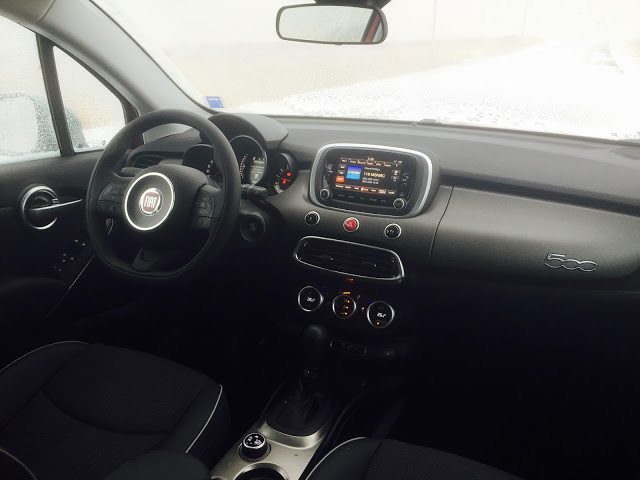 IS ANYONE BUYING IT?
Nope.

In the United States, the 500X is wildly more common than it is in Canada, but that’s not saying much. Only 3% of the subcompact crossovers sold in America in January were Fiat 500Xs.

In Canada, that figure was just 0.7%. Only 634 copies of the 500X have been sold in Canada since May, but a large percentage of those left showrooms in July. Since August, Fiat Canada has averaged only 60 500X sales per month.

SHOULD I BUY SOMETHING ELSE INSTEAD?
Probably. But we’re not going to push you towards another subcompact crossover.

There is something vaguely authentic about the 500X’s Jeep Renegade partner, perhaps because it really can crawl a rock. The Mazda CX-3 is a joy to drive, if only it wasn’t so tiny inside. The Nissan Juke, likewise, is an oddball choice that’s fun to drive, but the cramped interior is a no-go for many buyers.

But at this price point, the 500X is nudging up against roomier, more luxurious, more refined, and more capable utility vehicles such as the Audi Q5 and Acura RDX. The basic BMW X1 costs less than this Fiat.

Options on a Trekking model aren’t the only issues. Take the $7800 worth of options off the table and you’re still left with an undersized, underperforming subcompact, a complaint levied at the 500X’s chief rivals, as well. And at $33,035, you ought to be interested in a 2016 Ford Escape 2.0L EcoBoost AWD or 2016 Mazda CX-5 GS AWD with some options, or a 2016 Kia Sorento LX Turbo AWD. 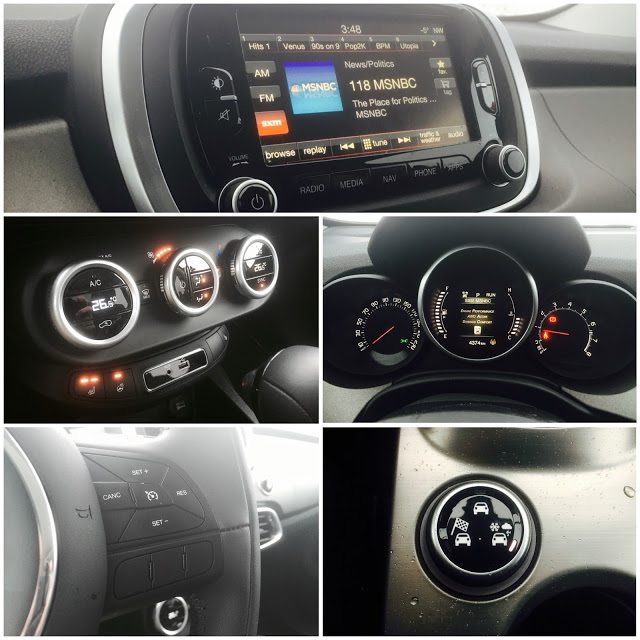 HOW MUCH SHOULD I PAY?
Let’s hope you’re not thinking $41,000 is acceptable for a subcompact crossover from a non-premium brand, regardless of the merits of heated steering wheels. (And oh, how meritorious.)

But if you’re taken by the 500X’s styling and ride quality and Italian charm, consider the front-wheel-drive 2016 Fiat 500X Sport with the superior 1.4L turbocharged engine, a 6-speed manual transmission, and a great set of Bridgestone Blizzak tires. For $35,750, includingh the driver assist group, the luxury-laden convenience group, 18-inch wheels, the dual pane sunroof, and the Beats Audio sound system – not including the price of the AWD-replacing Bridgestone winter tires – the 500X is a strangely enticing package.

WHAT’S THE VERDICT?
The 2016 Fiat 500X is too charming to ignore, but also too flawed to recommend without a long list of reservations.

Fiat is afflicted with reliability woes that have tarnished the brand’s image only a few years after its return to North America. Given the lack of perceived quality in the 500X’s interior and the transmission’s insubordination, this concern was not waylaid by our week with the newest Fiat.

But there will be some who are so attracted by the Fiat 500X’s styling, so captivated by its loping suspension, so accepting of its right-sized cabin, and so affected by its intuitive and fairly luxurious interior that concerns will frankly be the least of their concerns. So far, there are not many such buyers in Canada. But it’s not difficult to see why the 500X buyer whose new Fiat turns out to be reliable will be very happy with their Italian acquisition, even if the transmission crashes into third gear and the doorhandles were originally intended for Dollarama’s discount shelf.

Timothy Cain is the founder of GoodCarBadCar.net, which obsesses over the free and frequent publication of U.S. and Canadian auto sales figures. Follow on Twitter @goodcarbadcar and on Facebook. The 500X was supplied by FCA Canada’s press office.