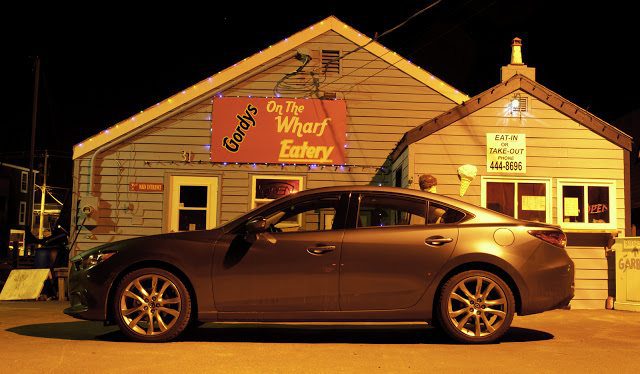 I don’t know who came up with the whole “Look up (insert anything here) in the dictionary and you will see a picture of (insert person here),” but I’ve long since grown tired of the hyperbole.

Look up “pretty” in the dictionary and you won’t actually see a picture of Halle Berry. You will see the definition of pretty, in words.

To the dismay of many Cape Bretoners, when they look up “scenery” in the dictionary, they don’t see a picture of Cabot Trail. Instead, there’s a definition of scenery, using words.

Look up “midsize sedan” in the dictionary, and you won’t see a picture of the Mazda 6. There are two reasons for this. First, we’re not looking at a picture dictionary, as we’ve already discussed. Also, North American car buyers simply don’t identify with the Mazda 6 when they first think to themselves, “Hmm… midsize sedan.” 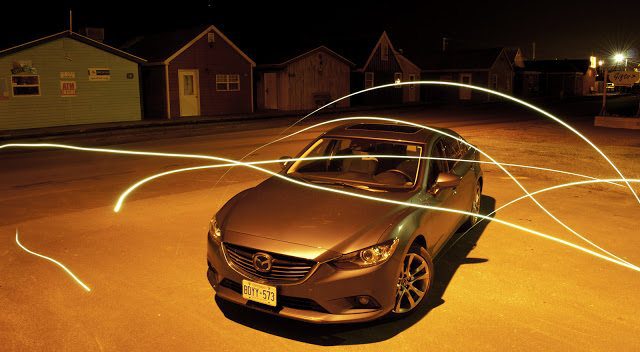 A decade ago, the 6’s failure to conquer the midsize market had as much to do with its busy ride and noisy interior as it did with its slightly cramped rear seat. Three available bodystyles and enchanting dynamics weren’t able to overcome what many buyers obviously saw as severe deficiencies. Half a decade ago, the second-generation Mazda 6, a renamed successor to the 626 which came before, failed in spite of its classy good looks and a significant increase in size. Also, there were spiders.

Contrary to what Mazda’s SkyActiv marketing plan would have you believe, the third-generation Mazda 6 isn’t a revolutionary approach for Mazda. Oh, it’s all new. They’ve changed plenty of part numbers. But the 6 is once again intended to attract buyers who value good looks, relatively minimalistic interiors, and sporty dynamics. This is still the sedan for the buyer who wants a second-hand RX-8 but can’t fit that car into his or her lifestyle.

For the third time, enthusiast publications want to believe things will be different. Surely now the market will accept the midsize Mazda sedan. It’s so fun to drive, they’ll say. It looks so freaking good. There’s abundant space. It looks incredibly good. There’s a lot of stuff inside. And it looks really, really good. It looks better than all its rivals; perhaps even better than any other sedan currently available for sale, they’ll argue.

I operate GoodCarBadCar.net as your humble North American auto sales analyst. Yet I have no idea if the 2014 Mazda 6 will succeed at a level where its predecessors couldn’t. But my oh my, it should. The midsize market, as a whole collective, corporate, combined, collaborative cooperative, should accept this car. It drives really nicely. It looks quite a bit better than it drives. It’s available with, hear ye this, a manual transmission. You might not know what this is, but it involves a third pedal and a shifter that moves all around, not just forward and back.

Of course, Mazda Canada didn’t offer me a chance to spend a week driving and living in a new 2014 Mazda 6 with a manual transmission. Nobody buys that car. I was, however, given an opportunity to spend a week driving an absolutely loaded third-gen Blue Reflex Mica Mazda 6. That was enough time for me to realize that, yes, this car should succeed. But it might not. Five reasons the market might completely accept this car are listed here, below the five reasons the market might continue to treat the 6 as an afterthought.

It’s not a Honda Accord. This means there are vibrations at idle. It also means the Mazda’s sliding armrest slides when I don’t want it to, the rotary control knob on the centre console doesn’t operate with the smoothness I’d expect, and the steering wheel control stalks are too heavily weighted. And the 6 doesn’t quite find the balance between ride quality and cornering ability that Honda always masters with the Accord. Without sacrificing much agility, Mazda’s standard 17-inch wheels would have probably undone a bit of the 6’s crashiness, which is only manifested during conflicts between the 19-inchers and the worst potholes.

It’s not a Ford Fusion.  This means the infotainment centre is slow to react to inputs. The Mazda usually struggled to understand my voice; TouchMyFord’s Sync has no such struggles.

It’s not a Toyota Camry. The Camry has instilled in many the belief that cars should isolate occupants from all that’s going on in the world outside. The Mazda 6 doesn’t want to do this, and thus it does not.

It’s not a Nissan Altima. In the Altima, everything outside is visible. The windows are big; the beltline not too high. In the Mazda, nothing affects visibility more than the low point at which the roof meets the front windscreen. This brings the rearview mirror low and very close to the driver. Meanwhile, the A-pillar meets the driver’s door glass very close to the driver’s left eyebrow, depending on how bushy it is. The eyebrow, not the A-pillar.

It’s not a Kia Optima. Topping out at $34,195 with a $2000 technology package, the top-end Mazda 6 is a couple hundred bucks more than a fully-optioned Optima. True, the equipment levels don’t entirely match up, but the Optima does have a 2.0L turbocharged four-cylinder with 90 more horses than the Mazda’s naturally-aspirated 2.5L. I wasn’t bothered by the Mazda’s lack of absurd Optima Turbo-like speed. I was bothered by the 6-speed automatic’s reluctance to kick down a gear or two when I prodded the throttle, and by the way it felt like it was producing 154 horsepower, not 184. 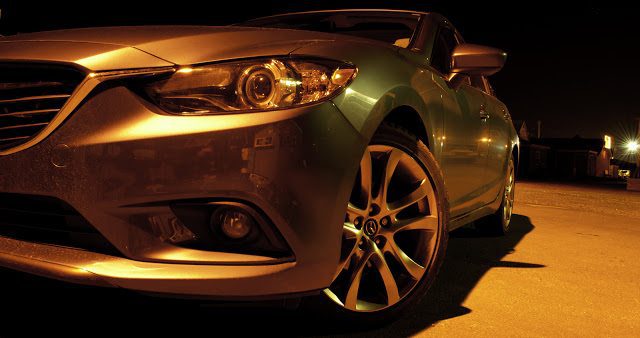 Now flip the coin. Why does the Mazda 6 deserve to be an incredible success?

It’s not a Honda Accord. It’s as though Mazda’s designers and chassis setup experts decided how they wanted the car to look and feel, and everything else was tertiary. While this means some items appear to be an afterthought – interior storage isn’t exactly top-notch, for example – the emphasis on dynamics is, at least to enthusiasts, priceless. The Accord feels normal, by comparison. Not painfully so. But it doesn’t look like it costs $60,000 and it doesn’t channel the S2000 in the way the 6 is inspired by the MX-5.

It’s not a Ford Fusion. SkyActiv technology hasn’t made the Mazda 6 lighter than the Nissan Altima, but it does weigh 244 pounds less than the Ford Fusion in base trim. In other words, the Fusion is like a 6 that constantly carries around a couple of teenagers. This pays dividends in fuel economy, but the Mazda’s light weight, more compact-like than midsize, is what makes it so tossable. The less Mazda 6 there is, the easier it is to move the Mazda 6 around.

It’s not a Toyota Camry. The Mazda’s style is its own, not something it inherited while part of FoMoCo under the influence of the then Ford-owned Aston Martin. Style is subjective, of course. And some may feel that a Fusion is the more stunning midsize sedan. It’s nevertheless hard to deny that the new Mazda 6 is timelessly good-looking. The Camry? It doesn’t really belong in this discussion, does it? 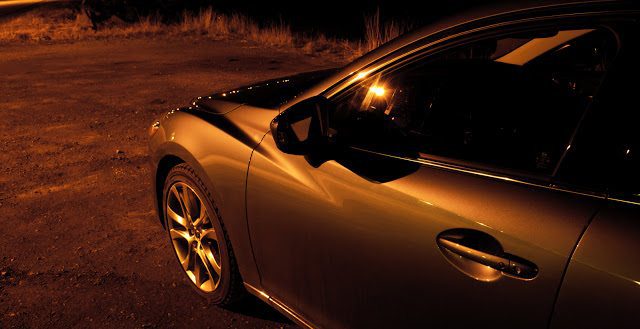 It’s not a Nissan Altima. The Mazda’s lumbar support, though a bit low, at least exists. The Altima is a surprisingly capable car when pushed, but it’s surprising nonetheless. The Altima doesn’t want to be pushed. The Mazda asks to be pushed. And the capabilities the Mazda displays when pushed on a proper road are far greater than my personal limits. Steering that shows a number of signs of life, body roll that’s kept in check, upshifts that snap off the way you want them to, and stability through corners that cause you to speed up when other cars are slowing down.

On that claim, the 2014 Mazda 6 that visited GoodCarBadCar for a week travelled 28 miles for every gallon of fuel consumed. Our time was spent exclusively in the city, but it’s worth noting that the 6 isn’t the first car to better its city rating while in GCBC’s safe keeping. Whether it was the 60 kmh cruises through un-trafficked streets or the downhill-in-both-directions nature of our typical course, the Mazda did prove to be more efficient than expected. And that mostly makes up for the perceptible power deficiencies. Pair the 2.5L with a manual transmission and, paddle shifters or not, the 4-cylinder/6-speed automatic combo’s power-sapping qualities would be forgotten.

Succinctly put, the Mazda 6 still isn’t for everyone. If you don’t like to drive, it’s hard to believe you’ll choose the Mazda, which doesn’t feature the biggest trunk in its class or the most capacious rear seat or the most refinement or anywhere near the most power.

If you don’t appreciate beautiful cars, much of the Mazda 6’s appeal will be lost on you.

But Mazda can’t help car buyers who don’t like to drive, nor can the small Japanese automaker do much about those who find inoffensive car design sufficient. So they’re sticking with the plan. Mazda has its own dictionary. And when you look up midsize sedan in Mazda’s dictionary, you do in fact see a picture of the 2014 Mazda 6. Shocking though it may sound, the Mazda dictionary’s picture for scenery uses Mount Fuji, and not the Cabot Trail. Poor Cape Bretoners.