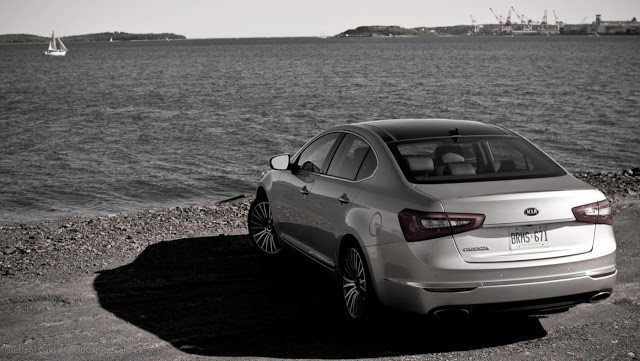 Automakers nevertheless refuse to neglect their large sedans. And in the case of this premium-trim 2014 Cadenza, Kia is returning to a segment that wasn’t lucrative for the brand during their last go round.

The 2014 Kia Cadenza, however, is most definitely not a reincarnation of that defunct Kia Amanti. We all want to forget the Amanti, and after spending a week in the latest big Kia, I want to remember the Cadenza. 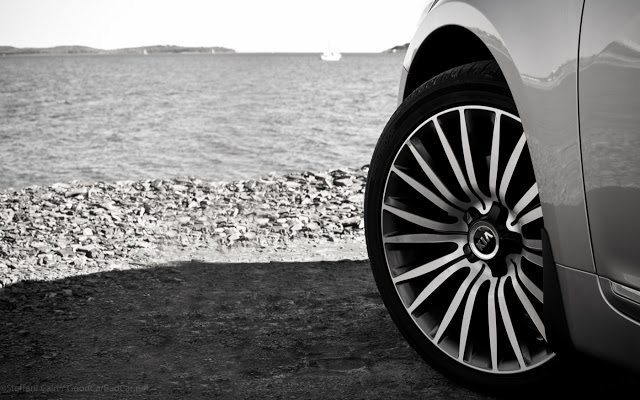 But Canadians don’t buy big cars, so there’s plenty of reason to believe that the absence of Cadenzas (not unlike the absence of Toyota Avalons, Buick LaCrosses, and Ford Tauruses) on Canadian roads will inevitably trigger forgetfulness.

Don’t blame the Cadenza for that, though. Kia built a very good ol’ fashioned big sedan; we’re simply too busy driving three-row crossovers to keep that anywhere near the forefront of our collective auto-buying mind.

How good, and how ol’ fashioned?

I’ll answer the second part first. The Cadenza is front-wheel-drive, so it rather obviously doesn’t feel like a traditional Detroit car from the 60s. But the comfort-oriented ride quality, capacious rear seat, massive trunk, and effortless power are more than a little reminiscent of classic American sedans.

As an interstate cruiser, the Cadenza is in its element.

There were issues with the big sedans of yore, you’ll remember. Likewise, the focus in the Cadenza is almost entirely placed upon comfort, and the idea of setting the car up to handle a twisty road under pressure was pushed to the back burner, and beyond.

That’s okay: the typical big sedan buyer won’t push his car hard on twisty roads; he might not even travel down twisty roads. (He is, after all, 82-years-old, and he only leaves his assisted living facility to eat at Swiss Chalet and to visit the urologist.)

The 3.3L, 293-horsepower V6 Cadenza has the horsepower to generate alarming speeds leading up to a corner, but that speed must be scrubbed off beforehand. Otherwise, the whole weight of the car is thrust upon the outer front wheel in an uncomfortable, yet typically big-car fashion.

The very low profile tires (245/40R19s) may be partially to blame for the sometimes stiff ride. Only a specific kind of bump was capable of making itself known, and only at the rear axle. The intermittent jouncing is only noteworthy because nothing else came close to sullying the utterly serene driving experience.

How good? Start inside, where the buttons for climate and audio are laid out in a conventional manner. There’s no get-to-know-you time. Material quality is very nice, but not as big a step up from the new Forte as one might expect. That’s not as much an insult to the Cadenza as it is a complement to the excellent Forte.

In my urban/suburban/rural neighbourhood, the Cadenza never felt nearly as big or as heavy as it actually is. In and out of tight parking lots, being flicked through city streets, whipped back and forth at King’s Wharf for picture placement, the Cadenza is, at worst, comfortable in its own skin and, at best, comfortable fighting in a size or two classes below its middleweight range.

After driving a Camaro ZL1 for a week, and preceding a Mazda MX-5 Miata, the Cadenza’s steering was bound to feel light, but it’s accurate and the wheel isn’t frightened into see-sawing left and right over severe undulations. There’s no feel, but the wheel didn’t cause me to feel as though I wasn’t a valued member of the team, as is the case in so many big, volume-brand sedans.

Best of all, there was no faux, half-hearted, ill-intentioned effort on Kia’s part to make the Cadenza remotely sporty. No part of this chassis setup suggests or even hints at the fact that Nürburgring was ever mentioned in a Cadenza R&D meeting.

Don’t mistake this for a hatred of sportiness: I’m currently driving that MX-5, and I’m loving its pure dynamics. But if the Kia engineering team had contemplated injecting a trace of track-worthiness into the Cadenza’s chassis, it would have only shone a light on the fact that the Cadenza isn’t meant for that kind of business.

In the hands of Jack Baruth, he of Camry lapping fame, the Cadenza would probably surprise us all with its propensity for tackling Eau Rouge with a full head of steam. In the here and now, Kia’s single-minded desire for the Cadenza to block out the world is reassuring. 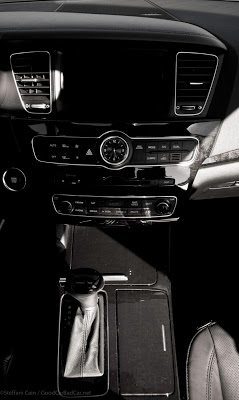 On that note, a slight lack of straightahead stability on the highway is a bit disappointing, but that, too, could come down to a tire/wheel package that’s more suited to a Boxster than an Amanti successor.

Aside from some periodic and surprising stiffness at the rear and the mushy brakes, it’s hard to put a finger on anything the Kia Cadenza gets flagrantly wrong.

Much of what the Cadenza offers is better than what many of its rivals offer most of the time.

Yet as a new entry in a low-volume but very established sector, the Cadenza’s knack for doing very little wrong and doing lots of stuff right is sadly not enough. For $47,000, I want a car to make me feel special, or at least be special in some way.

The Cadenza is quiet, but it’s not quiet like a $41,000 Lexus ES350. It’s powerful, but not powerful like an employee price-discounted $45,000 Ford Taurus SHO. It rides and handles well enough, but it doesn’t have the rear-wheel-drive feel of Hyundai’s $42,000 Genesis.

The interior is laid out conveniently, the seats are comfortable, and there’s room for five, but the Cadenza’s insides don’t stand out from the pack the way the interior does in Chevrolet’s new fully-optioned $46,685 Impala.

It also may be the best-looking car in a handsome Kia lineup, but good looks are common in this category. We expect nothing less. 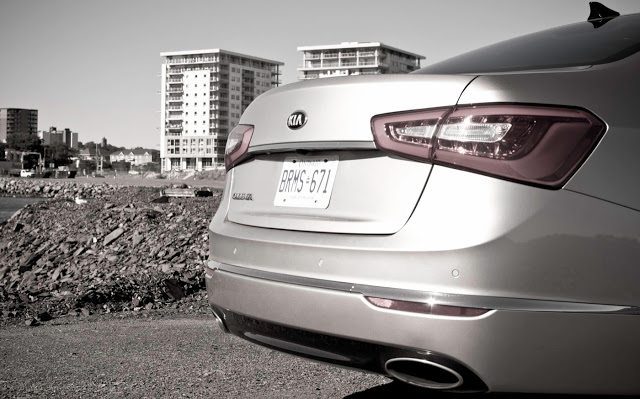 On the flip side, the Cadenza is quiet, powerful, comfortable, convenient, and stylish, and although it may not be class-leading in any of those categories, it scores highly on every point.

Indeed, at its sub-$40K point of entry, the Kia Cadenza’s value quotient, even with fewer features, may be more prominent, and it certainly won’t be challenged by as wide a variety of hugely competitive luxury cars.

Regardless, for buyers who don’t want to drive the same car their neighbours are already driving, the 2014 Kia Cadenza offers a measure of uniqueness untouched by the likes of any of its competitors.