2013 is the fifth model year in the Dodge Journey’s existence, but it’s very different from the Journey that debuted in the early part of 2008. It doesn’t look that different on the outside, but its much improved interior and thoroughly advanced V6 engine, working with the flexible seven-seat layout, make the Journey a more compelling value-based purchase.

Yet this Journey, the one Chrysler Canada delivered to GCBC Towers in June, is a heavily optioned R/T Rallye. Not surprisingly, the proletarian roots of a vehicle that was intended to be, at least in part, a crossover successor to the Dodge Caravan minivan crawl through the cracks and are made more apparent when it costs as much as a BMW X1.

Like a blonde whose brunette roots come through days after her salon-quality dye job, the Journey’s blue collar origins are obvious but not all-consuming. Yes, the Journey traces its foundational elements back to the unloved Dodge Caliber, but using that knowledge to arrive at a quick verdict would be to ignore much of what the Journey R/T Rallye brings to the table. 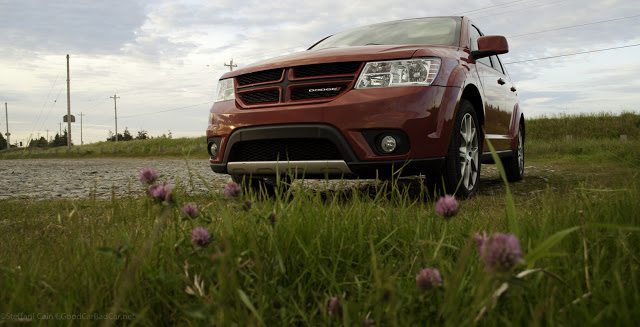 Top of the class? No, it’s not. Nevertheless, there are reasons why thousands of buyers in the United States – and especially Canada – consider the Journey to be an appealing combination of size strength; at the right price. As in GCBC’s recent write-ups on the Mazda 6 and Ford Focus ST, this review of the 2013 Dodge Journey R/T Rallye examines two sides of the same coin: the reasons why so many consumers would choose the Journey R/T Rallye, and the reasons why so many wouldn’t. The latter comes first.

The Journey R/T Rallye isn’t a Mazda CX-5. You read promotional material about sport suspensions, and then you experience them. All too often, an allegedly improved chassis proves to be disappointing. That doesn’t prove to be the case in the R/T Rallye, not at all. But it’s no CX-5. The key difference lies in the CX-5’s interactivity, its ability to tell you what’s going on, and the swiftness with which it can change direction. Where the CX-5 can be tossed around with an alarming amount of abandon, the Journey can power into, hold on through, and power out of a corner in a way that will impress its driver, discomfit passengers in the second row, and strain third row occupants. It’s a level unreached by most small crossovers, but it’s not as fun as what you’ll experience in the feelsome two-row Mazda. The major letdown is the Journey’s steering, with its broad dead spot on centre and the way it feels disconnected from reality when you’ve applied plenty of lock.

The Journey R/T Rallye isn’t a Ford Explorer. Above $35,000, the Journey R/T Rallye offers more equipment – heated steering wheel, rear DVD, navigation, backup camera – than you will find in most properly midsize SUVs and crossovers. But sacrifices will have to be made elsewhere, most notably in the size of the cabin.

It’s not an abstract comparison: you can have a decently equipped Explorer for the price of a Journey R/T Rallye. Access to the third row is fine in the Dodge, as the second row slides and tilts forward, but once seated you’ll find that the amount of knee room isn’t matched by the foot space, which is constricted. As is the case with the Mazda 5, the knowledge that little luggage can be toted with seven people aboard is depressing. The Journey is a five or maybe a six-seater for travelling; a seven seater only if its owner has no intention to carry stuff.

The Journey R/T Rallye isn’t a Dodge Grand Caravan. You know the Grand Caravan is the properly big Dodge family vehicle, but it’s hard to grasp just how much space you’ll lose in the Journey unless you park them side by side, walk in one sliding door, out the other, and into the Journey through the aperture created by its front-hinged doors. If the Journey’s comparative lack of space doesn’t put you off, its all-around lack of a certain something will. Call it solidity, structural stability, an overarching sense of permanence: whatever it is, the Journey doesn’t have it in the same quantities as Dodge’s two best products, the Ram pickup and the Grand Caravan.

Parking lots reveal this in the worst way. Turn from a road that slopes downward into a driveway which slopes upward and then traverse a few speedbumps and the Journey produces that scrunch sound you didn’t think you’d hear in anything other than a Chrysler 200 Convertible. A squark here, a groan there, it never feels like the latest efforts from Chrysler’s minivans, or the minivans crafted by Honda or Toyota. The R/T’s materials aren’t a letdown after the Grand Caravan, but the seating position had me feeling like I was falling through the windshield. The centre armrest felt like it was built to deter my elbow from resting. Simply put, the Grand Caravan is better at being a minivan than the Journey is at being a small crossover.

The Journey R/T Rallye isn’t a Mazda CX-5. The CX-5, like the CR-V, RAV4, Tucson, Rogue, and Tiguan, isn’t even available with more than 200 horsepower. (They don’t offer third rows, either. Nor do the Chevrolet Equinox, Ford Escape, GMC Terrain, non-XL Hyundai Santa Fe, upcoming Jeep Cherokee, Kia Sportage, and Subaru Forester.) Better than the 3.6L’s total output is the way in which it makes its power. There’s just enough low-down torque to impress, but the way the Pentastar V6 gets into a groove as the revs rise is the really admirable aspect.

There’s a penalty for this: the Journey V6’s city fuel economy is way down at 16 mpg, same as the Ram V6 with its 8-speed automatic. Indeed, the Journey is rated at 24 mpg on the highway, equal to the CX-5’s city rating, which is down six mpg from the CX-5’s 30 mpg highway rating. But one would hope the CX-5 and its like-minded two-row crossovers would use much less fuel – they’re much less powerful. In both mundane and extraordinary circumstances, they feel it, too.

The Journey R/T Rallye isn’t a Ford Explorer. The Explorer feels and handles bigger, because it is bigger. Bigger isn’t always better. The Explorer is five inches longer, seven inches wider, four inches taller, and nearly 500 pounds heavier. Yet it makes do with just seven extra horsepower and five fewer lb-ft of torque. And while specifications suggest a huge gap in interior space between the bigger Explorer and smaller Journey, the atmosphere of space in the Journey, with its high roof and expansive second row, shrinks that gap. You’d pay for extra space, as well. At the same price point, an Explorer XLT won’t have this Journey R/T Rallye’s leather-clad seats, backup camera, heated steering wheel, 19-inch wheels, or all-wheel-drive.

The Journey R/T Rallye isn’t a Dodge Grand Caravan. Say what you will about the Grand Caravan’s people and cargo-hauling abilities. It’s still a minivan. It feels really heavy. It’s challenging to park. And it’s still a minivan, the best type of vehicle in the world, but one that very few people want. The Journey, propelled by the same V6 as the Grand Caravan, feels wonderfully powerful above 3500 rpm, it handles in such a way as to not feel heavy, it doesn’t feel vast in a small parking lot, and it’s not a minivan. With built-in booster seats, a second row that moves easily to allow third row access and to enable parents to reach squabbling toddlers, and third row seating that folds effortlessly, the Journey is a semi-minivan, without the minivan image.

Lacking a semester at finishing school, the 2013 Dodge Journey R/T Rallye attempts to make up for what it’s missing with features and horsepower. The extent to which you desire red-stitched leather seats and 283 horses will define the degree to which the Journey has succeeded in making up for its deficiencies.