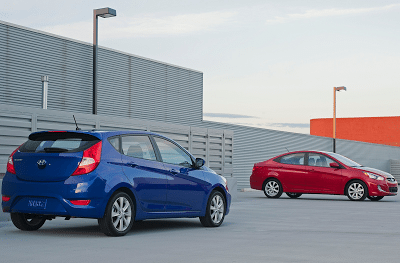 The New York Auto Show hosted the non-Coachella U.S. debut of the 2012 Hyundai Accent today. At the very least the new Accent is a huge leap forward over the old model. At best, arguably, the Accent will be best-in-segment, alongside its brother from another mother, the 2012 Kia Rio.

GoodCarBadCar.net has already displayed an image comparison of the 2012 Hyundai Accent and 2012 Kia Rio. Instead of spending too much time analyzing the subcompact’s style, we’ll just straight to the spec sheet before looking at the 2012 Accent’s U.S. pricing. (Prices are sure to be different in Canada, but the spec chart could be too, so Canadian readers shouldn’t assume everything will stay the same.) You’ll find pictures in the Gallery after the jump.

In GLS, SE, and GS trim levels, the 2012 Accent comes with a 138-horsepower (up 28), 123 lb-ft (up 17) 1.6L 4-cylinder, identical to the size of the dying Accent’s engine. Featuring direct injection and dual continuously variable valve timing, the relatively powerful Accent is said to deliver 30 miles per gallon in the city and 40 miles per gallon on the highway, fuel economy not unlike that of its larger sibling, the 2011 Elantra. Power is sent to the front wheels through a 6-speed auto or 6-speed manual transmission.

The 2012 Accent GS and SE hatchback is 162 inches long, 66.9 inches wide, 57.1 inches high, on a 101.2-inch long wheelbase. The only real dimensional change with the GLS sedan is length, at 172 inches. Rear legroom in both the sedan and hatch is 33.3 inches. The sedan’s trunk holds 13.7 cubic feet, its passenger compartment holds 89.7 cubic feet of…. passengers. With the rear seats up, the 2012 Hyundai Accent hatchback has a cargo capacity of 21.2 cubic feet. That figure increases to 47.5 cubic feet of cargo capacity when the Accent’s seats are folded. The passenger compartment is narrowly larger than the sedan’s at 90.1 cubic feet. Accents will weigh between 2396 pounds (GLS sedan with a 6-speed manual) to 2654 pounds for the 6-speed automatic-equipped hatchback. The current Accent weighs between 2365-2533 pounds.

Hyundai clearly spends most of your money on safety equipment. ABS, EBD, stability control, 4-wheel disc brakes, and six airbags are standard. Power windows, mirrors, keyless entry, and air-conditioning are not, although they are available as options in convenience packages. Step up to the SE or GS, however, and in addition to the aforementioned features, you’l gain a six-speaker stereo, driver’s armrest, height adjustable seat, and on the SE 5-door, sport-tuned suspension, cruise, Bluetooth, leather-wrapped shifter and steering wheel, and bigger wheels and tires.

As a reference point, the outgoing 2011 Hyundai Accent 3-door hatch starts at $9985. That bargain basement model basically disappears. The current GS and SE range from $13,695 to $15,345 before a 4-speed automatic is taken into account. That Accent was not only smaller but less powerful, less efficient (29/34 mpg), and completely lacking in safety equipment. The current Accent GLS sedan is priced from $13,695 or $14,695 as an automatic. If the 2012 Accent didn’t look strong enough already, the soon-to-be-defunct third-generation Accent certainly helps strengthen its image as a mighty good deal.

Why so much attention to a new small car like this Accent when GoodCarBadCar.net generally focusses only on Sales Stats? To put it bluntly, The Good Car Girl is a very likely paying customer. But some sales data has been thrown in after the jump to stick with the main mission.