There’s a girl I know well who, upon seeing your new houndstooth shoes, will likely say, “Those are fun.” She’ll say so very enthusiastically.

In 1994, I rode what was the tallest and fastest wooden roller coaster in the world, The Rattler, at Fiesta Texas in San Antonio. It was fun. My spine never recovered.

On the rare occasions that the whole Cain family is together, four or five of us will play Scrabble. We place letters on a board in word form. We calculate points. We argue about rules that have been set in stone for decades. And we manage to have fun.

After returning from a long vacation in Îles de la Madeleine and Prince Edward Island, a bunch of Fiat 500s had suddenly appeared out of thin air (also known as Toluca, Mexico, 8750 feet above sea level). Setting aside GCBC’s Sales Stats theme for a day, I had to drive the new Fiat 500. Had to. What could possibly be more fun than starting the work week by testing an Italian hatchback? Read on after the jump for a lengthy Driven review of the 2012 Fiat 500 Sport Automatic.

If living with scantly usable rear seats and moderate cargo volume is alright with you, there isn’t a new car out there at this price more enjoyable than the Fiat 500 Sport. Excluding the less expensive 500 Pop and more luxurious 500 Lounge, the 500 Sport engages in a way drivers of other subcompacts won’t understand. Begging to be pushed hard through bends, craving a faithful marriage between throttle and carpet beyond 4500 rpm, yearning for a firm thrust of the brake pedal, the Fiat 500 establishes itself as an entertaining steer.

It doesn’t bother to pause and say please before demanding you carve into a corner with an extra helping of aggression. Body roll is not in the 500 Sport’s dictionary of dynamic terms. The Fiat’s ability to turn-in is so perpetually close at hand you’ll think it’s contagious. This is the sort of car that will have you steering your grocery cart tight up against the Campbell’s Soup display as you head from the juice aisle to the frozen food section.

Steering feedback is at the very least adequate, while the wheel lightens agreeably during tight, low-speed maneuvers. It’s a mixed bag of steering goodness… in a good way.

The same thing could be said of the ride and handling balance. Though the 500’s wheelbase measures just 91 inches, there’s far less jigliness than I expected. Traversing rough, weathered roads in downtown Halifax, the Fiat 500 exhibited decidedly less crash and bang than you’d encounter in its corporate cousin, the awful Dodge Caliber. Smooth may not be the word a Lexus RX350 driver would use when describing the Fiat’s on-road comportment, but I’d be willing to bet good money that the Cinquecento’s ride will be more comfortable than you’re anticipating.

Pair the decent ride with the 500’s taste for twisties and suddenly we have a car that’s worth the premium over spacious subcompacts. It’s a bit odd at first, the 500’s cornering verve, because there’s a sense that you’re sitting on the car, rather than in it. The feeling that you’re in a Euro-developed city car is so obvious, particularly when steering through a parking lot, that you’ll want to deny the 500 Sport the opportunity to prove its mettle. But it’s not just the abrupt turn-in that eventually grabs you, it’s the 500’s responsiveness mid-corner, after it takes a set and holds on with no fuss. Land a front wheel in a rut at the apex and the 500 remains relatively undisturbed. 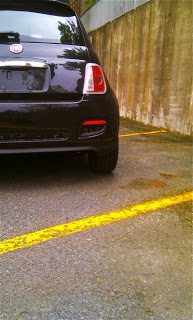 Giving the Fiat a longer leash only highlights its capabilities. Downright normal and rather slow at five-tenths, the 500 responds to hard driving with an appreciable sense of zeal, like an executive chef who can’t turn out a decent hot dog but will, under duress, and with the best ingredients available, present a feast fit for kings. Push me, the Fiat 500 says, I can take it. Then push me some more.

You’ve gone round corners faster before, surely you have, perhaps in a car that easily fits your friends and produces twice as much horsepower. You’re having more fun this time, though.

The Fiat 500 isn’t a Nissan GT-R or Bugatti Veyron, in case you hadn’t noticed. Together with a properly engineered chassis, you, yes you are what’s stringing this series of corners together. You’re moving along swiftly enough, thanks, and you’re quite comfortable, and it’s not as though you’re on the verge of driving off a cliff. But you’re not all that insulated from the goings-on. Thus, you’re very certain that without your skills, without your willingness to drive at nine-tenths instead of six-tenths, this would just be a small hatchback from Toluca. Instead, it’s apparent that you’re driving a Turinese relative of the Maranello gang. At least to your eyes. In your hands. On this road.

Driving small, really cheap new cars hasn’t been this enjoyable in eons. Don’t kid yourself. Fiat 500s aren’t Lotus Elise copies. You’re not going as fast, for one thing, and there’s not enough communication coming through the wheel, not a terrific amount of discussion between the chassis and the seat of your pants. Moreover, as we’ll discuss later, the 500 Sport doesn’t feel quite as mature or adroit as the Mini Cooper when really pushing on.

Pulling away from rest might make you feel like getting out of the 500 and…. pulling. My sister used to beat her fist on the dashboard of her brand new purple ’96 Hyundai Accent, begging it to hurry up and get a move on. She would bang the dashboard of the 101-hp 2012 Fiat 500 Sport, as well. It’s not fun when she does things like that. 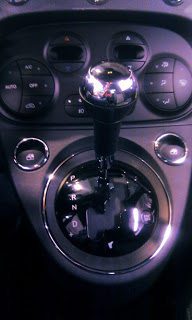 This 6-speed automatic is a marvel compared with the slushbox in every small, meagerly-powered car I’ve ever driven, millions of light years ahead of the 4-speed automatic (with overdrive!) in that ancient Hyundai. Shifting for yourself will speed things along smoothly and swiftly. Push up to shift down, pull back to shift up. Pressing the throttle closer to the mat only inspires the Fiat 500’s 6-speed to respond with increased awareness.

This transmission certainly tries to make the most out of the 1.4L MultiAir’s 98 lb-ft of torque, but revs are what the little mill really desires. Maximum power doesn’t occur until 6500 rpm, max torque isn’t produced until 4000 rpm. In another dimension I’d believe aliens sweep in and fit the 500 with the smart fortwo’s 1.0L triple (although this 1.4L idles rougher) under 3500 rpm before replacing it with Mini’s 121-hp 1.6L once revs climb above four grand. Pressing the Sport button above and to the left of the shifter alters throttle response a bit, but hardly enough to notice in daily driving. The upcoming Abarth 500 should remedy these complaints.

Disappointing though the engine will be in scenarios which require brief spurts of zero-to-thirty acceleration, the Aisin automatic transmission never failed to impress. How many small cars exist for which such a statement applies? Remember, the EPA’s fuel economy estimates suffer severely with the automatic, and the Fiat wants to drink premium fuel, too.

Fun won’t always be the name of the game for owners. The 2012 Fiat 500 wasn’t placed in The Good 12 for practical reasons. The Cinquecento elicits an emotional response. It’s stylish; cute yet handsome; and emphasizes driving rather than transporting. Nevertheless, the disappointment was keenly felt when, with the front seat arranged for my 5’11” frame, no human could be deemed even semi-comfy in the back.

Both of the 500’s front seats have a huge range of motion, so if front seat passengers are vertically challenged or able to ride with legs askew, there is leg room to be had in the rear. Cargo room, 9.5 cubic feet or 30.1 cubic feet with the seats folded, is entirely acceptable for a car of this size. But that backseat? Only Pomeranians will have fun back there.

While we’re on un-fun topics, consider the lever you must pull to allow rear seat ingress. It’s going to break. It’s probably going to break soon. I tested this lever twice per car on a handful of 500s and pulling these levers felt a lot like forcing open a locked fuel filler door on a smart fortwo, another un-fun thing I’ve done. Once the lever’s yanked and the seat is temporary displaced, getting into the back is made easier by the tall roof, but it’s not an easy task.

In the black Fiat 500 Sport I drove, the glossy black interior was as dusty and fingerprint-oppressed and would presumably remain as dusty and fingerprint-oppressed as a black Yamaha baby grand in a kindergarten classroom. Visibility is terrific, except during the left-side shoulder check. Fiat incorporated a secondary door mirror to help out. Learn to use it, because in all frankness, there’s no point in bothering to shoulder check on the driver’s side. All you’ll see are your own car’s pillars. That’s scary. Also, it’s not fun.

Comparing the Fiat 500 directly with the Mini Cooper is necessary but barely relevant. Yes, the 500 Sport starts at $18,500 in Canada, only $3450 less than the Mini, but the 500 range bases at 27% less than the Cooper Classic. Yes, it is GoodCarBadCar.net’s belief that the Mini is a better steer, built to a higher standard, and continues to be the more iconic machine, but it’s not that much better. At $15,995, the Fiat 500 Pop is only a thousand dollars more than a basic Toyota Yaris.

Currently, Canadians seem to think the 500 is worthy of their attention; Americans slightly less so. Fiat sold 678 500s in Canada in May, 27 of those were 500 Cabrios. That’s more than Scion’s three-car sales total, or more than Mini, Saab, and Jaguar put together. (South of the border the Mini brand out-sold Fiat by more than three-to-one.)

Something tells me that not all of the 5134 buyers who have acquired a Cinquecento in North America so far bought it for its admirable dynamic repertoire. Regardless, they all must be convinced the Fiat 500 is fun, like new Fluevogs, playing all seven letters in Scrabble, or a headache-inducing ride on The Rattler.