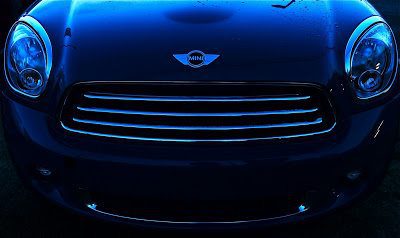 Irrational on so many levels, the 2011 Mini Countryman recently tested by The Good Car Guy willingly presents potential buyers with countless glaring reasons to strongly consider other realistic, established, normal cars. Seriously, there are only four seats in the Countryman. Cargo volume is scant, 2.8 fewer cubic feet than you’ll find in the back of a 2011 Chevrolet Aveo hatchback. Rock-hopping is about as likely for the Mini Countryman driver as it is for a drunk girl in heels, as judged by the Mini’s 5.86 inches of ground clearance. Even in turbocharged form, the ALL4 Countryman S’s extra weight over the regular Cooper S (540 additional pounds) prevents far too many of the Mini’s 181 horses from leaving the stable.

And yet, after an all too brief drive in a 2011 Mini Cooper S ALL4 Countryman, I loved it. Moreover, the drive was revealing enough to make me believe you would, too.

At least, you’d love it until the BMW/Mini sales representative told you the price. So before we delve into the deeper aspects of what it’s like to drive the new Mini SUV/SAV/CUV/tall hatchback, let’s talk about money, an unfortunate imperative.

Without even taking “packages” into account – and Mini does love to sell its packages – the 2011 Mini Cooper S ALL4 Countryman costs $34,400 in Canada. Add $1490 for the top-notch shiftable 6-speed automatic and your next turbocharged, all-wheel drive hatchback now costs about $4000 more than a DSG-equipped 5-door 2011 Volkswagen GTI. The price for this Countryman in the United States starts at $27,650 but jumps northward by another $1250 when the auto is included. Countrymans start at $27,850 and rise to $32,650 for Cooper S Countrymans lacking all-wheel drive. Price now in perspective, we can consider more comfortable subjects after the jump.

My experience with the Mini started out with a couple of drive-bys, then a look inside the cargo bay a few days later, and eventually a short trip in the passenger seat before my own rear end was parked in the driver’s chair. Each time I see the Countryman I like it a little more. Although tremendously blunt-nosed, particularly in comparison with the base Cooper hatchback parked beside it, the Countryman looks exactly how it should look in order to be an SUVesque Mini, barring the messy roofline dip behind the C-pillar and the ghastly dark-coloured side-repeater housing near the door mirrors. Surprising the Countryman is not. This is a Mini on short stilts with extra doors.

As for that cargo bay, it’s small but perfectly formed, honestly. Not only is there more space than the 2011 Nissan Juke The Good Car Guy already reviewed, the Mini’s space is squared off and infinitely more useable. The passenger seat? Mini’s are built to be driven, not driven in. British auto manufacturing has Rolls-Royce for that. The glovebox is close and your toes will be pointed to the sky. There is an array of pretty things to touch, not the least of which are luxo materials covering every thing in sight. Perhaps of equal importance, rear seat passengers have plenty of headroom and footroom with kneeroom.

Door shut, strapped in, ignition on, shifter pulled back, and wipers on, I pull away from the curb noticing instantly that the Mini Countryman is no featherweight. Mind you, I didn’t floor the throttle on the first getaway, but there’s a settled sense, not altogether bad, that you never feel in a Mini Cooper or for that matter, a smart fortwo. This comparison is unfair in a way, both to the regular Cooper hatchback and to the 5-door Countryman. For the vast majority of buyers, these aren’t both viable purchases. In contrast to most compact hatches, the Countryman’s steering is accurate; even alive. Granted, the drive was short-lived, yet it didn’t take long to see that the Mini Countryman was agile in a way few mainstream tall hatches even dream of being. The engine, transmission, and suspension work in unison to convey the impression that the Mini Cooper S ALL4 Countryman remains permanently set on some moderately important DEFCON level. Ready to pounce on unsuspecting corners, prepared to rev high in the flash of a millisecond, flickably shiftable and rather tossable whenever the mood strikes.

Again, for drivers supersizing their Mini Cooper, these characteristics will seem dulled, not heightened. Today’s car owners are typically driving machines which are just as heavy, if not significantly heavier than the Countryman. These vehicles possess dynamic responses more akin to Caterpillars than cats. Minis are often likened to go-karts. While you wouldn’t say that about the Mini Countryman, you would say the Countryman is the Mini of SUVs… and Minis, remember, are go-kart-like. That’s two degrees of separation.

City dwellers, and even most suburban and rural dwellers, spend far more time in their car than they do outside looking at the black-on-white exterior. Also, though we’d love to live in a universe where this wasn’t true, most of our drives are routine slogs rather than races at Circuit Mont Tremblant. Think about it this way: if you’ve got the cash to splurge on a loaded Countryman like the one Driven by The Good Car Guy even though the Nissan Juke had caught your attention, you’ll enjoy the Mini way more in routine daily circumstances. For sheer driving pleasure, I’d give the nod to the Juke. There’s a tremendous sense of urgency with the Nissan, a chomping at the bit quality the Mini replaces with the classy aforementioned on-alert status. The Juke also feels quicker, even if isn’t in a straight line race, simply because its low-down torque evidences itself freely, despite numbers that tell a different story. Nissan’s dynamic set-up is more confident and quite a bit less crashy on rough roads – there’s firmness and poise in equal measure while the Mini makes a firm ride preeminent and throws in a dose of poise for taste-testing.

Oh, but the Mini sure feels more expensive, even if you were to strip away all the options and standard features. The Countryman is a quality piece, therefore making the Juke feel cheap, tinny, and crude. The good news? Two stylish, tall hatchbackish SUV/crossover alternatives are both ridiculously fun to drive. Your budget may rule one out; your social sensibilities may rule out the other. And to make clear that this review was never intended to turn into a Mini Countryman vs. Nissan Juke comparison test, we’ll make a few other Mini-related points as clear as day.

Expensive? It would be easy, easy I dare say, to take the Mini from dearly priced to prodigiously prohibitive because of packages designed to force you into taking options by the bucketload. Add $500 for Absolute Black Metallic paint. Carbon Black lounge leather costs $1900. Then there’s the $450 each for style and visibility packages, $750 for convenience, $890 for both a lights pack and sound pack, $1680 for a sport package with pretty wheels, a $1200 tech package or $1750 for a comprehensive navigation package, and $1900 for comfort. I know, you probably thought visibility, comfort, and lights were free… but not at BMW-run Mini dealerships. That’s a $47,200 2011 Mini Cooper S ALL4 Countryman.

Snicker at the price if you must – but I’m sure you already have. By pricing the Countryman in the nether regions of non-luxury brand territory, the Mini’s styling is forced to play a greater-than-usual role in attracting consumers, a far stronger role than its fun-to-drive nature. After all, the 300-horsepower 2011 BMW X3 xDrive35i starts at $46,900 in Canada.

Mini sales were up less than 1% in the United States last year to 45,644 during a period in which the U.S. market increased by 11.1%. The Canadian new vehicle market grew 6.6%; BMW Canada’s Mini sales increased 5.9% to 4501. There’s no doubt the Countryman will add to these totals, perhaps at the expense of a few Mini Cooper Clubmans. But BMW’s Mini division isn’t keen on being a volume-driven brand. Mini is a profit hound. Alongside the standard bearer, Mini is selling the Convertible, Clubman, and Countryman, all sharing a parts bin full of expensive elements like engines, transmissions, and core foundational architecture elements.

It’s hard to go wrong with that strategy. Indeed, the 2011 Mini Countryman is right on so many levels.