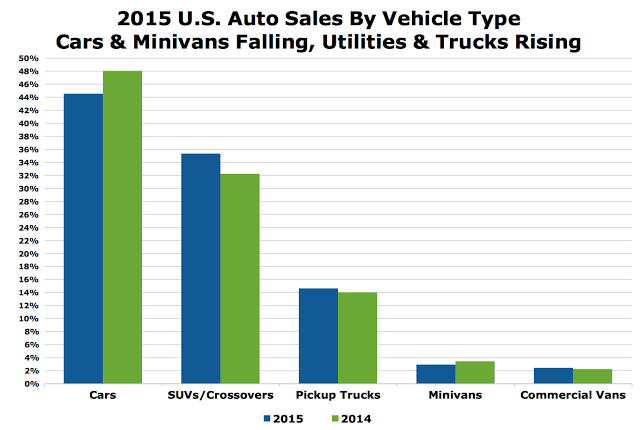 Passenger car sales declined by 2% in the United States in 2015 even as the auto industry reported record overall new vehicle sales.

Part of the credit for the increase goes to the pickup truck and commercial van sectors, where sales jumped 10% and 19%, growth far in excess of the industry’s 6% uptick.

But the 16% year-over-year improvement reported by SUVs and crossovers, equal to 850,000 extra sales compared with 2014, was the real engine powering the train forward. As a result of the huge uptick in SUV/CUV sales, the sector’s share of the overall industry jumped from 32% in 2014 to  35% in 2015.

If passenger car volume slid a further 2% in 2016 and SUV/CUV sales once again jumped 16%, cars would be outselling utilities by fewer than 40,000 units per month over the next  year. If the trend held one year longer, cars would be significantly less popular than SUVs and crossovers as soon as 2017.

December certainly suggested the trend will only strengthen. Cars accounted for slightly less than 40% of the U.S. auto industry’s sales in December 2015 as SUV/crossover market share climbed to nearly 38%.

Indeed, depending on which vehicles you tabulate with passenger cars and which vehicles you consider to be an SUV/crossover, it’s possible that utility vehicles already outsold cars in the U.S. It’s become a regular feature in the Canadian auto industry at the tail end of the year, as well.

As for the top of the ticket, SUVs and crossovers are led by the Honda CR-V, Toyota RAV4, Ford Escape, Nissan Rogue, and Chevrolet Equinox.

Those five vehicles collectively generate a full quarter of all SUV/crossover sales in America.