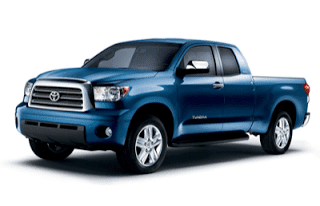 And America’s best-selling vehicle, the Ford F-Series, reported a 13% decline, a 105,450-unit drop in sales. Combined with the Chevrolet Silverado, Dodge Ram, GMC Sierra, and Toyota Tundra, America’s five leading pickup trucks went from accounting for 12.9% of the U.S. automobile market in 2006 to… 12.8% in 2007. That drop would have been much worse had it not been for the huge increase in Toyota Tundra volume, an increase which amounted to 72,047 more truck sales.

America’s best-selling car was again the Toyota Camry. Sales of five of the six leading passenger cars – Camry, Honda Accord, Honda Civic, Chevrolet Impala, and Nissan Altima –  posted significant improvements in U.S. volume. America’s top-selling SUV from 2006 fell to a ranking of fifth, and 28th overall, in 2007. This made way for three small utilities podium placements, and for the massive Chevrolet Tahoe to claim fourth spot. Meanwhile, the top-selling minivan was the 15th-ranked Dodge Grand Caravan. No vehicle in the top 20 recorded a decline worse than the most popular minivan.

As you not-so-fondly remember, back in 2007 there were a fair number of vehicle brands which no longer exist. The Pontiac G6 was the 21st-best-selling vehicle in America in 2007. The Saturn Vue ranked 55th. Mercury’s Grand Marquis nudged its way four spots inside the top 100. Twelve spots back of the Mercury was the Hummer H3. The top Saab was the 164th-ranked 9-3. And Isuzu’s pickup trucks, the i-280 and i-350 led the way for the forgotten Japanese brand in 232nd, nine positions ahead of the Ascender, which didn’t ascend.

The exhaustive table below is sortable, so as much as it’s a ranking of U.S. vehicle sales in 2007, it’s also a ranking of year-over-year improvements. Or, as many of you undoubtedly will, you can sort it alphabetically by vehicle name to see the Saturns, Pontiacs, Saabs, and Mercurys grouped together. (Mobile users can select “View Web Version” at the bottom of this page to gain access to the sortability function.)

Historical monthly and yearly sales figures for every current model can be accessed by making a selection at GCBC’s Sales Stats page. More current U.S. vehicles sales rankings are published each and every month, and there are links to those lists and many others at the Best Sellers page.