Charting U.S. Sales Declines For Toyota and Honda In 2011

Honda and Toyota sales fell 28.5% and 22.8%, respectively, in July 2011. It’s not as though the U.S. auto market is in prime operating condition, but America’s two favourite Japanese automakers aren’t struggling to sell vehicles because of economic concerns in the United States.

Ever since Japan’s March 11 Tōhoku earthquake, corporations of all kinds have faced the same kind of problems ordinary Japanese citizens have encountered. Getting life, or production, back to normal in the wake of the post-quake tsunami and evacuations which can be traced back to a nuclear disaster isn’t a task for the fainthearted.

Year-to-date, through seven months of 2011, Toyota is down 6.2% and Honda is down 2.4%. (Toyota’s premium Lexus brand is off 18.6%. Toyota’s youth-oriented Scion brand is up 17.4%. Honda’s premium division, Acura, is down 5.5%.) The first quarter wasn’t the problem. It was the second quarter and the beginning of the third quarter, a period in which supply at Toyota and Honda dealerships was scarce, which really harmed their ability to report normal sales levels. How can a company report level or increasing sales when they don’t have cars to sell?

It’s not as though Toyota and Honda are the only ones struggling to succeed during the last few months. Japan’s prime minister just resigned, for example. Nevertheless, it’s fair to say that the troubles faced by Toyota and Honda over the last three months have provided an opportunity for other automakers to grab market share, just as Prime Minister Kan’s resignation opens the door for Yoshihiko Noda. Evidence of that fact is obvious. Rather than their standing amongst global rivals, what Toyota and Honda really want to see recover are the sales volumes of years past.

The charts below imagine falling sales as if falling sales are coloured columns which rise and… er, fall. You’ll see five different Toyotas, four different Hondas, and the Acura division as a whole. May 2009, May 2010, and May 2011 can be seen in blue, chronologically; moving from the left to right. June is red. July is green.

The declines are obvious. If the numbers from Best Seller lists and U.S. Auto Sales By Brand posts weren’t grabbing you, these charts will go a long way to convincing you that supply issues at Toyota and Honda dealerships over the last three months or so have utterly crushed the autumn vacation dreams of many salesmen. That news shouldn’t be taken lightly. Automotive News says August won’t be much better. 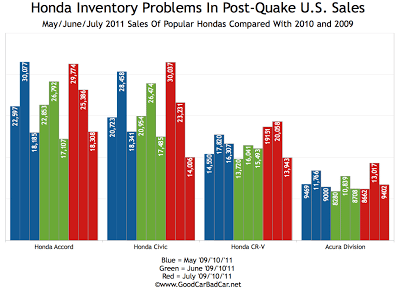