Stuck in the middle with Volkswagen’s Gabbit, the Subaru Impreza is just trying to find its place in this world, having grown up – and out – while also getting leaner and fitter.  The Good Car Guy was given the opportunity to drive the new Subie today, a car which has come under criticism even here at Subaru-loving GoodCarBadCar; more for what Subaru has done with it rather than to it.

The WRX has been de-masculinized.  The latest STi hasn’t moved the game on in the way Mitsubishi’s Lancer Evo has, and the garden variety Impreza has lost its ugly duckling cuteness and replaced it with a bland, forgettable, miniature-Camry appearance.  Has Subaru lost its way with the Impressyou?
Frankly, Subaru’s design department clearly didn’t catch the fizz from the engineers responsible for the dynamics of this compact sedan (and hatch). No, the Impreza isn’t insanely quick.  Its steering possesses a strange honey/glue/molasses sensation just off the straight-ahead that hardly inspires confidence.  But…. 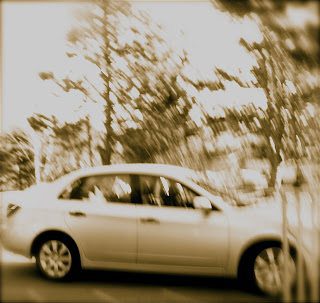 The A-pillar is narrowish, the driving position is low, and the pedals offer an oddly pleasing buzz. It seems as though a bit too much noise is squeaking in through the seals, too.  All these strange positives and negatives mix together to make a car that is greater than the sum of its parts (170bhp from a 2.5L flat-flour paired with a 4-speed auto that sends power to all four wheels).  On paper the Impreza doesn’t stand out from the pack.  On the dealer’s lot, this Subaru will not draw the eye in a Civic-like fashion.  In a comparison test, the bad NVH would come back to haunt the Impreza when competitors include the Toyota Corolla.
Yet during a solitary, short drive, the Impreza imprezas… er, impresses.  Despite what is very likely a truly viable vehicle for the long-term, the interior of the Impreza wouldn’t lead you to believe such a fact.  Worse than that, the Subie is seriously expensive when contrasted with its peers, whoever they are.  And, there are other “better” cars available.  That’s the story of 2008: so many decent cars to be had, only some can be officially labelled “good”.
See all Subaru-related posts at GoodCarBadCar
In Canada, the Impreza’s base MSRP is a few thousand cheaper than that of the Accord and Camry duo, but a few grand more expensive than the Civic and Corolla tandem.  Sure, the Impreza comes standard with all-wheel drive, a feature not even available in that other Japanese quartet, but one must still wonder; who is supposed to buy an Impreza?  Potentially Volkswagen Rabbit cross-shoppers. That’s another very unique vehicle that many people are forced to forget because of its comparably high price or small size.
The story is similar in the USofA, except the price gaps narrow between the midsizers and compacts to the point that the Subaru and the less expensive Rabbit are not quite so terribly stuck out in the middle of nowhere.  Does being free from direct competition ever help?  Of course it does; especially when you’re first into a segment.  The Subaru is just another anodyne appliance, one of many available on American roads today.  Its problem is much bigger than being simply an innocous appliance – it is that Subaru has placed this somewhat dull, 4×4, boxer-engined sedan in a wilderness all its own.
For the Subaru, or specifically Subaru Impreza faithful, the Impreza remains faithful.  It just does so with a little less uniqueness, a little less fun, and a little more maturity.  If you’ve grown up, consider yourself lucky: the Impreza has as well.  If you’ve grown up but want to think you’re young, the Impreza will surprise you – it’s really just an overpriced, dowdy-looking Corolla competitor with an extra dose of fun-to-drive.