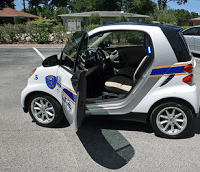 The Belle Isle police force in Florida has numbered one of their cars with a factor they’ve never used before: .5 will be used since, as the chief says, it’s “not quite a full-sized car”. Quite so, Chief Tegg. Quite so.

Belle Isle won’t be the first to use a smart fortwo as a police vehicle; but they’re drawing plenty of attention anyway. Trimmed in the department’s blue and gold, the white and silver smart fortwo won’t exactly be used in crime fighting. Where would the perps go?
Check out all Police-related posts from GoodCarBadCar.net here
Don’t be surprised when your car is parked next to a fire hydrant if the BIPD uses their fortwo cruiser to tuck in behind while an officer rights you a ticket. In PR guise, the fortwo should achieve close to double the fuel efficiency of the regular Ford Crown Victoria cruisers. Roger. Ten-four, point five.
(Photo from the Orlando Sentinel)