Negativity towards the Sky has already been revealed by The Good Car Guy on video. There’s more to the Sky than its shaking hood and inner door panel; more even than its vibrating rearview mirror and never-still steering rack. Plenty more.

Positive fact numero uno: it’s fast. The turbocharged Saturn Sky that I drove uses 260 horsepower and 260 lb-ft of torque to set its 3,036 pounds into motion. Oh, but wait – here’s another negative fact. Three thousand and thirty-six pounds? Fortunately that’s just a miniscule weight gain over the standard, non-Red Line Sky in a world where the performance version tends to weigh more than 71 pounds extra. But…. I gotta mention it, Mazda’s dominant MX-5 Miata weighs a fair 500 pounds less.

Horses need to be given a run, ya know. Especially when 260 reside in the stable. Tension is building; the legs need stretching; they need to see the great outdoors. Saturn says that, from rest, you can hit 60mph in 5.5 seconds. I believe them. Turbo lag is rarely felt and is never intrusive. Torque seems to be available anywhere and everywhere. In-gear acceleration is phenomenal.

Shifter and steering effort is nice. I’m driving a driver’s car, so let me drive it, I say. And the Saturn does. The Sky also expects you to hold down the hood, rest your left elbow in a position that will silence the door panel and forget the windshield mounted rearview mirror. While shifting the snickety-snick 5-speed manual and careening ’round corner after corner at the Milford Proving Grounds. General Motors hosted a group of web-savvy car folks at Milford and supplied a large grouping of Sky’s and the Pontiac version named Solstice. I drove only one of these rear-wheel drive roadster, so I’m not qualified to say that all would suffer from the shakes.

Perhaps the Sky tries to do too much. And in so doing, becomes too little; less than the sum of its parts. This Saturn grips corners tightly, but doesn’t feel at home on the corner or on a straight stretch. Any stretch of road ripples or bumps reveals a chassis unwilling to cooperate with real life; yet, what’s worse, the roof is too challenging to operate and luggage capacity is severely lacking.

In the United States, pricing for the Sky begins at $25,595 for 173-bhp and a less aggressive suspension. Pay $30,000 and you’ll get that turbocharged engine you want with a little room for an upgraded stereo.

Or sacrifice 94 horsepower, gain a retractable hard-top and a more mature driving experience for as little as $25,035. That’s called a Mazda MX-5 Miata PRHT. My advice would lead you to this paragraph.

Or, if you prefer the look of a Solstice, take a trip to your Pontiac dealership and save a couple grand. Before you follow the link, check your volume. Especially if you’re at work. 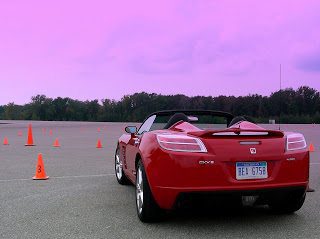 Indications were that an official ‘positive fact numero dos’ would appear at some point: the Sky is the best-looking of this bunch. Handsome, classy, clean, but full of visual impact from any angle. It was General Motors’ own styling boss who first suggested that people will buy a car for the way it looks. Saturn’s roadster proves Harley Earl right.