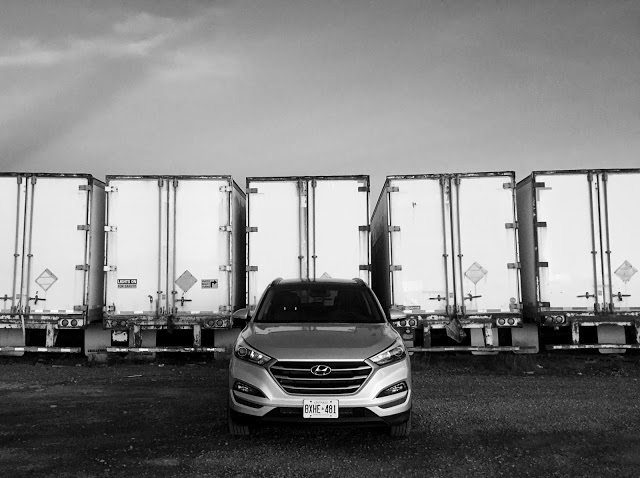 2016 Hyundai Tucson 2.0L Luxury AWD – More Than Satisfactory For The Majority Of Buyers Most Of The Time

Hyundai brought its first Tucson to market in 2004 and, from the start, generated an impressive degree of popularity with the company’s smallest utility vehicle.

The second-generation Tucson began its tenure in model year 2010, and while that new Tucson was a strong move forward for the nameplate, there were too many cute-ute overtones and not quite enough maturity.

There were value questions, as well, not because the Tucson wasn’t over-equipped in grand Hyundai fashion – it was – but because the small Tucson’s price point rubbed up against the much more family-friendly Hyundai Santa Fe Sport.

For 2016, the third-generation Hyundai Tucson is all grown up. More space, more content, more style, and most of all, more refinement. The larger Santa Fe Sport is ever-present, luring potential Tucson buyers slightly upmarket, but the Tucson now has the ability to stand on merit, not just on an overly generous Hyundai financing arrangement. 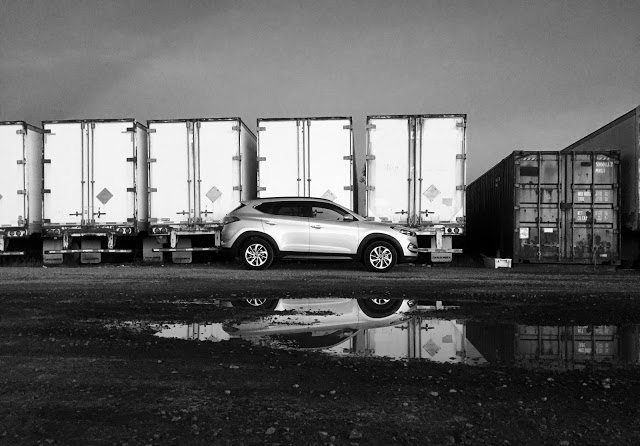 Similarly, Tucson pricing spans a broad range, stretching from a subcompact CUV-fighting $26,194 front-wheel-drive entry point to the loaded $41,394 1.6T Ultimate AWD. The Tucson doesn’t offer the optional power of many direct rivals – Ford builds a 231-horsepower Escape with 270 lb-ft of torque – but the Tucson majors on supplying an abundant amount of equipment.

Tucsons with the optional 1.6L turbocharged four-cylinder produce only 11 more horsepower but a meaningful 44 lb-ft of extra torque, all 195 lb-ft of which plateaus between 1500 and 4500 rpm. All-wheel-drive is a $2300 option on the 2.0L Premium FWD, standard on every higher-level Tucson, unavailable in base trim.

But if the Hyundai is at a dimensional disadvantage in comparison with the CR-V, it doesn’t show up in terms of outright passenger volume, where the CR-V – admittedly with slightly greater rear leg room – possesses slightly less occupant space. On the other hand, the CR-V’s cargo area is 14% larger than the Tucson’s, while the Tucson’s is 34% larger than the HR-V’s.

The third-generation 2016 Hyundai Tucson is small. But not too small. 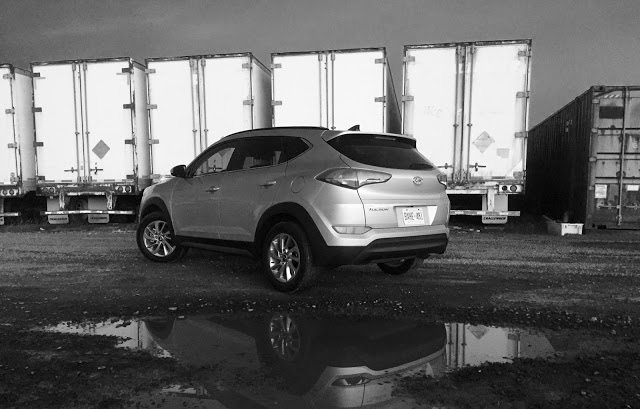 DOES IT WORK?
You wouldn’t expect to find luxury-like material strewn about the interior of a compact SUV, and you won’t find such quality in the Tucson. But you wouldn’t expect luxury-like levels of equipment, either, and you do find such a level of equipment inside the Hyundai at $35,000. There’s space for rear passengers to sit comfortably even behind lankier drivers, five would fit in a pinch, and the cargo area is 20% larger than it was in the last model, a key factor for young families with strollers and dogs.

Road and wind noise are all but absent. Of all its interior characteristics, the 2016 Tucson is most notable for its hushed cabin, notable for any vehicle of any type at this price point.

As a driver’s device, the Tucson earns few plaudits but incites little criticism. At the centre of the equation, the 2.0L four-cylinder’s low power output makes the Tucson only just quick enough, and it gets very buzzy at. If this became my personal vehicle, I’d forever wish I had the 1.6L turbo’s extra torque. The Tucson’s 6-speed automatic, as opposed to the presumably quicker shifting 7-speed dual-clutch married to the 1.6T, is never flustered but tends to hang on to gears too long in order to smooth out shifts. There’s nothing offensive here, but the powertrain is the weak link in 2.0L Tucsons.

The 17-inch wheels fitted to every 2.0L Tucson are especially lacking aggression, too. The 1.6T wears 19s, which aren’t just more stylish but also feature wider rubber with a lower profile. Though of little consequence to the typical Tucson buyer who inevitably places greater emphasis on ride quality, not sticky cornering grip, all Tucsons would benefit from a sporting edge to further differentiate this smaller Hyundai CUV from the Santa Fe Sport.

There is, however, a pleasing sensation of smallness when piloting the Tucson through urban settings. The steering is nicely weighted, and the Tucson squirts easily through gaps with a nimble quality missing from some of its lengthier, heavier rivals.

IS ANYONE BUYING IT?
In the 2014 calendar year, Canadian Tucson sales grew by less than 2% to 11,856 units, good enough for 16th place among SUVs and crossovers. Yet through the first nine months of 2015, as Hyundai is helped along by the clear-out of remaining second-gen Tucsons and the arrival of the third-gen Tucson, the Tucson ranks 12th among SUVs and crossovers thanks to a 28% year-over-year increase. Hyundai Canada has already sold more Tucsons in 2015’s first three quarters than in all of 2014. Third-quarter volume jumped 56%.

South of the border, Tucson sales are booming, as well. In August and September, U.S. Tucson volume jumped 26% and 121%, respectively. September’s 7925 sales made the Tucson America’s 21st-best-selling SUV/crossover, up 16 positions from September 2014.

SHOULD I BUY SOMETHING ELSE INSTEAD?
The number of options is seemingly limitless, but two prime candidates stand out. Hyundai’s own Santa Fe Sport is an older design, but it’s a hugely popular vehicle in Canada because it offers midsize space and a mature on-road presence for compact money. For only $900 more than this Tucson, you could have a Hyundai Santa Fe Sport 2.0T Premium AWD.

Meanwhile, Hyundai’s partner brand, Kia, markets their version of the Tucson, featuring completely different designs inside and out, with an available 260-horsepower 2.0L turbo. The Kia Sportage is updated for an early MY2017 launch.

In other words, the Tucson is more than capable of proving its worth, but there are a number of other vehicles you really ought to look at before signing on the Tucson’s dotted line. 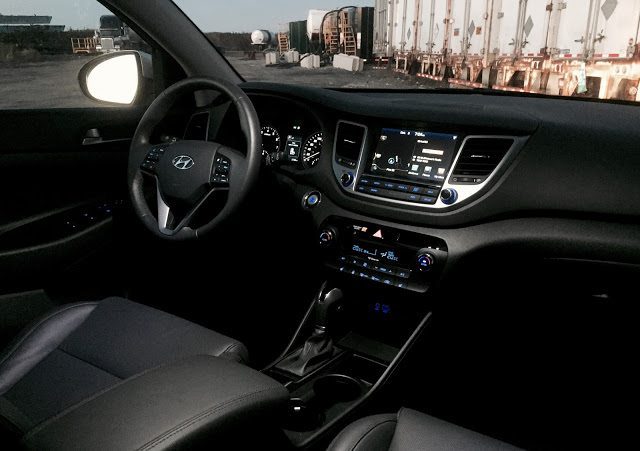 HOW MUCH SHOULD I PAY?
The 2.0L/6-speed automatic combination in our test vehicle isn’t among the most modern powertrains available, as we’ve noted. Thus, the least costly Tucson that I’d be interested in would be the 1.6T Premium AWD at $33,094.

That’s a steep $2300 premium over the 2.0L Premium AWD, but along with the superior engine, your $2300 also nets you four larger contact patches and, therefore, greater roadholding.

Yet while displaying to most consumers a sufficiently attractive proposition in the form of a new Tucson, Hyundai still causes me to question why many buyers wouldn’t spend a few dollars more each month on the Santa Fe Sport, which sits even more directly in the meat of the market.

For most new car buyers, the Tucson would meet their every need. For thousands of others, it will be virtually everything they want. Yet each and every month, more Canadians steer themselves toward the Santa Fe Sport rather than the Tucson, not on the basis of the Tucson’s deficiencies, but the Santa Fe Sport’s superiority in most categories.

Timothy Cain is the founder of GoodCarBadCar.net, which obsesses over the free and frequent publication of U.S. and Canadian auto sales figures. Follow on Twitter @goodcarbadcar and on Facebook. The Tucson was supplied by Hyundai Canada’s press office.