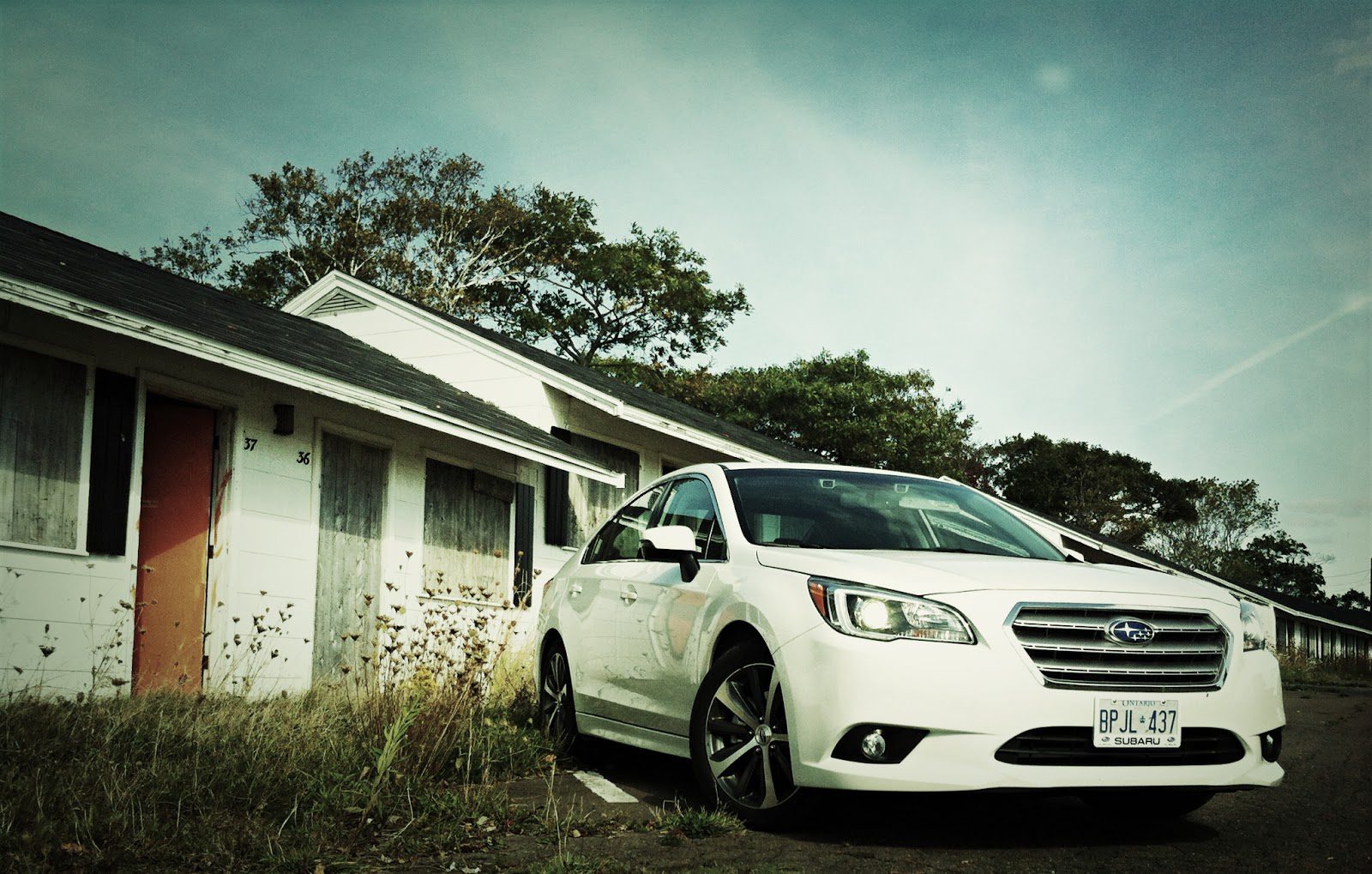 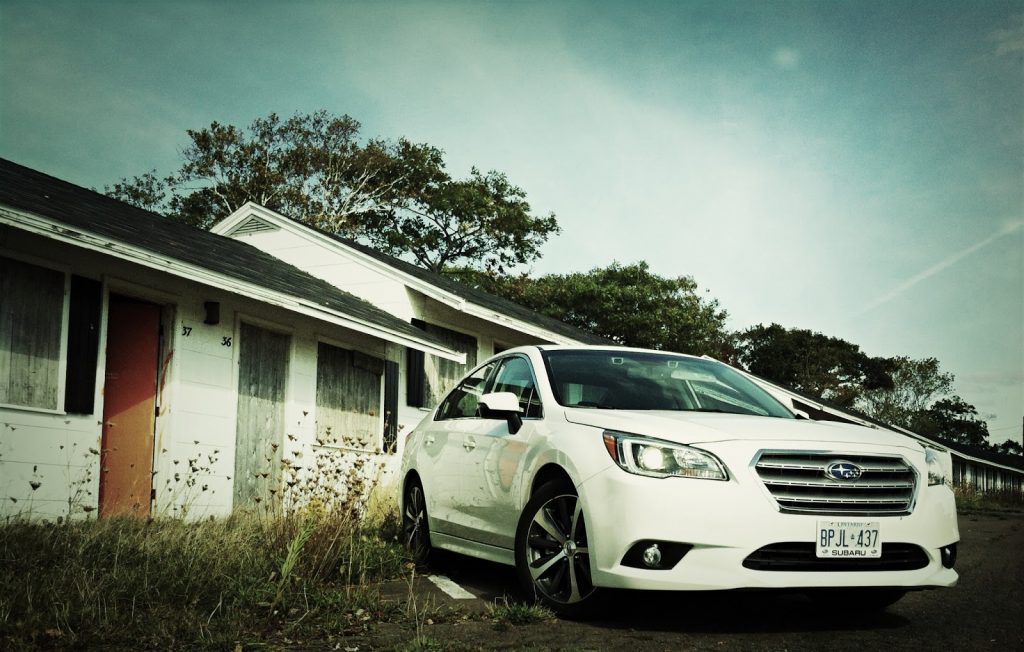 In 2014, upgrading from the four to the six means an increase from sufficient power to over-the-top acceleration.

The newer Accord – which just recorded record-high monthly U.S. sales – is two inches longer, its cabin is only slightly larger, and its trunk is 12% more capacious. It’s absolutely fine, completely capable, and as quick as the old V6, if not quicker. Or, if you want to accelerate like an 80s (or 90s?) supercar, you buy the V6.

There’s much more to the new Subaru Legacy than an engine. It’s the only car in the class that comes equipped exclusively with all-wheel-drive. Its cabin is truly vast. The trunk, while shallow, is deep and wide and squared off. Interior quality is a couple of generations ahead of the last car. Road and wind noise have been kept to a minimum, and ride quality is really rather impressive. 576 watts and 12 speakers of Harman Kardon audio provides a positive acoustic experience. The steering and handling lack the edge of third and fourth-generation Legacy 2.5 GTs, body roll being the biggest complaint, but the steering is more natural and weightier than what you’ll find in many intermediate cars, and there’s no secondary jostling of occupants as the car recovers from severe road imperfections. 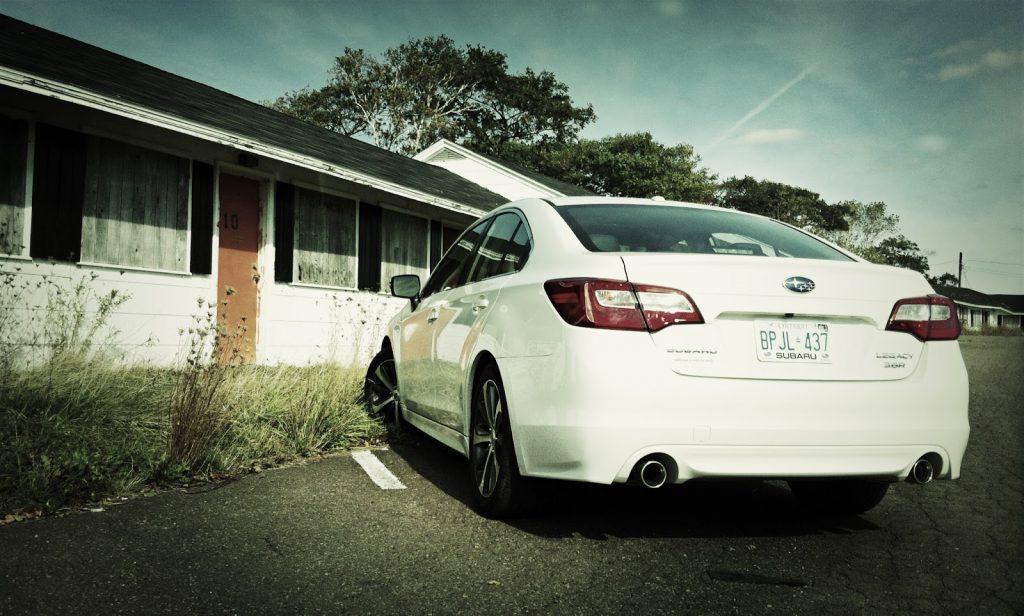 Driver comfort is enhanced by terrific visibility, and while my lanky frame never felt low enough in the car, there is a sensation of abundant up-front space that’s in keeping with contemporary “mid”-size cars, which easy fill a garage. The extensive list of active safety features (ADC, PCB, PCTM, VLDSW, BSD, LCA, RCTA) on this top-trim Legacy Limited work unobtrusively, unlike the Jeep Cherokee which brings you harshly to an unnecessary halt when reversing, for example.

But in an era which supplies us with perfectly conventional family sedans that tempt consumers to switch out the capable four-cylinder engine for a high-performance V6  – America’s three favourite midsize sedans still offer remarkably quick V6 powerplants – the Legacy’s 3.6L horizontally-opposed six-cylinder reeks of insignificant extravagance. Subaru Canada offers the 3.6L on Touring, Limited, and Limited Tech models and asks for at least an extra $3000 to take the plunge. 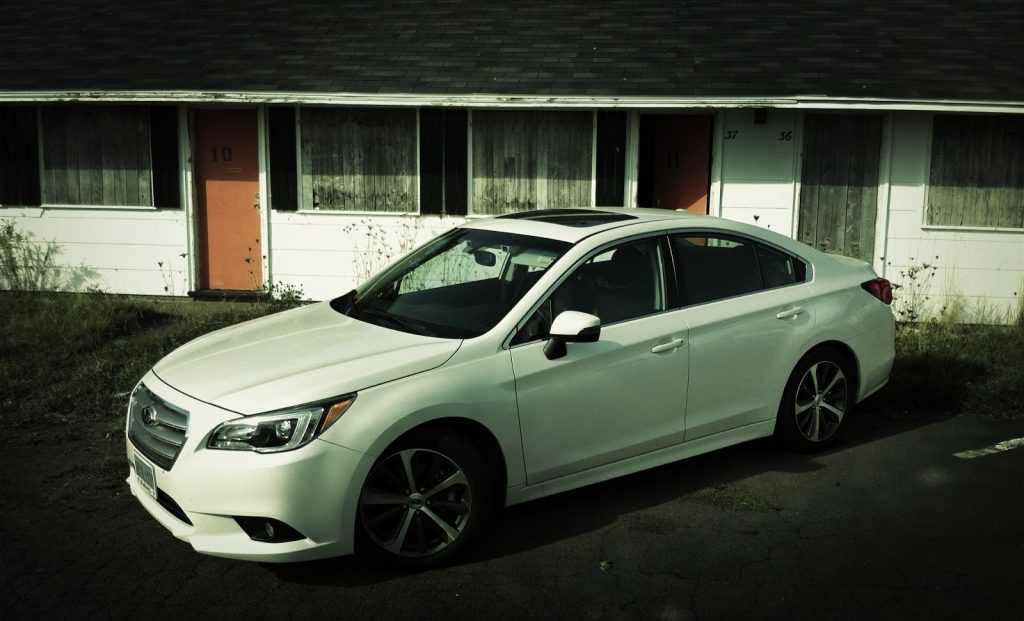 The six-cylinder’s fuel economy ratings are better than the all-wheel-drive V6-engined Chrysler 200’s; not as good as the 2.0L EcoBoost AWD Ford Fusion’s. Granted, in that Fusion, we saw 12.8 L/100km. An Accord V6, lacking all-wheel-drive of course, is rated at 11.0 and 6.8 L/100km in city/highway driving.

The Subaru’s six-cylinder fuel economy is a highlighted issue because it’s yet another penalty you pay, in addition to the higher transaction price, for an insufficient amount of heavy throttle fun. By modern standards, the Legacy 3.6R doesn’t feel like a genuinely quick car, because it’s not a genuinely quick car. Four-cylinder power in a Mazda 6, for instance, will get you away from stoplights more quickly. Indeed, the last Legacy 3.6 accelerates more rapidly.

The Subaru is heavier than it used to be, and that’s an undeniable part of the problem, but that weight pays dividends in a structure that feels very solid and a cabin that’s nicely hushed. Indeed, the 3.6L isn’t overwhelming even on paper: with just 256 horsepower, it does not rank among the elite. No, the bigger issue isn’t the Legacy’s overall heft and dearth of impressive specs but rather the connecting element between the engine and the wheels: this is the kind of CVT that gives CVTs a bad name.

Certain that added power cures all CVT ills, I was pleased to discover that the CVT in the latest Outback 2.5i we tested a few weeks ago was mostly inoffensive. Yes, sometimes it made unpleasant sounds. (This 3.6 makes a great noise but its orchestral talents are thrown out of tune by the conductor, the CVT.) But the 2.5’s delivery of power was not hindered by its gearlessness. Knowing this, I assumed that an additional 81 horsepower would only smooth out the CVTness.

Perhaps Subaru made similar assumptions and therefore did not take the time to properly calibrate the pairing, as the dearth of initial acceleration from rest is a miserable disappointment. The paddle shifters offer real assistance, but the frustration of being in a six-cylinder midsize car that simply doesn’t feel like a substantial upgrade over the four is not going to be alleviated by operating the paddles on a constant basis. (A six-speed manual is not available with either of the Legacy’s two engines in the United States; Canadian buyers can select a three-pedal layout with the 2.5L engine.)

Fortunately, these disappointing realizations serve to highlight the gains made by more basic Legacys in the Subaru’s latest revamp. The new infotainment interface is quick and uncomplicated; only a long reach to the tuning knob and excessive glare on the screen itself let down an otherwise straightforward centre stack.

The outgoing Legacy I drove around last winter was hugely uncompetitive. With all-wheel-drive included in the price and inoffensive styling, perhaps even a handsome front end, the new 2015 Legacy is just as staunchly Subaru as it’s always been, if less athletic, but it now feels as well-built as the category’s top sellers. 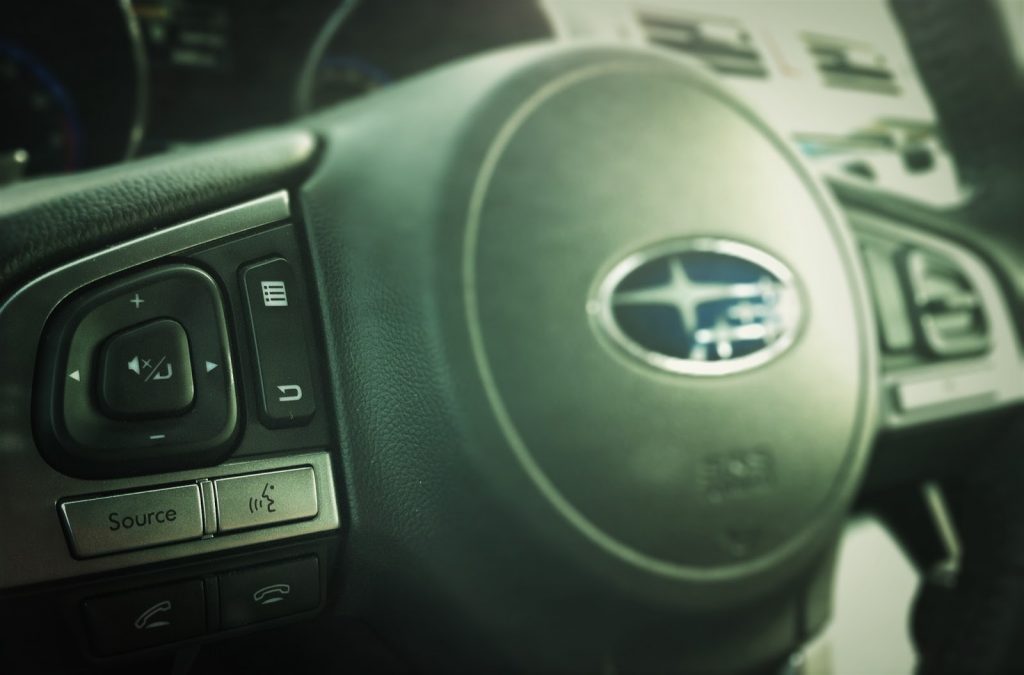 North America’s new vehicle market has developed a large appetite for cars and crossovers with four driven wheels. Yet the major midsize players from Toyota, Honda, Nissan, Hyundai, Kia, and Volkswagen have either never entered the all-wheel-drive fray or have forsaken the notion.

Massive leaps in refinement have created an opportunity for the 2015 Subaru Legacy to capitalize on its unconventional layout. The fact that the underperforming CVT-laden six-cylinder option is a terrible value is truly of little consequence on that front. A dollar-minded sedan buyer with a yearning for all-wheel-drive, decent fuel efficiency, and space for four already knows he’s better served by the base engine. Alas, historically speaking, not many of those buyers have actually existed.