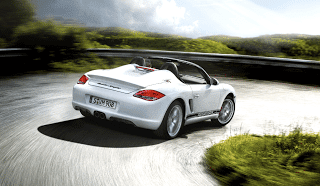 Delete the air-conditioning, cupholders, and stereo system from a regular Porsche Boxster S, an already high-performing roadster. Enforce a scrupulous inventory of the weight of a few other key Boxster items, even the soft top. Curb weight drops by nearly 200 pounds. Now bump up the power of the 3.4L horizontally-opposed six cylinder.

Easily, the Porsche Boxster Spyder becomes one of, if not the most accomplished mid-engine sports car in the world. Ah, but there’s more, so much more. Finally the Boxster becomes the good-looking roadster it always should have been. The rear deck features a curvaceous double-bubble design. This small change, which includes a well-hung CHMSL, works wonders on the fairly plain design of the regular Boxster. Even the Boxster Spyder’s decals add to the presentation.
The debut of the Porsche Boxster Spyder eliminates the regular Boxster and Boxster S from The Good 12 party after obvious inductions in the two years prior to v3.0. Although priced above the Boxster S, the Boxster Spyder proves the merit of the “less is more” philosophy which is at the core of Porsche’s existence.
—–
Engines: 320 horsepower; 273 lb-ft of torque from a 3.4L boxer-six
Base USD Price: $61,200
City Mileage: 19 mpg (est.)
AMG, M & RS: In the Boxster S, Porsche already produced a formidable competitor for the high-strung roadsters from BMW’s M division, the AMG outpost of Mercedes-Benz, and the new Audi TT RS. It’s now highly unlikely that any of the Porsche Boxster’s rivals could handle the Spyder on track. And aesthetically, the Boxster Spyder’s alterations make the Porsche fit for visual perusal when parked beside the Audi TT and BMW Z4.
CLICK HERE FOR THE GOOD 12 v3.0 PART VIII
CLICK HERE FOR THE GOOD 12 v3.0 PART X