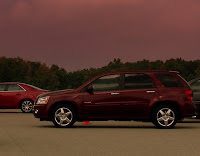 There’s plans to inform The Good Car Nation of all Milford Proving Ground activities, but don’t we all love to read a good test drive? Isn’t that what automotive media really centres on? ‘Where the tire hits the road’ ought to be especially applicable to people who care about the tire and the road, no?

This story from early August reveals my true feelings towards the purpose and necessity of a vehicle like the Pontiac Torrent GXP. I see numerous points anybody could put forth to show that the Pontiac Torrent GXP (a high-powered small utility attempting to be an inexpensive BMW X3) doesn’t need to exist. Nobody needs this kind of performance in a vehicle that fails to live up to the standards we set for ‘feel’ and refinement. I’d love to see an interior that beckoned me with quality and materials, for instance. Plus, I think it would be great to see a Pontiac crossover that wasn’t available at the Chevrolet dealership.

However, there is praise to be showered upon the Torrent GXP. When I first set foot outside the luncheon area at General Motors Milford Proving Ground and walked around the vehicles to see which I needed to drive; wanted to drive; and felt responsible to drive, the Pontiac’s Torrent GXP stuck out as a vehicle I should drive based on the responsibility I have to the Good Car Nation. Well, Nation – awaken. The Torrent GXP is ready for takeoff. 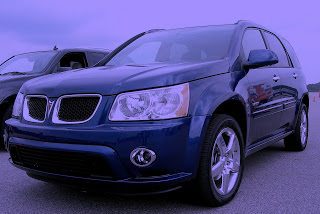 For somewhere between $26-28,000 USD, you can have a GM-built SUV with 264 horsepower. And this ain’t 264 horsepower from a piece of unfortunate mess of thrashing metal. Old-tech is not found under this hood. Along with the gains under the hood (79 bhp up from the base Torrent), you can also count on an extra gear in the automatic tranny. Steering switches from electric to hydraulic assist. (Take that as a positive sign for GM’s future performance vehicles.) Equip with bigger wheels and a true sports suspension and you’ve got yourself a GXP.

While maintaining a civil ride, the GXP is tied to the tarmac in a way that BMW consumers would enjoy. I’m serious. Reasons to avoid the purchase of a Torrent GXP can’t include ‘poor driving dynamics’. Direct and weighty steering – admittedly feelless – is just the start. Body roll is not nearly as prevalent in the GXP as it was in, say, the new Saturn Vue. (Build an SUV with the Vue V6 AWD’s look and overall feel & refinement & interior with the Torrent GXP’s dynamics and you’ve got yourself a great vehicle.) Problems only arose when cornering quickly on rippled roads. Seriously bumpy, screwed-up, rippled roads. Out of ten vehicles driven on this 5-mile trek, maybe two were calm through that section.

Possessing such levels of horsepower in a vehicle of this type and weight would commonly be useless and unadvisable in my mind. The GXP copes with the power admirably, mostly because it does more than simply power out of corners. It copes with the twists, too. I had the benefit on this first trip around our section of Milford to have a GM engineer alongside directing me. Like the rest of my 46.5 hour Milford trip, he was free of charge.

Even so, the parenthetical sentence two paragraphs above regarding the Vue/Torrent combo all too often replicates the typical GM story. We’ll see if the other nine vehicles you’ll read about here can sing a different song.