Tuning into any automotive website, mainstream or otherwise, only to find out they stand firmly against a specific genre of vehicle, is a true disappointment. If you want an honest representation, it’s hard to find that from a person or group

whose mind(s) are firmly closed.

The Good Car Guy, therefore, keeps an open mind. Search through more than 250 previous posts at GoodCarBadCar and you’ll find that a high percentage of articles are car-based. You’ll find truck stuff; yes. Sport-utilities are discussed on GCBC, too. A minivan or two may even garner mentions. Typically, though, cars dominate the talk. In fact, small cars generate genuine GCBC hype.

Thus, at General Motors’ Milford Proving Grounds, the vast array of sport-utility vehicles had no great effect on The Good Car Guy. Albeit, two of the previous Driven articles taken from Milford test drives dealt with crossover/sport-ute style vehicles. Of the eight remaining General Motors automobiles yet to be discussed, four would be classified by most folks as SUV’s and another is a truck. (That leaves a hybrid, a large sports sedan, and America’s sports car.)

So what does GoodCarBadCar do? The website built to dethrone the bad car, the boring car, and the frumpy car – in sight of tons (literally) of sport-ute metal and hardly an ounce of small car on Milford’s Black Lake – what are we to do? Well, test drive the sport-utes. Take’em on a lap of the same loop the Saturn Sky scoured. 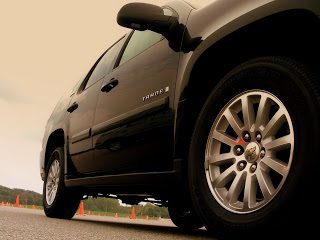 CHEVROLET TAHOE HYBRID: Basic Tahoe’s range in price from $35-$45,000, but you could watch the numbers quickly roll when options start flying. The hybrid version of Chevy’s venerable SUV hasn’t yet received pricing, but don’t expect it to be pushed too far upmarket. GM/Chevrolet has been pushing this vehicle way too hard to see it priced higher than consumers are willing to pay; and thereby reducing it to the status of “seen only on dealer lots”.

GoodCarBadCar loves driving impressions; not just market studies. This vehicle feels heavy. Of course, you say, it’s a massive truck-based sport-utility vehicle. I know that, too. GM’s large SUV’s have been renowned for shrinking around themselves for a couple of generations now; being far more able at performing that trick than Ford’s Expedition, or even the Sequoia and Armada from Toyota and Nissan. While that is still relatively true of regular members of this family like Tahoe/Suburban/Yukon/Escalade, this hybrid doesn’t pull off the stunt.

True enough, I’d driven some very capable handlers that day at Milford, and no SUV – certainly not a hybrid Tahoe – was going to perform at the level I desired. Nevertheless, I felt left out. I was a lonely driver piloting an eery, weary, not-so-cheery boat. Sure, the interior was somewhere near the top of any list entitled, “Best GM Interiors Ever”, and the fuel economy will be somewhat better than what you’d see in a regular Tahoe, but I regretted every hour GM spent engineering this vehicle. It will be years; maybe decades, before a monster SUV of this size performs adequately at the pump.

Attempting to market your greenness by hybridizing such a vehicle is a relative insult – this vehicle will cost a lot of money to buy and run. I saw mpg ratings on the onboard computer of 99mpg. The engine was off and I was, in fact, using no gasoline whatsoever. I frequently watched the numbers roll down to 7 mpg and struggled to find more than 13 or 17 mpg during normal cruising. A number of my colleagues were disgusted enough to absolutely discount the Tahoe model (unfairly) as a whole, just because the Hybrid seemed so silly.

Tahoe Hybrid’s do feature some aero and weight-loss tweaks. Hood and tailgate have switched materials to aluminum and you’d be pressed not to notice the large front air dam. It would be interesting for Chevrolet to perform highway fuel economy tests on a Tahoe with all non-engine related tweaks, then compare them to a vehicle without those adjustments but with the hybrid drivetrain.

Weight loss and aero work would do wonders for large SUV’s. Becuase the core of the Tahoe is heavy, a chain reaction begins. Suspension parts are built stronger. Stronger = heavier. The engine must b

e larger to maintain modern levels of forward propulsion. Larger = heavier. The wheels, tires, brakes…. everything, must be built in accordance with a genuinely heavy vehicle. Subtract weight, whether through the use of added aluminum or a shorter features list, and this vehicle wouldn’t need a huge battery to strengthen its greenness.

The Chevrolet Tahoe Hybrid is a really nice vehicle. It just happens to feel like a dead weight. Slow, cumbersome, and lifeless. I appreciate GM’s efforts to supply me with a trip, a room, food, and plenty of vehicles. But I wish I’d spent more time in vehicles like you’ll see in Part II of Milford’s SUV quartet.