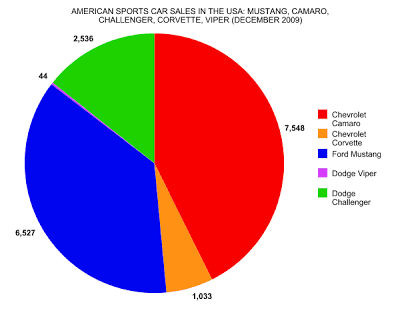 Home
All Vehicle Rankings
Sporty Car Sales
Muscle Car Sales
Last winter the Chevrolet Camaro made an appearance on CNN and other news outlets while broadcasters suggested that this car, the Camaro, was GM’s great hope for the future.
What were they smoking? No niche product of the Chevrolet Camaro’s nature is ever going to rescue a gigantic conglomerate like General Motors. True, were the Camaro a Jaguar, for instance, the company’s annual sales would jump through the roof. But for GM, Camaro sales are a drop – a very nice and colourful drop – in a huge global reservoir. With 7,548 units sold in the USA last month, the Camaro once again handed the Ford Mustang its lunch, telling ‘Stangs to sit at another table in the cafeteria of Sales Stats. But was the Chevrolet Camaro on sale for a large enough chunk of 2009 to wrest the Mustang’s muscle car sales crown from Ford’s grasp? Take a look at the Graph below for a closer look at December before turning over to the 2009 Year End sales figures. November’s Graph is here.