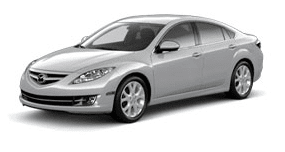 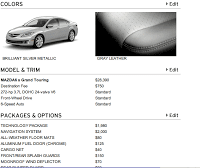 Brilliant Silver Metallic paint isn’t so brilliant after all. Actually, it’s the only thing you can do to your Mazda 6 to make it seem familiar to Toyota Camry owners – other than jamming the 6‘s floormat underneath the accelerator. If your misguided goal is to turn your Good 12-winning Mazda 6 into a BMW 3-Series fighter, something it’ll never truly be, then you can add the $1,980 technology package, $2,000 worth of navigation, and other options valued at an extra $1,800. Since you chose the Mazda 6 s Grand Touring with its base price of $28,390, destination and options have taken your sticker northward in a harsh manner.

CLICK HERE FOR THE KIA SOUL GONE BAD
How far has the MSRP climbed? First, let’s point out that a loaded V6 Mazda 6 is a pretty nice car, indeed. The Good Car Guy’s honoured the 6 range the last two years because of its fun-to-drive nature, handsome sheetmetal, and the level of interest it creates in a class full of dullness. However, a fully-loaded Mazda 6 at $34,920 receives a penalty for encroachment. The Infiniti G37 is more than $1,000 cheaper. For $31,450, an Audi A4 is an awfully awesome car. Sure, those are base prices. But they’re also far more desirable cars.
CLICK HERE FOR THE HYUNDAI GENESIS 4.6 GONE BAD
Be careful what you take from this posting. He (or she) who purchases an impressively quick, handsome, completely optioned Mazda 6 isn’t getting a car which belongs in The Bad 8 v3.0. Rather, it’s the bad version of a very good car.