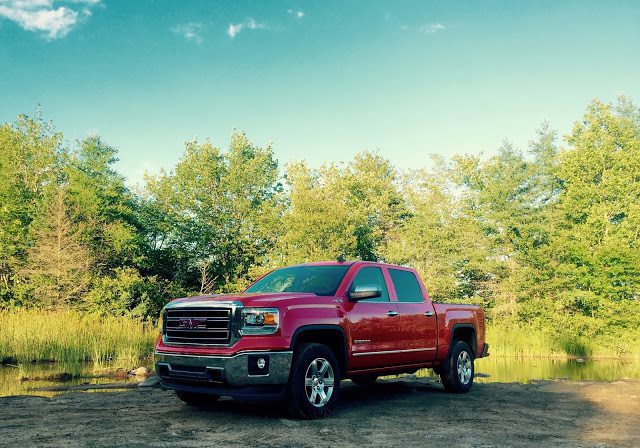 We last tested GM’s latest K2XX generation of pickup trucks in the fall of 2013. Our test truck was equipped with GM’s long-running 5.3L V8. We were, “surprised that 355 horsepower didn’t feel more impactful.”

We last experienced GM’s new 6.2L V8 seven months ago in the 2015 GMC Yukon Denali. That jumbo SUV registered 18.5 L/100km, less than 13 mpg on the U.S. scale, “a figure exacerbated by winter rolling stock, cold weather, excessive idling, and city driving.” It was also equipped with a 6-speed automatic.

Now, GM has paired the aforementioned truck with the aforementioned engine. Having already reviewed the truck, we’ll direct you back in time to get our full impressions. For the purposes of this story, we’re taking a closer look at the engine.

Is the 6.2L L86 EcoTec3 V8 worth it? Are the Sierra and its Chevrolet Silverado twin well suited to the 6.2? What are the 6.2’s downsides? What’s the fuel economy penalty? Are the alternatives superior? 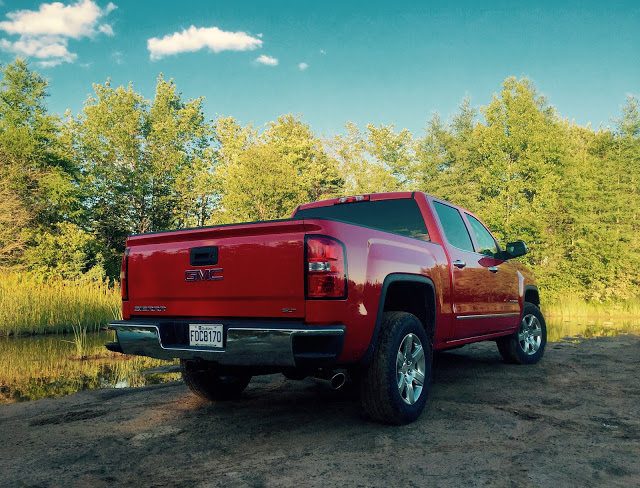 (You can’t select the 6.2L on regular cab Sierras. The 6.2L V8 is not available on double or crew cab models in base or SLE trims and it’s optional, not standard, on the Sierra Denali. At Chevrolet, the 6.2L is reserved for LTZ and High Country trims.)

$3.05 – In terms of maximum towing, the 6.2L’s ability to trailer 900 more pounds costs just $3.05 per additional pound. Trucks with that Max Trailering Package can also carry more weight in the bed, but the 6.2L can’t accept as much weight as the 5.3L. You’ve paid an extra $2745, but now the payload drops by 120 pounds because the truck itself has gained 118 pounds.

6.2L > 5.3L
$2745 extra for 65 extra horsepower, 77 extra lb-ft of torque, 8% more towing capacity, less payload capacity, and worse fuel economy? Hidden behind those figures is an engine which feels like it makes its torque at a more accessible point on the tachometer than the 5.3L; a V8 with more attitude and personality.

GM’s 5.3L works. It’s a smooth V8 that goes about its business unencumbered by fripperies, ignorant of branding and headlines and, to put it frankly, fun. The 5.3L is the penny-pinching accountant who works 8-4 and thinks an enjoyable evening is one spent in front of Friends reruns, chuckling at Chandler and Joey’s awkwardness. “Could that be any more stereotypical!”

The 6.2L doesn’t work, it lives. Constantly on the lookout for opportunities to get a little bit sideways, always mindful that an unoccupied off-ramp is as gratifying for a high-powered truck as an unoccupied airplane restroom is for a passenger who drank three cans of Sprite before nodding off for four hours.

It’s stupendously quick, the 6.2. In Car & Driver’s testing, a 5.3L V8 Crew Cab accelerated to 60 mph in 7.3 seconds. Perfectly acceptable. A slightly heavier Sierra Denali with the 6.2L did the deed in 5.4 seconds.

8-SPEED
“This outgoing 6-speed never shifts poorly, but it doesn’t manifest the intelligence of newer automatics.” So says our review of the Yukon Denali with a 6.2L and a 6-speed automatic. Although numerous 9-speed transmissions have failed to impress, from the Chrysler 200 to the Jeep Cherokee to the Acura TLX, the modern move toward 8-speed autos has been a revelation in many high-priced vehicles, including the Audi SQ5. 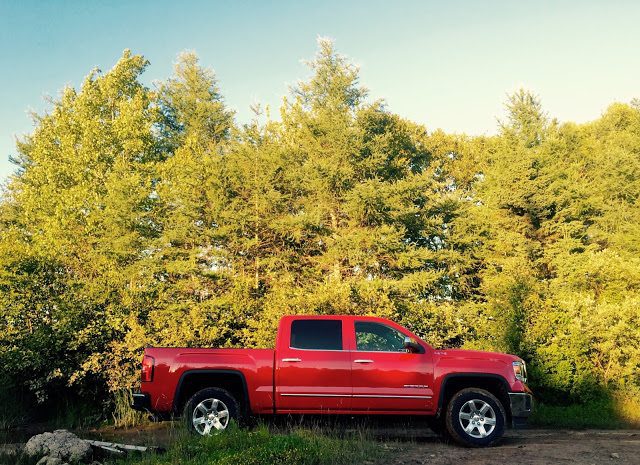 This 8-speed, however, is less refined than the ZF gearbox found in many premium cars. True, the majority of time in the Sierra is spent with the 8-speed masking its very presence, as the best non-sport-minded automatic transmissions should. There are moments, nevertheless, when GM’s 8-speed clunks into gear, flubs a shift, or finds itself confused as it hastily attempts to move forward to a more economical ratio just when you require a kickdown. It’s not bad. But in a world of awe-inspiring 8-speeds, it’s the least impressive of the lot.

GOOD & BAD
Aside from the transmission, which isn’t so poor that it becomes a deterrent, the 6.2L’s key demerit is a criticism so often levelled at GM’s 5.3L V8. The lazy throttle response almost seems like a deal breaker for some reviewers, and while I’d prefer a pedal which wasn’t so conscious of fuel economy; a throttle which didn’t try to convince me that the truck is actually slow, there are upsides to the overly recalcitrant throttle.

Reversing a 420-horsepower, 19-foot-long, six-and-a-half-foot-wide pickup truck into a sloped driveway which is already mostly filled by a Honda Odyssey isn’t a task which would be made any easier by a jumpy throttle. And though a truck this big is never going to be a rock crawler, a throttle pedal which doesn’t cause the vehicle to rocket from one groove to another makes moderate off-road adventures more pleasant.

Could GM recalibrate the throttle in their pickups to make the trucks feel less sleepy? Sure they could. But if they do, maintaining some of the progression would be nice. 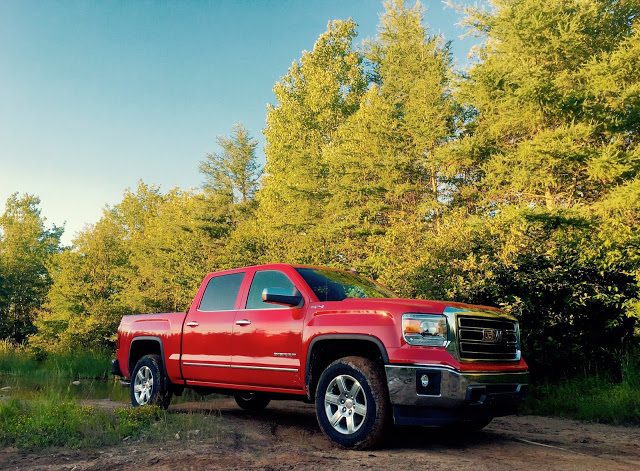 RIVALS
Currently, the mightiest powerplant in Ford’s F-150 lineup is the 3.5L EcoBoost which generates 365 horsepower and 420 lb-ft of torque. Yet EcoBoost torque feels even more plentiful, because it reaches that 420 lb-ft peak at just 2500 rpm, enabling your right foot to ride a wave throughout the rev range. Alas, the F-150 EcoBoost sounds like a vacuum. GM’s 6.2L sounds vaguely Corvette-like.

Ram’s 5.7L Hemi produces 395 horsepower at 5600 rpm and 410 lb-ft of torque at 3950. It’s the most obviously powerful engine in the bunch at first blush; somewhat raucous; keen to advertise its prodigious output. Of course, there’s even more torque available in another Ram 1500. The 3.0L diesel is down on peak power but generates 420 lb-ft of torque at a low 2000 rpm, perfect in a truck environment. The Ram 1500 EcoDiesel is rated at a low 8.8 L/100km in highway driving and should use only slightly more fuel in the city than this 6.2L GMC does on the highway.

REAL WORLD
In our experience, the 6.2L proved surprisingly efficient. Consuming regular fuel at a rate of 13.7 L/100km might not seem terribly impressive at first, but then one remembers the available power, the frequency with which we tapped the power, and the fact that we didn’t depart from an urban environment. The 2014 GMC Sierra 5.3L we tested nearly two years ago drank 7% less fuel but was blessed with abundant highway time and very little city driving.

If you’re trying to make the case for the 6.2L to your spouse or your business partner, perhaps the truck’s acceptable fuel consumption is just the way to make your argument.

If you’re trying to make the case for the 6.2L V8 to yourself, however, we all know you’re already imagining burnouts and stoplight drag races.

Let’s not kid around. Be up front. Look yourself in the mirror. If you want a big truck, you want the biggest, baddest V8 there is under the hood of that truck.

I can’t blame you.

Timothy Cain is the founder of GoodCarBadCar.net, which obsesses over the free and frequent publication of U.S. and Canadian auto sales figures. Follow on Twitter @goodcarbadcar and on Facebook. The Sierra was supplied by GM Canada’s press office.