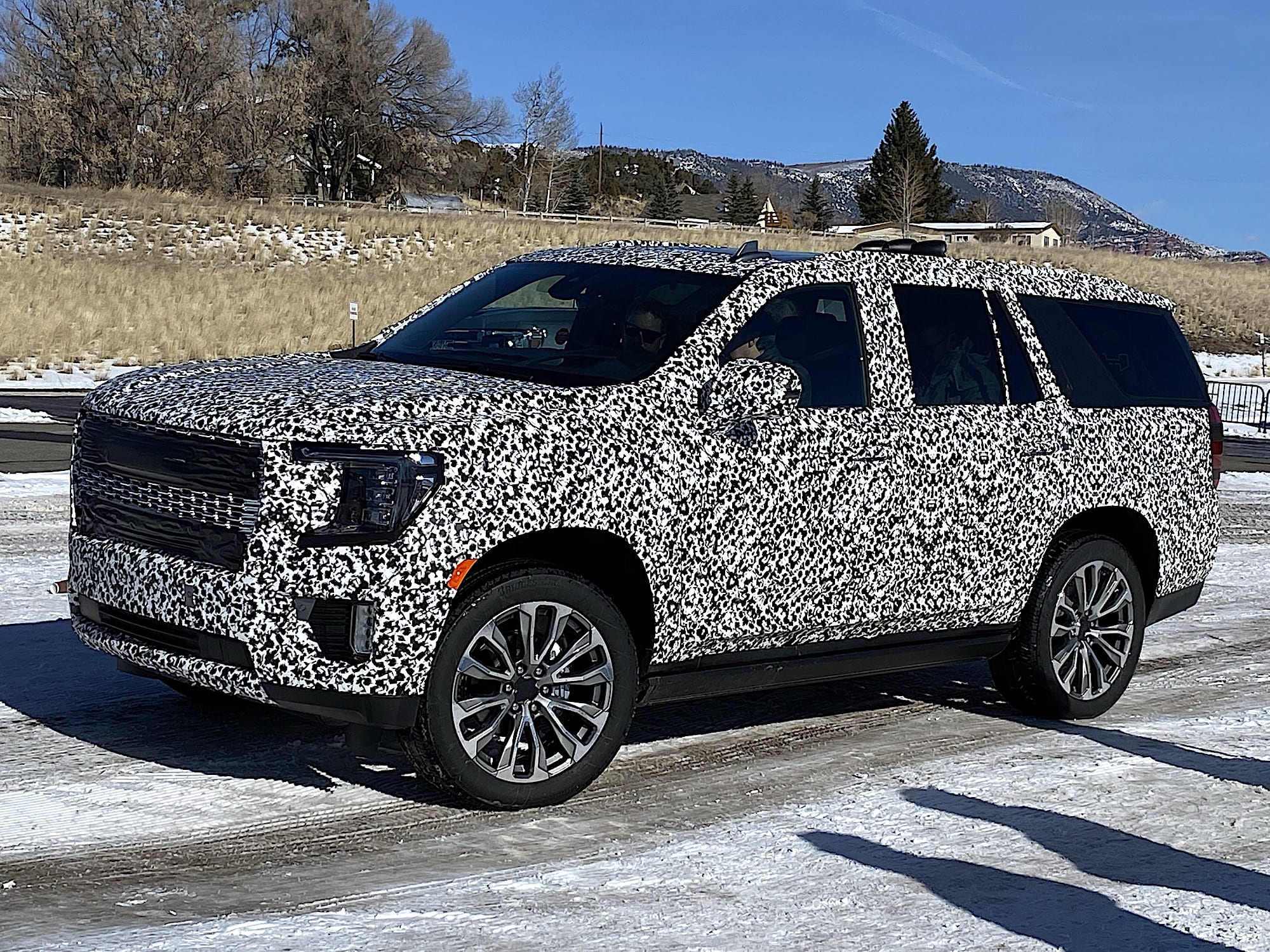 Spending Some Time With GMC

As I sit here on the plane after spending time with GMC for two days, I’m beginning to realize that future product reveals will likely be private events. Auto shows are becoming less and less relevant, and I could see more manufacturers turning to private events to reveal products.

GMC invited me out the Vail, Colorado, to drive the new 2021 Yukon. The company hadn’t officially revealed the large SUV yet, so I was pretty excited. What I didn’t realize was that the company had, in some ways, much more in store for me, and in others not nearly enough.

The drive day began with a shuttle bus ride out to where GMC had all of its goodies. The company brought along most of its lineup. They had Acadias there, Sierra pickups, Canyons, and of course the new Yukon.

The trucks were available for street drives and the Acadia they had on a small closed course. I’ve driven the Acadia as well as the full-size Sierra and the heavy-duty Sierra, so I passed on those opportunities to get in the new Yukon. 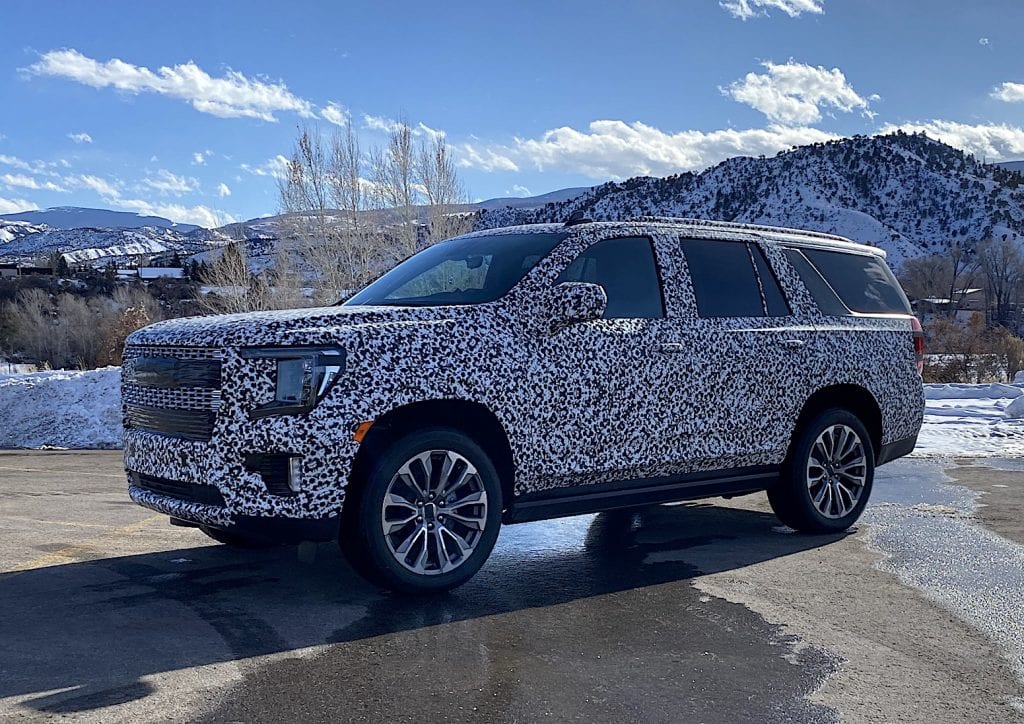 Let me be clear, GMC sent a vague email to get me out there with the promise of driving the Yukon. I did drive it, but not for very long at all. So I’ll tell you what I can from my limited experience.

The SUV was on a closed course that was designed to demonstrate the all-wheel-drive system, adaptive air suspension and adjustable ride height, hill start assist, and hill descent control.

It was just set up in a parking lot. GMC had some steel containers with ramps to show off the hill technology, and a makeshift tunnel to show off the new adaptive air suspension and how it can raise and lower the SUV. During my time in the vehicle, I experienced no issues with any of the technology, and I can see how it would be genuinely helpful in the right context.

It shows all signs of being an absolutely fantastic SUV, and it should put to shame most of the other vehicles in the segment as well as give the boys over at Ford some fear for their Expedition. The Expedition is selling quite well and has actually taken away some market share from GMC and Chevrolet. GMC wants to win that back and sees this Yukon as the way to do it. 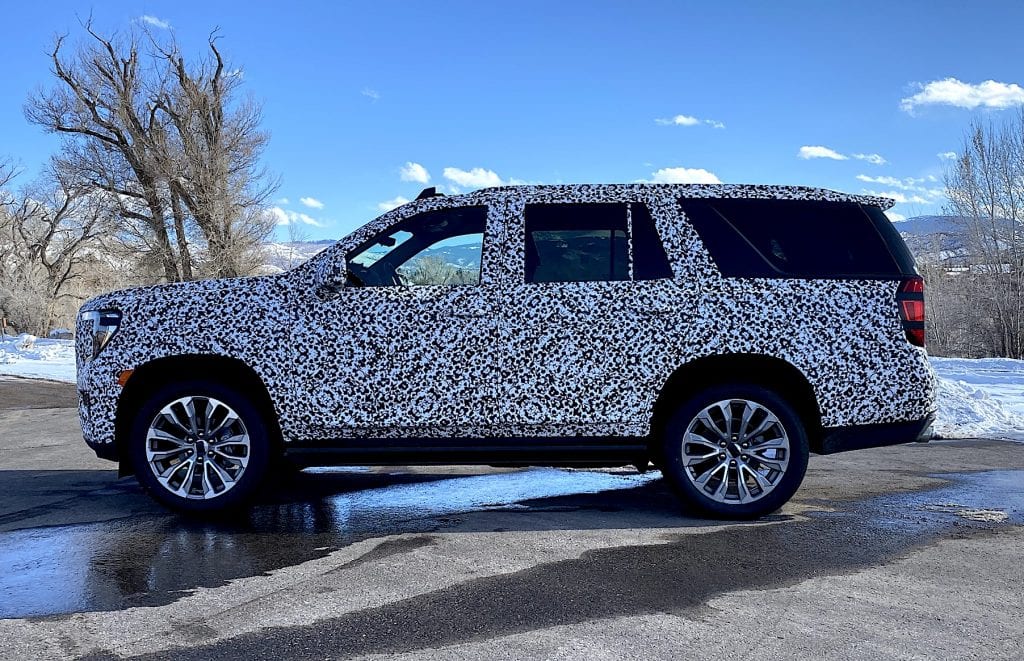 These vehicles were preproduction models and still had the camo wraps on them, as you can see from the pictures. They were not finished products and GMC did have to pull a vehicle at one point for an undisclosed reason.

The Yukon is offered in a standard model or in Yukon XL. The XL, if you didn’t know, is just a longer-wheelbase version of the same vehicle. It has more legroom and cargo space, which are important if you’re in the large SUV market.

GMC offers two different gasoline engines and one diesel option in the Yukon. All three of the engines are mated to a 10-speed automatic transmission.

There’s the 6.2-liter V8, a 5.3-liter V8, and a 3.0-liter Duramax turbodiesel engine. The big boy of the group delivers 420 horsepower and 460 lb-ft of torque, which is class-leading. I didn’t have a chance to really experience what these engines can do. The test I was able to conduct were all low-speed driving. 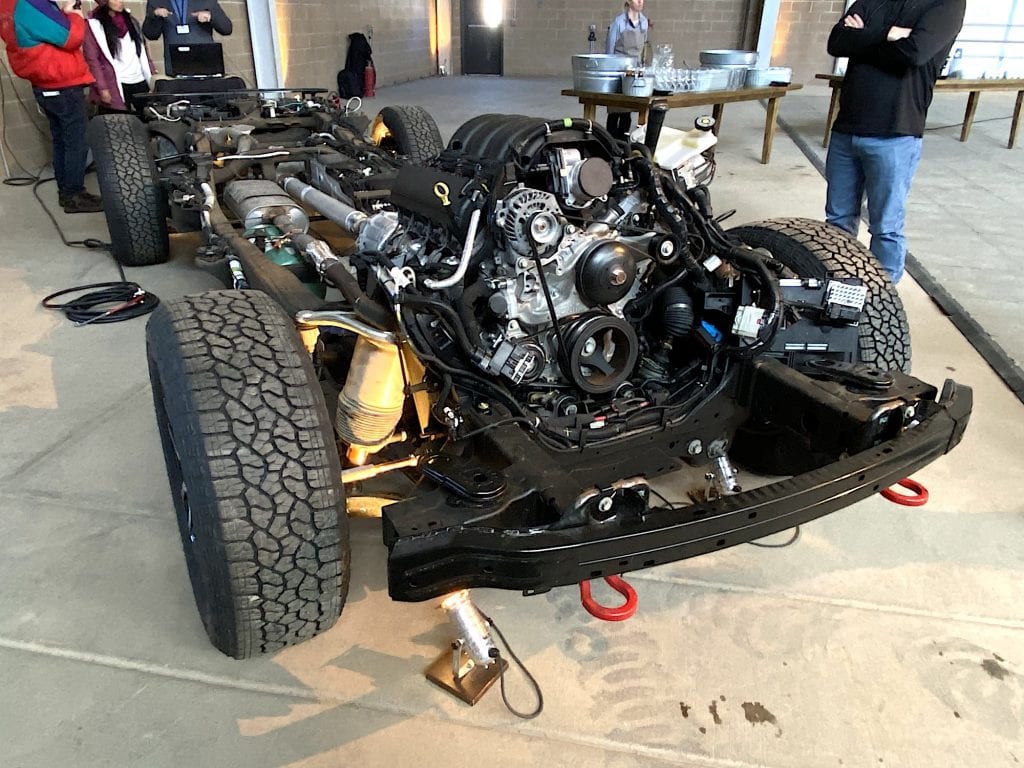 Those engine and transmission combos then send power to the rear or all four wheels. The new Active Response 4WD System combines typical four-wheel drive modes with an electronic limited-slip differential to help get the power down where you need it.

As I said, I had very little time to play with this. I was honestly very disappointed GMC didn’t let us take these vehicles out on the road, or better yet do the actual reveal in the morning and then let us drive non-camo vehicles for the day. I did drive the SUV on the snow and could feel the 4WD system and the limited-slip differential doing their thing, but beyond that, I can’t say much.

The Yukon has a lot of new stuff for the 2021 model year. This is a new vehicle for the company, and it’s better in pretty much every way. A notable thing to point out is that GMC added a rugged AT4 trim level. It gets things like a two-speed transfer case, traction mode selection with off-road mode, hill descent control, and a whole bunch of exterior and interior updates to give

The company also actually made the Denali trim level luxurious. It always felt like it was pretending before, but now it’s a true luxury machine with real wood trim, luscious leather, tons of tech and large screens all over. An image provided by GMC is below to showcase this new interior.

Here’s a quick list of other features that you should know about:

The 2021 Yukon is better in basically every way possible at least on paper. The new design takes the Yukon up several notches. I just wish I’d had more time with the vehicle to tell you how it really was.

Smashing Through Snow in a Sierra 2500 HD All Mountain 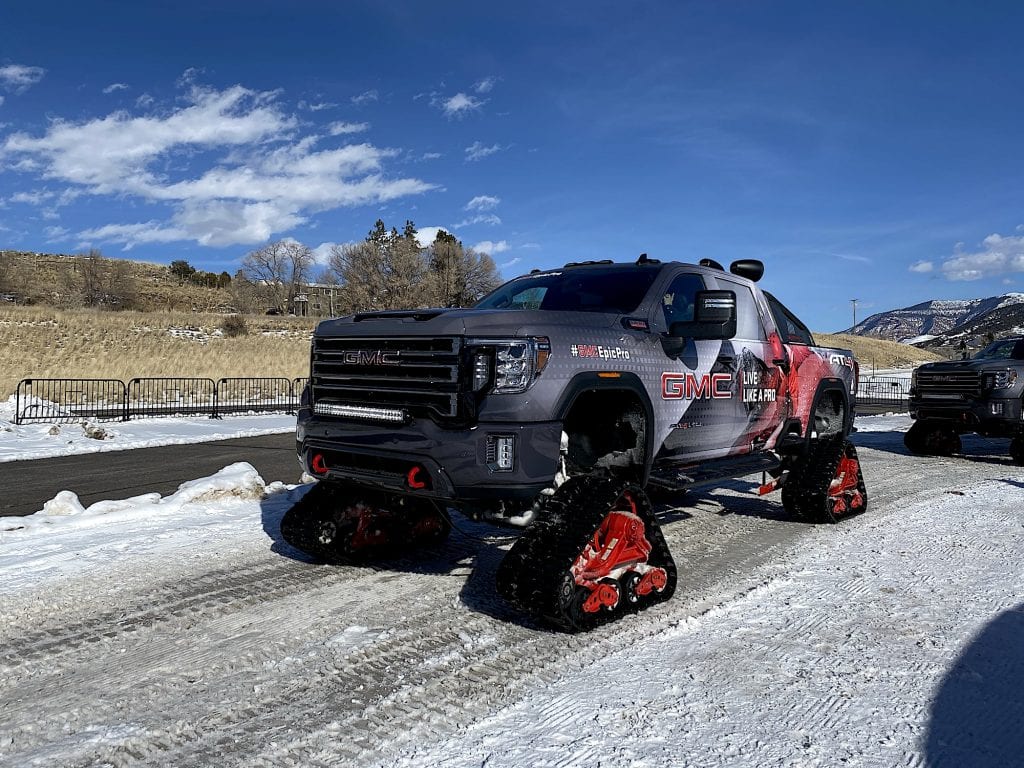 As I said, I’ve driven most of the other vehicles GMC had at the event, so the only other vehicle I was truly interested in getting into was the Sierra 2500 HD All Mountain. This is the typical Sierra 2500 HD with some Mattrack rubber track conversions.

This makes the Sierra a serious beast of a machine and able to take on some seriously deep snow, mud, or pretty much any other sloppy surface you come across. 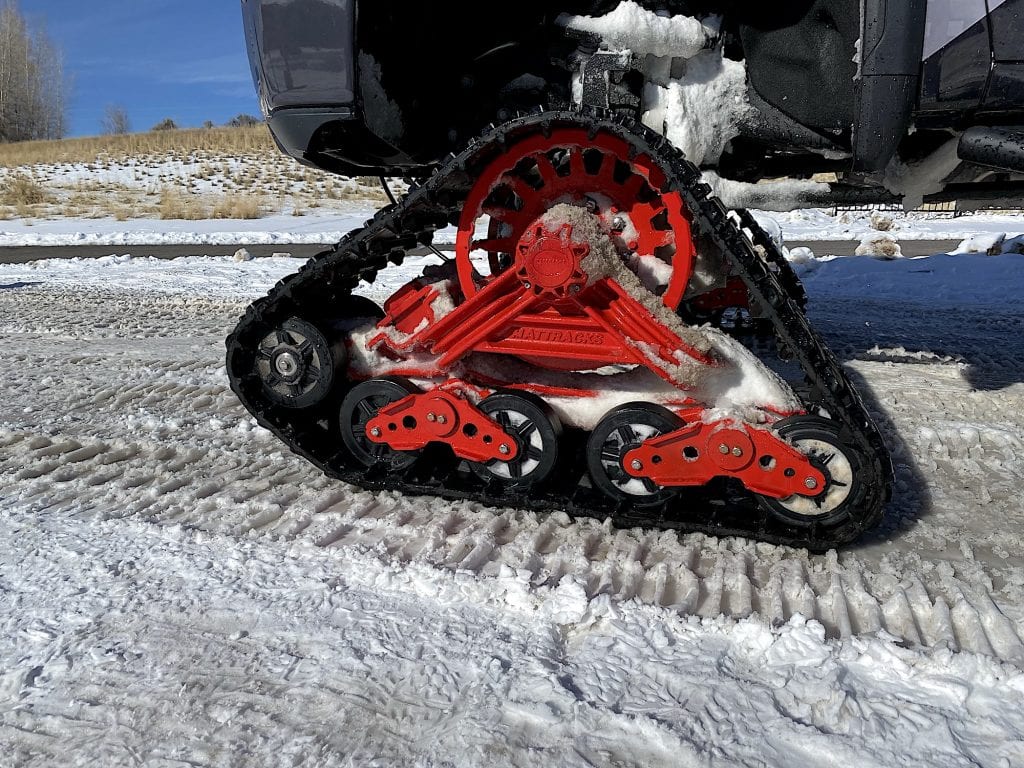 Mattracks builds rubber track conversion kits for a wide variety of vehicles. If you were wanting to do this to your truck, then you’d need to buy the kit aftermarket. The kit bolts on to your vehicle in place of the wheels and the regular drivetrain drives the Mattracks, making the vehicle more capable than ever before. We were limited to 30 mph, though.

GMC let the journalists in attendance take the trucks out into a snowy field where there was a kind of track laid out. What surprised me about the tracks is that they do provide a lot of traction, but you can still get the truck to slide around a little bit with minimal effort.

These track aftermarket accessories have been going around in the last few years. Nissan had some similar ones attached to its trucks and SUVs a year or two ago.

It would have been cool to see these operating in truly deep snow, but GMC had to work with what nature provided and that was about 10 inches to a foot of snow. 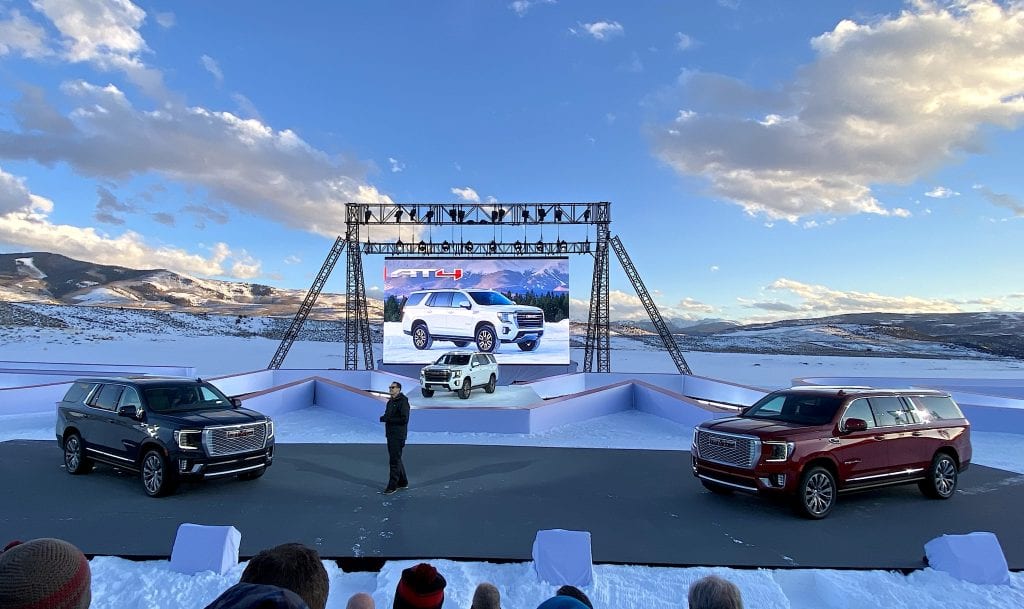 Once everyone had a chance to get in the Yukon and anything else they wanted to drive, GMC loaded us back on a bus and drove us to a nearby ranch where the PR team prepared a truly spectacular space for the official reveal of the Yukon.

The presentation started with the unveiling of the Yukon Denali. They discussed the merits of the SUV and all the systems and technology involved. I’ve discussed all of that above, so I won’t reiterate here. But I will say that this vehicle is leaps and bounds ahead of the current model. I think GMC could have a real winner on its hands. 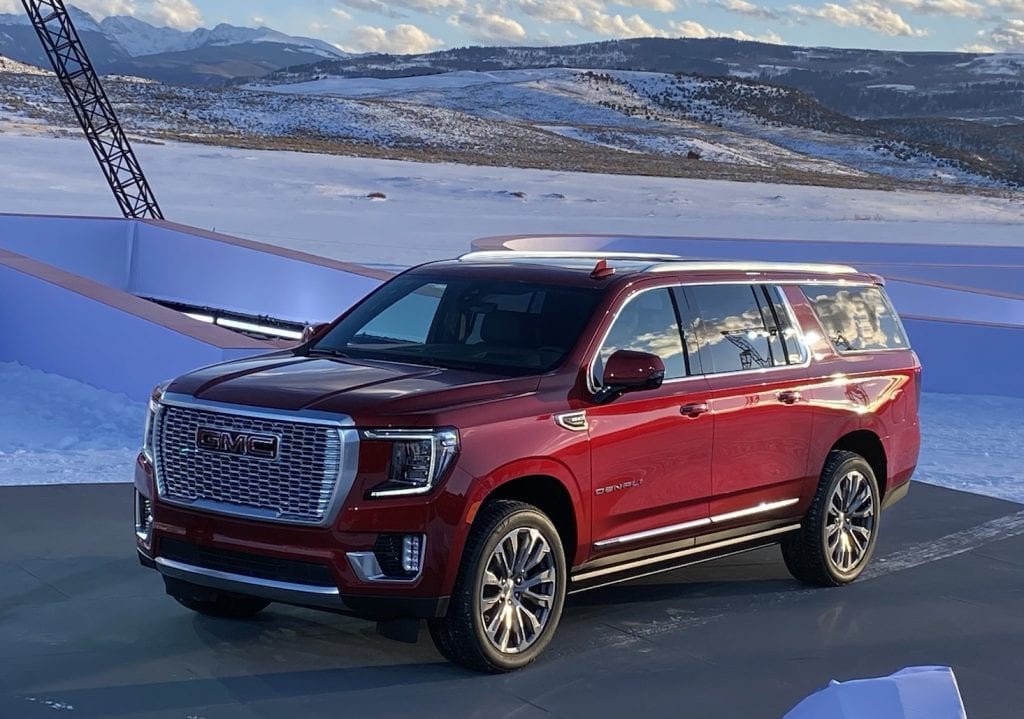 Next up, GMC revealed the Yukon XL Denali (pictured above). When the two models are side-by-side, it’s much easier to see just how big the XL really is. It’s long, really long, and the hood is about at my height. It’s just a massive vehicle all around.

Last, but certainly not least, GMC revealed the Yukon AT4. This is still a pretty new sub-brand for GMC and takes the Yukon to a much more rugged and darker place. It was especially clear just how different the vehicle looks by placing it next to the Denali versions of the vehicle.

The Full AT4 Lineup, Including the New Terrain AT4 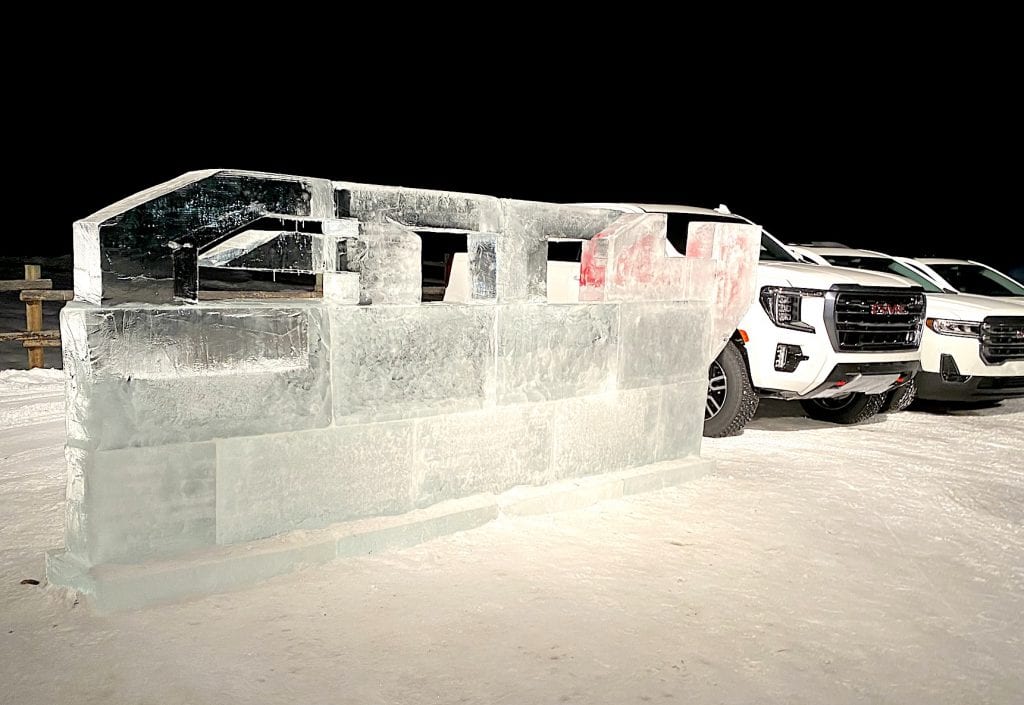 After the official reveal, GMC offered us dinner. At dinner, the company revealed the entire lineup of GMC vehicles in AT4 trim. It’s clear that the company plans to make the AT4 an important part of GMC and not let it just sit on the Sierra trucks.

I have mixed feelings about the AT4. GMC’s whole brand experience is supposed to be a luxury one, and adding a rugged trim level seems to go against the brand’s ethos. With that said, the Sierra pickups look fantastic in this trim level, and GMC obviously wanted something similar to Chevrolet’s Trail Boss trim level.

GMC’s special surprise was the new Terrain AT4. The Terrain had not had an AT4 trim level before this point, and it does look to be a wonderful addition to the lineup. 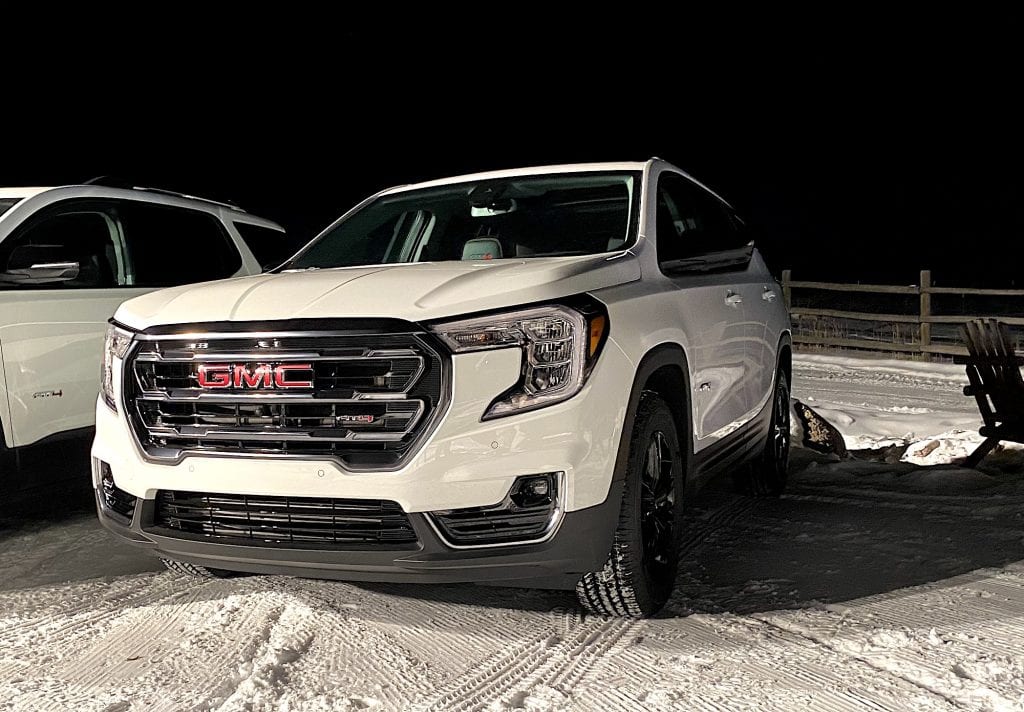 GMC didn’t say much about the Terrain AT4 other than telling us to go look at it. The model features some AT4-appropriate updates, giving the model a more rugged look. The vehicle gets a new grille, new headlights, and some interior updates.

GMC did say the model will get some technology updates, but it’s unclear what that means. One thing I would expect is a designated off-road drive mode. 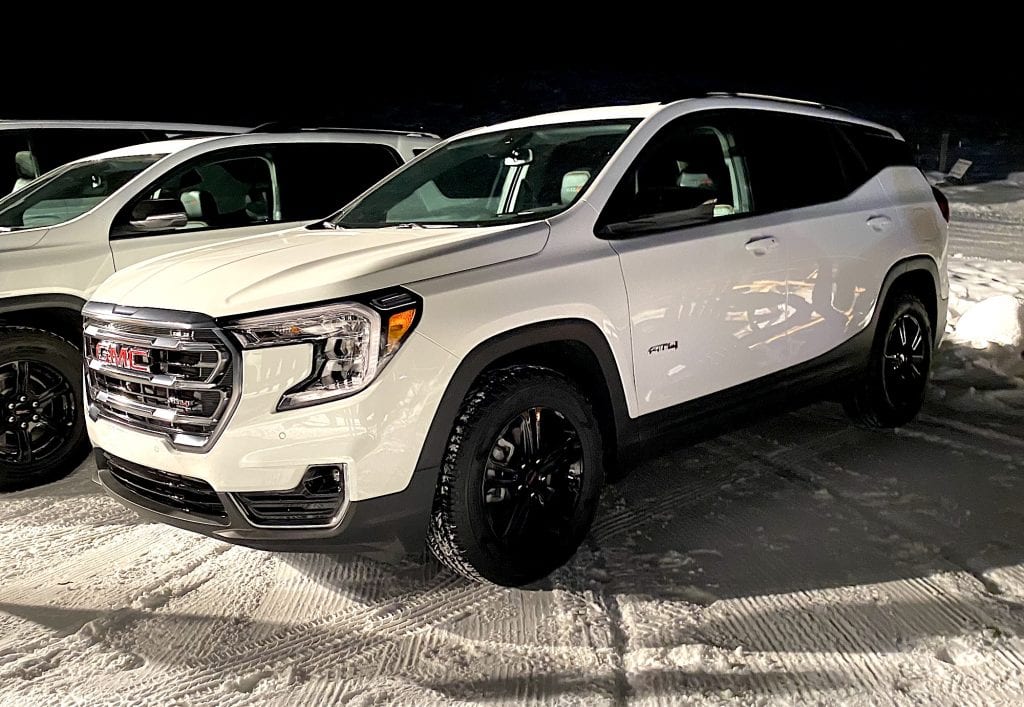 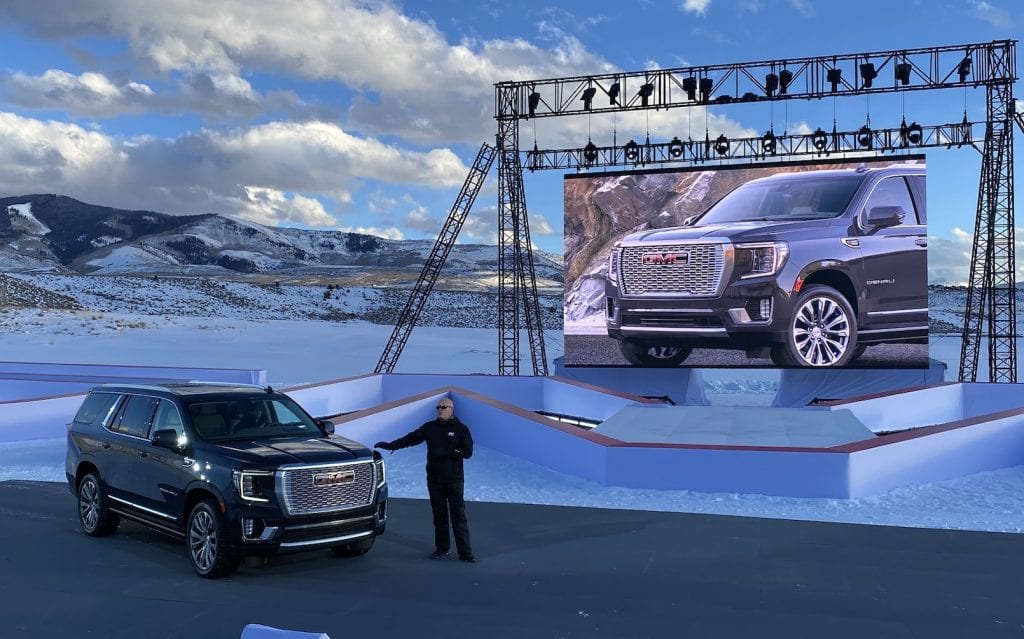 The addition of the Yukon and the Terrain AT4 should significantly the company reach its sales goals. The Yukon will be the truly big seller here. The model has an important place in the segment.

Overall, GMC has done better in the last year than most other automakers. The brand was up more than 1.5 percent in the U.S. alone, and GMC said overall growth was about four percent. That bodes well for the company in 2020.

While the new additions to the lineup won’t hit until the very end of the year, there’s a lot of good things going on with GMC right now. Any company that can see growth in a year when the industry is down in sales overall is doing pretty well.