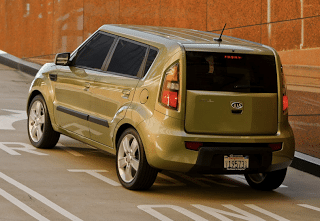 Big league automotive designers will invariably tell you that designing small vehicles is more challenging than adding huge style quotients to large vehicles. Lines can’t be as long. Specific attributes won’t extend. The canvas is just too tiny. Designers of the Kia Soul, however, managed to utilize large car proportions with small car dimensions to create one of the most handsome econocars in a long time.

Priced in a basement labelled, “Bargain”, the Kia Soul offers the sort of trim and equipment small car buyers expect. Under the hood, power is far from prodigious but plenty for a vehicle of the Soul’s size. Handling is set up to be significantly more sporty than that of the Nissan Cube, the Kia Soul’s most direct competition. The Soul’s interior fit and finish bears the trademark of an improving brand – not Audiesque but bunches better than it once was in Korean cars.
People generally flock to the newest or flashiest product, whether it’s phones or clothes or interior decor or…. cars. And as we all know, people generally don’t care if that newer, flashier product is a little more expensive. Imagine the newer, flashier model being the inexpensive model; a solid all-around model with everything you need and want. To be precise, you don’t need to imagine any longer – the Kia Soul is the newer, flashier, less expensive model.
—–
Engines: 122/142 horsepower; 115/137 lb-ft of torque from a 1.6L inline-four and a 2.0L inline-four
Base USD Price: $13,300
City Mileage: 24-26 mpg
Square Route: The Soul’s battle with the Nissan Cube has been thoroughly chronicled here at GoodCarBadCar.net. Beyond that, the Scion xB and Honda Element have played the boxy field, too. Through a healthy chunk of 2009, it seems as though Kia’s the one brand to have successfully decoded the formula in both the USA and Canada. The route to square is through Guangju.
CLICK HERE FOR THE GOOD 12 v3.0 PART IV
CLICK HERE FOR THE GOOD 12 v3.0 PART VI