INFINITI – WHAT OTHERS SAY

“The Infiniti’s throttle finally feels right. Accelerating away from a light – even when just breathing on the gas – no longer induces head-snaps in passengers.”  MotorTrend on their long-term Infiniti G35 S after an electronic update.

“In exchange for speed, spectacular dynamic abilities, and an attractive price, the G35 trades refinement and finesse. As with most deals with the devil, the source of the G35’s great power is also the source of its defeat: a raspy but very strong 306-hp, 3.5L V6.  It doesn’t take long to tire of the mechanical drone that accompanies every piston stroke.”  Car&Driver on the Infiniti G35 S in a comparison with the BMW 328i, Cadillac CTS, and Mercedes-Benz C300 Sport.
See what GoodCarBadCar said about the G coupe and sedan in December
“With impressive power and plush, an M35 in Luxury, Sport, or AWD M35x trim still offers budget-bound Sybarites lots to like.” MotorTrend, in their annual New-Car Buyers Guide.
“Immediately the drivetrain feels tighter and more polished than that of Nissan’s excellent coupe. There’s no slack or slop at all between your right foot and the power delivered to the rear wheels. The gearbox is very positive but very slick and you can punch through brutal shifts and still be rewarded with a seamless leap from one gear to the next.” evo, on early European exposure to the G37 S coupe that the UK won’t receive until next year.

“Tonight in Geneva we saw the whole thing. Carlos Ghosn himself introduced the new FX at a club-like venue just down the road from the Palexpo. Accompanied by some choreographed theatrics, the new FX dropped from the ceiling and landed front and center ahead of its EX37 and G37 siblings, which will join it in the new Infiniti dealerships starting up in Europe this year….. Personally we’d be remiss if we didn’t note that although most of the changes sound great, the second-gen FX doesn’t improve on the previous generation in the styling department.” AutoBlog direct from the debut of the Infiniti FX50.

“Beefiness is the leitmotif with the range-topping Infiniti FX50.” Edmunds, getting quite wordy in describing the newest member of Nissan’s luxury division.

“A man with gigantic bat wings strapped to his arms walked through the assembled crowd to start proceedings off. Could this be a nod to communications director Wayne Bruce we wonder? Sounds odd, but it was as brilliantly flamboyant as the rest of the evening.” CAR Magazine with its description of the FX50’s evening debut in Geneva.

See the GoodCarBadCar of the FX50 right here

“Jump in, start driving and by the third switchback, it’s obvious the G35 Sport lives for cornering. The weighting in its steering builds up naturally, and there’s ample feedback from the Bridgestone Potenza RE050A tires. In transitions, it more seamlessly flows from one corner to the next, in a way the CTS approaches but can’t quite match.” Road&Track in comparing the G35 S with the Cadillac CTS.

Check out all Infiniti-related articles with a simple click

“So which is it? Technically, we come down on the side of “wagon,” an empirical decision based on overall height lower than 64.4 inches. But falling for a new car is not a technical decision, and Infiniti is revving up the spin machine to distract from the obvious—our eyes tell us this is a five-door hatchback, the body style that’s famously unsalable to Americans. You spurned it as a Chevy Citation, you abhorred it as a Pontiac Phoenix, you eschewed it as a Saab 99, and you pretty comprehensively shunned it as a Lexus IS300 SportCross.” Car&Driver discussing with itself the body shape of the EX35.

Which crossovers must the EX35 do battle with?
“The Infiniti QX56’s cabin strives to impart the requisite luxury SUV opulence but ultimately misses the mark. Plush carpeting is underfoot, rich leather cradles your hind parts and gleaming bird’s eye maple and aluminum accents abound. However, the interior is marred by some downmarket plastics, and up until the ’08 model year, the instrumentation and controls had a dull, utilitarian look. When it comes to true luxury in full-size proportions, the competitively priced Mercedes-Benz GL450 offers a more convincing show.” Edmunds talking about the luxury credentials of the full-size QX56. 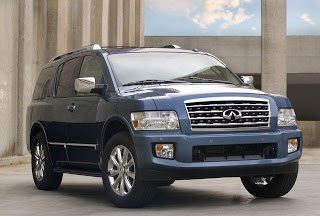