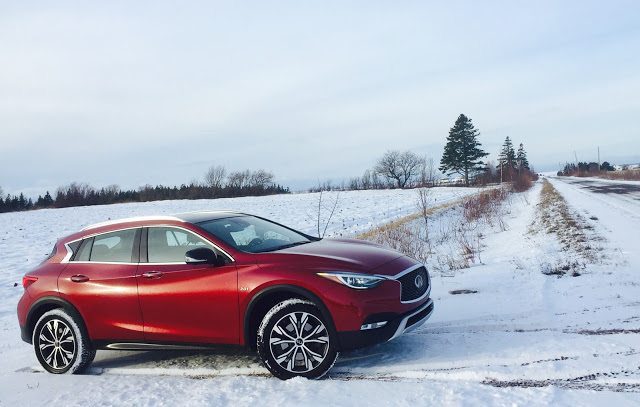 Through the first 11 months of 2016, Canadians acquired 35% more subcompact luxury utility vehicles than in the same period one year earlier.

The 12,725 copies of the Audi Q3, BMW X1, Mercedes-Benz GLA, and Infiniti QX30 sold represented a five-times increase compared with the same period from just three years ago, when the BMW X1 was setting the stage for a larger German incursion that would eventually produce this British-built Japanese insurgent, as well.

Using Mercedes-Benz architecture and English workers, the 2017 Infiniti QX30 arrived with little fanfare from Sunderland in August. A relative handful have been sold in the intervening months, as Infiniti gradually ramps up supply and begins to more deliberately market the company’s new entry-level model.

Most Canadian luxury SUV buyers don’t opt for a vehicle this small. One size up, the Audi Q5 and Acura RDX – not eve including their many rivals – combine to easily outsell this subcompact sector.

Yet tastes are changing, demand is shifting, and the market is moving away from conventional luxury cars, and cars in general, toward utility vehicles.

The Infiniti QX30 is no hardcore SUV. To many prospective buyers, however, the QX30 will appear to be more than just a car. Yet while others will make an even more delayed appearance at this particular party, Infiniti won’t find it easy to make major inroads.

The three competitors that were already on stage are fielded by Canada’s three highest-volume luxury brands. Collectively, they hold a tight grip. Does the QX30 have what it takes to overcome such formidable obstacles? 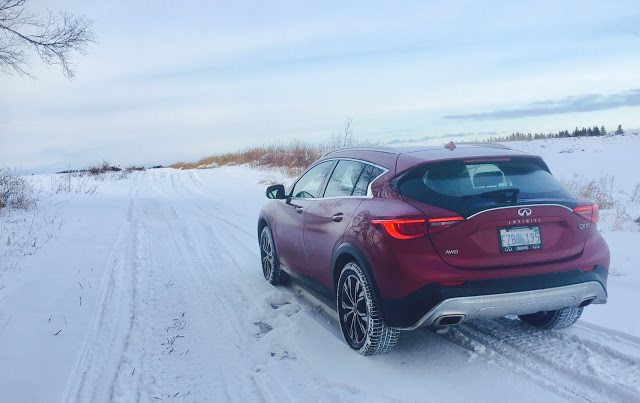 Although Nissan grabbed the Mercedes A/B/CLA/GLA-Class architecture for the company’s upmarket brand, Infiniti’s Mercedes-Benz relation appears sufficiently differentiated thanks to a more curvaceous exterior and a mix of Benz and Nissan parts inside.

The powertrain, a 2.0L turbocharged four-cylinder producing 208 horsepower hooked up to a seven-speed dual-cliutch automatic, is the same, but Infiniti tuned the QX30 for greater smoothness and less aggression. The suspension tuning is different, as well. But there’s no mistaking the QX30 for a Nissan-developed car. This is a German-based, England-built Infiniti crossover.

HOW BIG IS IT?
The 2017 Infiniti QX30 is essentially the size of a traditional compact hatchback such as the new Honda Civic Hatchback or the Mazda 3 Sport. Riding on a 106.3-inch wheelbase that mirrors those two cars, the QX30 is a few inches taller than the Civic, nealy four inches shorter bumper to bumper, and nearly an inch narrower. There’s less rear seat space, however, and the Civic Hatchback provides 34% greater cargo capacity.

BMW’s X1 is the top-selling vehicle in this subcompact luxury crossover class. The X1 is half an inch longer, a few inches taller, and virtually identically wide. Behind the rear seats, the X1 has 41% more space for stuff.

DOES IT WORK?
The 2.0L turbocharged four-cylinder certainly does. As in every application, this small Mercedes-Benz powerplant punches above its weight class, with a thumping 258 lb-ft of torque making its presence known just above idle. Infiniti seems to have reduced some of the seven-speed dual-clutch automatic’s aggression, thereby smoothing launches and generally normalizing a gearbox that is sometimes an impediment.

The powertrain still isn’t perfect. Turbo lag is periodically evident, the Eco mode is always too eco-minded and the Sport setting is annoying when you don’t want to hustle.

Nevertheless, the engine’s mannerisms suit the overall demeanor of the car. Complaints you may have read elsewhere regarding the QX30’s poor ride quality certainly don’t pertain to this QX30 AWD. Serene? We wouldn’t go that far, but it lopes down an undulating road quite nicely, not crashing about like the CLA250 but rather taking the GLA’s improved tolerance one step further.

At least in isolation, lacking a back to back drive, the QX30 AWD comes across as the less sporting, more comfortable car. Becauise of lower ride height, different weight distribution, and different wheels, the two front-wheel-drive QX30s could present unique characteristics.

‘;
document.getElementById(“vinads_div”).innerHTML = lfAd;
}
});
Not unique will be the interior designs of the different QX30s. Climate controls are positioned way too low, legions of buttons are scattered across the dash, the annoying console-mounted shifter (not the GLA’s rinky-dink column shifter) isn’t intuitive, the steering column’s sole stalk is overburdened, rearward visibility is horrendous, and a surprisingly decent amount of rear seat foot and legroom is neutralized by limited headroom and difficult access. The cargo area bears no resemblance to the cargo area of a typical compact hatchback. These complaints belong to every QX30, regardless of trim or drivetrain.

But as the price climbs toward $50,000, issues that may otherwise be minor become glaring errors. There’s no power liftgate, a bizarre omission in a vehicle at this price point. A $35,394 Hyundai Tucson has a power liftgate.

Many automakers have also come to understand the need to warm hands that can’t be gloved if a central control knob or touchscreen are to be operated. Yet in the midst of a Canadian winter, the $48,635 Infiniti QX50 AWD – indeed, even a QX50 Sport loaded up at $49,235 – offers no heated steering wheel. Of course a $20,995 Kia Rio has a heated steering wheel.

There’s also no keyless start in the Infiniti QX30, even a QX30 AWD luxxed up with $7500 in options. Like so many new cars, you don’t need to pull the key out of your pocket to gain entry – proximity access takes care of that. But you’ll need the key a minute later anyway. A $25,450 Honda Civic has pushbutton start to go with its proximity access.

IS ANYONE BUYING IT?
Keep in mind, it’s still early days. In the U.S., QX30 sales began in August and rose to 723 units in October before falling back in November. 1519 were sold through the end of November. Mercedes-Benz sold 6819 GLAs in the last three months.

In Canada, the story is similar, albeit at a lower level. 123 QX30s were sold in October, the QX30’s second full month. 351 were sold through the end of November, a period in which Mercedes-Benz Canada sold more than 1000 GLAs. 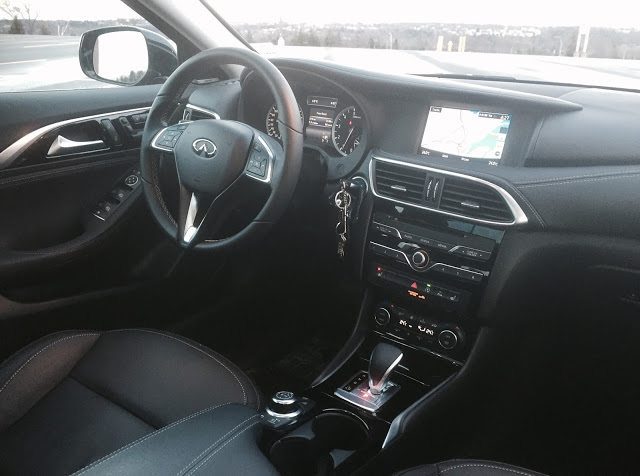 SHOULD I BUY SOMETHING ELSE INSTEAD?
You’ve likely got your eye on the Mercedes-Benz GLA. With Premium and Premium Plus packages plus upgraded Harman/Kardon audio, navigation, a panoramic sunroof, and park assist, the GLA250 is priced at $48,555.

It’s sensible to also consider the BMW X1. The Lexus NX is an odd-looking beast but handles well and offers more – relatively speaking – of an SUV feel. With the QX30 optioned up so heavily, consideration of the larger Audi Q5 would be wise at this price point.

Although it may not suit the premium badge sensibilities, a Ford Escape Titanium would offer superior driving dynamics, similar features, and more space for less money, or you could look at the Escape-related Lincoln MKC.

If you want big power, the Infiniti QX50 isn’t much more spacious than the QX30, and it also feels rather old, but it’s a big league performer. The Volvo V60 Cross Country also deserves mention as a slightly high-riding wagon with relatively compact exterior dimensions.

HOW MUCH SHOULD I PAY?
If you want all-wheel drive, there aren’t many ways you can configure a 2017 Infiniti QX30. Only one, Black Obsidian, of the nine available colours doesn’t cost at least $650.

There are then two available packages, the $5000 Premium and $2500 Technology, the latter of which requires the former. Want blind spot monitoring? You’ll have to pay at least $47,985 for your QX30 AWD.

WHAT’S THE VERDICT?
For reasons more subjective than objective, the 2017 Infiniti QX30 AWD seems to be a better Mercedes-Benz GLA250 4Matic than the Mercedes itself. Some of the rough edges have been smoothed off, the styling is more eye-catching, the car looks and feels more premium.

Timothy Cain is the founder of GoodCarBadCar.net, which obsesses over the free and frequent publication of U.S. and Canadian auto sales figures. Follow on Twitter @goodcarbadcar and on Facebook. The QX30 was supplied by Nissan Canada’s press office.