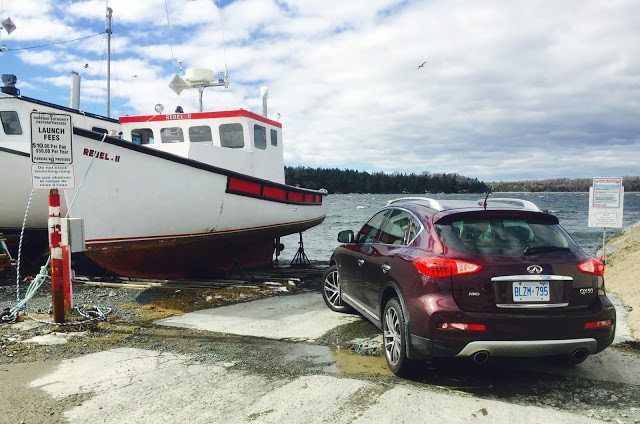 The Infiniti EX35 arrived in North America at the tail end of 2007. The engine was upsized – as the name became EX37 – to a 3.7L V6 for model year 2013. For model year 2014, Infiniti changed names across its lineup, and the vehicle that was the EX35 and transitioned into the EX37 became the QX50.

Check your calendars. It’s 2016. Since the first EX35 arrived, Mercedes-Benz released their first small SUV, added another smaller luxury utility, and replaced the first one with the all-new GLC. Since the EX35 landed on our shores, Honda has replaced its Civic twice. I’ve lived in five different places since Infiniti began selling the first EX.

Yet this 2016 Infiniti QX50 is very much the same vehicle Infiniti began selling in Canada in early 2008. Except for one hugely consequential change.

Thanks to a 3.2-inch wheelbase stretch, humans can now sit in the Infiniti QX50’s rear seat.

The 2016 Infiniti QX50 remains a tidily packaged vehicle overall. At 186.8 inches from bumper to bumper, the QX50 is about four inches longer than the Honda Civic, Canada’s best-selling car. The 2015 QX50 was the same length as the new Civic. With 527 litres of cargo capacity, however, the newly lengthened 2016 QX50’s cargo area is the same size as it was before Infiniti stretched the small crossover, as all of the 2016 model’s extension was spent on the rear seat.

The QX50 was undoubtedly in dire need of a rear seat that could swallow humans, and the new model meets that need. Alas, the QX50 is in dire need of some other fixes, but NVH refinement, material quality upgrades, and proper utility vehicle ride height and cargo volume alterations were left at the wayside.

Many of the QX50’s deficiencies are cancelled out by many of the QX50’s talents. In a segment chock full of competitors with small turbocharged four-cylinder engines cranking out less than impressive horsepower totals, all QX50s are equipped with naturally-aspirated V6 pumping out 325 ponies. It’s an astoundingly quick hatchback if you can tolerate the coarse 3.7L’s grumbliness below 3000 rpm and prompt your right foot to more firmly prod the accelerator.

Meanwhile, though the QX50 provides little of the ride height advantage linked to modern crossovers, its lowness pays dividends in the ride and handling equation. The QX50’s low-slung chassis is a blessing on a twisty, rural road. Turn-in is quick, the body remains flat in corners, and sudden changes in direction are met with no alarm, as you’d expect in a vehicle which shares its architecture with the rear-wheel-drive Nissan 370Z.

Meanwhile, the long-wheelbase causes the QX50 to lope along the same rough roads that would cause many other small luxury SUVs to crash and bounce about, albeit with appropriate overall firmness.

In a luxury sphere increasingly laden with fast but charmless vehicles, the QX50’s knack for making swift progress with alluring on-road characteristics is a welcome breath of fresh air. For true enthusiasts searching for a small luxury wagon, the attractive price of entry, hugely powerful V6, and sporty dynamics force the QX50 into contention, regardless of its senior citizen status.

Yet at the same time, pursuit of an actual QX50 purchase or lease – even with the new rear seat, the high content levels, the comfortable driving position, and that big V6 – requires prospective Infiniti customers to look past glaring faults which most every other $35K+ vehicle has extinguished. A noisy cabin with excessive hard plastics. Allegedly real maple wood accents which do a convincing job of appearing faux. Buttons, buttons everywhere. A tiny touchscreen. Seat memory buttons on the door which protrude as though intentionally chilled in a thin t-shirt on a breezy summer’s day. These are not attributes which a luxury contender make.

But recognizing that our elders are worthy of our respect and our time is very different from spending every evening playing bingo at the local legion.

Timothy Cain is the founder of GoodCarBadCar.net, which obsesses over the free and frequent publication of U.S. and Canadian auto sales figures. Follow on Twitter @goodcarbadcar and on Facebook. The QX50 was supplied by Nissan Canada’s press office.