In light of the stunning new Infiniti FX50 and what will be its weaker brother, the FX37, GoodCarBadCar looks back at a week in the first generation FX35.  The article you can find below was published by The Good Car Guy in the Chronicle-Herald in early 2005.  Looking back at pictures of a week’s worth of Christmas goods in the back of the FX35 helps me to see just what BMW’s thinking is when it comes to the X6.  On the other hand, Infiniti lacked the ‘utility’ part and went heavy on the ‘sport’ but went high on style, not high on ugly.

So before pictures of the new FX are revealed here on GoodCarBadCar – during what will likely become known as Infiniti Day – have a read about the Infiniti FX35 Driven.  Oh, for other historical test drives, read this Integra Memorial and Back In Time Volkswagen Golf.
—–
CAR-LIKE? TRY SPORTS CAR-LIKE

This is a story about how the words performance, sport, and utility mix. On few occasions have sport-utility vehicles been so composed, with such precise steering and controlled body motions, all the while featuring increased ride height when compared with a car. This is the story of my time with an Infiniti FX35.

Now, I’d be remiss to not mention that the FX35, with its 3.5litre V-6 producing 280 bhp, is a luxury-wagon-SUV-crossover. The FX45 adopts a 4.5L V-8 for an extra 35 horses along with some exterior touches to provide a more authoritative presence. Every FX goes out the factory doors with auto climate control, an impressive stereo with a 6-CD changer, full leather interior with heated and powered seats in the front, and an array of safety features. But judging from my logbook, it’s the performance that made me take notice of what sets the FX apart from the crowd.
Oh yeah, don’t forget that this is one of the most dramatically styled sport-utes you can buy, sitting squat on its big wheels, with narrow head and taillights, a large and heavily chromed grille, and a low roofline. The view from the front seats out over the bulging, curvaceous hood is something to behold. The Infiniti received numerous stares and pointed fingers during my time in Prince Edward Island where I never once saw myself coming the other way. In fact, a relative of mine gently stuffed his van in the ditch while reversing, because he just could not take his eyes off the extreme FX35.
All Canadian FX’s are driven by 4 wheels and a 5-speed autobox, and the AWD inspired my secure feelings on twisty, snowy roads outside Tatamagouche and on Trans-Canada highways after the big post-Christmas storm. The AWD and its co-hort Vehicle Dynamics Control (VDC) still allowed a touch of low-speed four-wheel drifting.
I expected a vehicle like this to challenge my need for adequate visibility, but I had no problem seeing out of the FX; only the rear-most glass gave me a couple problems. Headlights were powerful, high-speeds produced little unwanted noise, the ride was controlled but not harsh, the hatch would have held a lot more were it not for the tenderness our presents necessitated, and all around the Infiniti was a pleasure to doddle through Summerside, Charlottetown, and Halifax. But, and this is a good but, a country road was where the fun would be had. 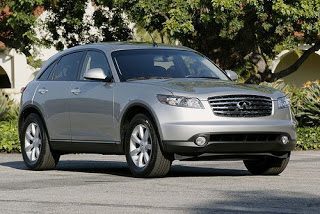 To put it simply, the FX35 did not handle well “for an SUV.” In fact, the FX35 was not just good enough to be considered car-like. In reality, this Infiniti was downright fun-to-drive. To my mind, considering the not ideal vertical weight distribution of a sport-utility like this one, the FX had no right to possess such back-road skills. The 18-inch wheels featuring 265/60R18 all-season tires granted me grip liberty that I had not expected. This is a tied-down vehicle that offers the jacked-up sightlines that many people crave, while carving around corners and curves in a way I would not have thought possible. Accelerating into a 45 degree right-hander that leads onto a major highway required no forethought, simply give it some go and the FX hangs on tight with little body roll and no unpleasantness. Ask yourself before you plump $60,500 for an FX45 with its high-grip 20-inch wheels if the $52,900 FX35’s 18-inchers don’t give you enough stick. Then ask yourself if you want to trade the 35’s controlled ride for the so-called “harshness” of the V-8-engined derivative. Your choice.
You’ll lose more torque than horsepower going for the V-6 versus the V-8, 59 lb-ft of it. If the only FX you drive is a V-6, you’ll likely not yearn for more power once you overtake a slow-mover on a two-laned straightaway. I found this is where the V-6 did its best work, although accelerating from rest is a pleasure as well. I imagine the V-8 would be even more hasty, if you’re willing to lay down the dough.
There is a high-tech package available for all FX’s that includes a rear-view camera and a rear-seat DVD player, among other things, and the likely reasoning behind packaging it all into one is the savings in manufacturing costs. While corporate heads at Nissan/Renault save money this way, you pay $7900 for the privilege.
But is high-tech what this Infiniti is all about? There is luxury on offer here. But my more serious question for O’Regan’s Infiniti salesman Doug Botchett was what the driving force behind buyer’s decisions were, whether styling, performance, luxury, or maybe brand-image. “Predominantly performance,” he told me. Yes, performance. After taking a spin in an FX35, all else will likely be forgotten, and your memories will be of the devestating effectiveness of the united parts under the skin of this Infiniti.