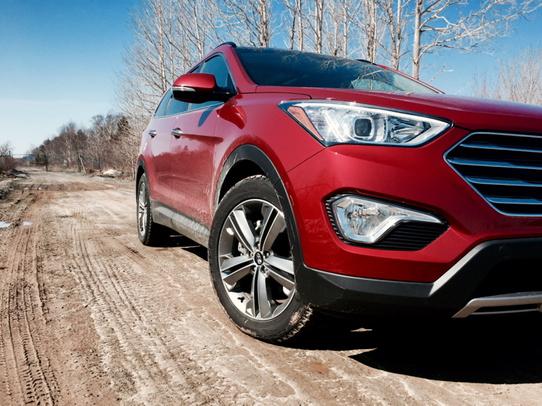 A few weeks ago we published a video of real-world use in the MyFordTouch system in Ford’s 2015 Fusion, a fully-loaded Titanium model. People like to complain about MyFordTouch’s slow response times, so we thought it made sense to actually show MyFordTouch in use.

We chose the radio screen, not for any reason other than the fact that those functions are what we tend to use most often in a test car, not to highlight the ever-present issue of slowness. But because SiriusXM channel surfing has been slow in so many cars for so long, some people thought it wasn’t a fair display, despite the fact that no real conclusions were drawn in the video itself. We just let you watch.

But as proof that an infotainment unit can cycle between satellite radio categories and channels swiftly, here’s a brief look at the same type of functions in the 2015 Hyundai Santa Fe XL Limited, the vehicle that’s visiting GCBC this week.

A full review of the Santa Fe XL (simply known as the Santa Fe in the U.S. – it’s further distinguished from the two-row Santa Fe Sport in Canada with the XL badge) will be published in the coming days. You can read our review of the 2013 model here.