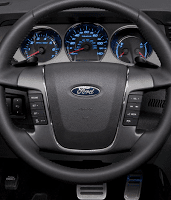 Ford Motor Company is on a roll. CNN anchors will tell you it’s because their “all-new” model range is so terrific. Financial analysts point to the bankruptcies of General Motors and Chrysler and the absence of government intervention at Ford as part of the reason customers have turned to Dearborn’s products.

Despite the public outcry for more small cars from domestic manufacturers, Ford still offers a wide variety of trucks and SUVs. And it’s a good thing. Fusion and Focus sales may be better than expected, but without the F-Series and Escape, Ford sales as a whole would be something of a blip on monthly GoodCarBadCar.net’s Sales Stats reports. 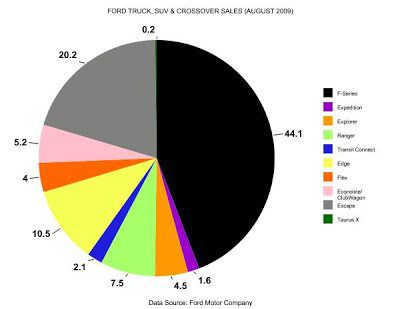 The Graph above (click to make larger) shows each Ford SUV, crossover, or truck as a percentage of the whole Ford truck/SUV/crossover total. Combined, this equates to 103,420 vehicles. Ford sold 57,626 cars in the States last month. That total includes the Taurus, Crown Victoria, Focus, Fusion, and Mustang.
Strangely, Ford became the poster child for domestic automotive production over the last few months. While not attempting to degrade what the company has achieved, this is still an interesting status for a company which sells half as many car models as “trucks”, and does so half as often.