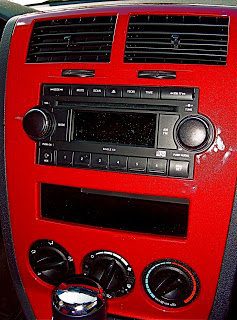 Proof of the Dodge Caliber’s greatest problem, summed up in one photo, can be seen below. Fingerprints? As a symbolic representation of the cheapness of the Caliber, the body-colour plastic surrounding the stereo and climate controls is a wonderfully unfortunate symbol.

Cheap can be viewed in a positive sense, but only when a $ sign is closely linked. For more info on that front, check out Caliber Part I. For more photography of the red Caliber SXT that came into The Good Car Guy’s garage, check Caliber Part II.

It’s established then: Dodge Calibers are cheap… and cheap. At one point, this new Caliber SXT rolled up its passenger-side power window with more distressed noises than Dubya makes trying to figure out the Google. What do you expect from one of the North American auto market’s most spacious-per-$ cars?
Indeed, space is plentiful. In fact, not only is legroom and hiproom and headroom readily available, but the space fillers are quite useful, too. Small cargo areas are everywhere and the glovebox is huge. This isn’t news to you; it’s a major part of Dodge’s advertising when it comes to the Caliber and its Jeep companions.
Actually driving the Dodge Caliber exposes a body that may have spent substantial time in a passenger seat to an unenviable new experience. Granted, the Caliber in GCBC’s car was equipped with the CVTransmission – many Calibers are. For a vehicle that’s sized and priced as an urban runabout, this Caliber SXT was awfully terrible at running about urban areas.
Few inexpensive vehicles that I’ve driven in recent times are more subject to completely different reactions dependant on the type of road. Highway cruising is A-okay. The CVT responds normally. Plus, the seats are quite comfortable and you’ve got room for your stuff and yourself. Terrific news, right?
Until you take the exit ramp, that is. Equipping vehicles with CVTs has become more common, and Nissan has actually made good on the efficiency promise while also offering decent drivability. On-off-on-off and back on the accelerator in a downtown traffic jam makes you wish for a simple 4-speed auto from an older GM model… just something to offer relief. Coming upon four-way stops in a suburban area, such as on the school-run, would be nightmarish. In fact, though it wasn’t the school run, the eight or ten stop signs we drove through during a brief five minute span made me want to stop the Caliber; get out; and never get back in. 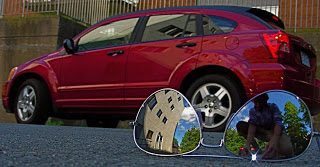 Sounds harsh, doesn’t it? Even worse, not all of my agony can be attributed to the CVT. What seems to portray itself as a really smooth ride, the kind that won’t worsen significantly on rough roads…. actually gets really bad on rough roads. Rough roads like the kind we traversed in that five minute span mentioned above? Uh… yeah.
More unfortunate driving dynamics start to show themselves when the going gets twisty. For a car of this size – perhaps for a car of any size – the front end wanders uncomfortably. No, it’s not pleasant in the way the front wheels flow with the road in a Porsche 911. This is a completely different; more substantial disconnect.
Pairing the peppy 4-cylinder engine with a 6-speed manual would make a substantial difference. Then again, discovering that the financial gains you’d possibly be able to find with the Caliber (discussed in Part I) must answer to poor fuel economy. GoodCarBadCar.net’s Caliber SXT tester achieved worse than 23mpg overall, about what Fueleconomy.gov says it should achieve in the city. Toyota’s Matrix models spans that same fuel economy region. The Honda Fit is up in the 27/28 city mpg spectrum.
Calibers, quite obviously, are not perceived by The Good Car Guy to be a good car. As far as the Caliber’s status as a bad car, keep in mind that the small Dodge didn’t find itself onto the Bad 8 list for 2008. With more exposure, I fear its chances of getting there will improve. Unfortunately.