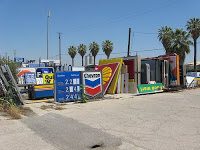 Choosing not to stand idly by as oil companies rake in profits vastly exceeding what was deemed possible just ten years ago ($18,670,000,000 net income last year for Chevron), consumers the world over are protesting. One German man lit a BMW on fire to make his point. Truckers… er, lorry drivers, have parked in England in order to manifest their personal difficulties.

What does Larry King do? He brings David O’Reilly to his desk tonight on CNN (9 eastern, 10 atlantic). As the promo says, “Larry goes straight to the top for the answer. The Chairman and CEO of Chevron explains why fuel prices are through the roof and how the coming months could cost you!”
Choosing to stand in ignorance as commodity traders speculate and oil companies run a business, Larry will probably ask questions meant to irritate O’Reilly and discover – poof! – out of thin air; that the so-called “Big Oil” is in partnership with General Motors and Ford and Chrysler and that we’re stuck in a vicious circle necessitating great expense on our part at the pumps with “inefficient” vehicles.
Nah, Larry’s smarter than that. People will want those questions asked, and Chevron’s boss will likely feel defensive on that front. Regardless, it’ll be worth watching.