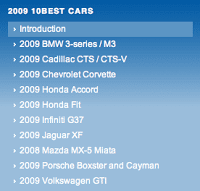 CAR AND DRIVER ANNOUNCES 10BEST FOR 2009

From the time he was knee high to a grasshopper – whatever that means – The Good Car Guy has been a faithful believer in Car & Driver’s 10Best. That’s part of the reason why GoodCarBadCar.net’s The Good 12 is modeled after C/D’s 10 Best; with realistic cars (under $71K this year) that can be recommended year-after-year if they remain better than the opposition. Don’t believe that GoodCarBadCar.net will always be in firm agreement with C/D’s editors.

This year Car & Driver named two domestics to its 10Best list. Added to that were four from Europe and four from Japan. The list is below with a sentence from Car&Driver and an additional thought from The Good Car Guy. Keep in mind, The Good 12 v2.0 begins revealing itself on the eighth of December.
—–
BMW 3-Series: “Is this perfection? History has shown that there’s always room for improvement. But even so, in our view, no current family of cars comes closer to that elusive target.”
TGCG: No argument here.
Cadillac CTS & CTS-V: “Cadillac has created many memorable cars. This one is unforgettable.”
TGCG: Stretching only slightly less, I’d say that the CTS is memorable, the V version unforgettable.
Chevrolet Corvette: “… the standard Corvette coupe and convertible continue to deliver a level of performance and style that’s unbeatable for the money.”
TGCG: Indeed, it is the ZR1 and Z06 that show what tremendous value the regular ‘Vette represents, even Chevrolet can’t make its own car look overpriced.
Honda Accord: “It’s equally clear that the Accord has evolved steadily to maintain its position as a mainstream pacesetter.”
TGCG: Contrary for the sake of being contrary, the thought that at some point Honda may need to revolutionize the Accord rather than simply evolve their midsize car can’t help making a nest in my brain; not because Honda will need to but because I want them to. The Accord was a Good 12-winner last year.
Honda Fit: “If there’s a better combination of thrift, practicality, and fun-to-drive, we haven’t seen it yet.”
TGCG: In last year’s Good 12, regarding the old Fit, ” The Fit possesses sharp steering, a snickety-snick gearshift or even a 5-speed automatic, and remarkable economy.”
Infiniti G37: “We’re not immune to the appeal of more power, of course, but there’s more to the G’s story than increased muscle.”
TGCG: The G was a winner at GCBC last year, too. Competition has stiffened, however, even as the G improved.
Jaguar XF: “As pleasant as it is to behold, the XF’s most compelling attribute is outstanding dynamics.”
TGCG: Only the letdown from the C-XF concept that led up to the XF keeps it from attaining glory at GoodCarBadCar.net.
Mazda MX-5 Miata: “… the steering provides that rare sense of connection that makes the car an extension of the driver’s will.”
TGCG: Yet, not as much of an extension as it once was. It is not the Miata’s downfall – no not at all –  just a small discouraging factor that makes me wonder why C/D infuses such exaggeration.
Porsche Boxster/Cayman: “Neither of these mechanically identical mid-engined cousins can be called inexpensive.”
TGCG: A problem, is it not? The Boxster is so deserving, the Cayman incredible but undeserving. So much more money for slightly better handling and the loss of drop-top ability?
Volkswagen GTI: “As an added bonus, GTI ownership includes an exceptionally high practicality factor.”
TGCG: The GTI isn’t special because its fun… for a hatchback. It is fun first and foremost; its hatchbackness secondary.