CAMARO vs MUSTANG vs CHALLENGER vs CORVETTE vs VIPER: (OCTOBER 2009 SALES)

The Good Car Guy has already hosted a hypothetical debate on the classification of America’s “sports cars”. That was a month ago when it was becoming increasingly apparent that more people wanted a Chevrolet Camaro than a Ford Mustang. While that story holds true in October, let’s not over-analyze the situation. Camaros are the new thang, the most stylin’ car on the block. Besides, anybody who really, really, really wanted a new Camaro had to go without for a large part of this millennium. And then, when General Motors finally released unto us a new Camaro, it was no rehashed F-body but a world-class GT. Moreover, even the V6-engined Camaro is fast.

So don’t act so surprised that Ford can’t quite keep up in the fall of ’09. Discounting the fact that the Camaro expanded its lead over the Mustang this month; ignoring the increase in Challenger sales this month and the decrease in Mustang sales – the ‘Stang is fine. Right? Yes, the Mustang always wins….. right? 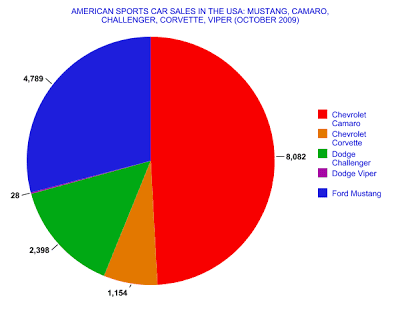