Once the standard of the world, Cadillac is now in a fight to be considered a worthy alternative to the best of Germany. When it comes to small-to-midsize sports sedans, the BMW 3-series reigns supreme. Audi’s A4 and Mercedes-Benz’ C-class are major players, and Japan has gotten in on the act, as well, with the Infiniti G35 and Lexus IS.

Parts of the w

orld see a Cadillacized Saab called the BLS. It’s a front-wheel drive sedan or wagon; smaller than any American Cadillac. For those of us in North America, the Escalade-SRX-DTS-XLR-STS train ends at the CTS. Up until now, the CTS has been seen only as a 4-door sedan. Its progenitors include the nightmarish Cimarron, the decent-but-dull Catera, and the first-generation CTS.

CTS 1 brought some credibility to Cadillac; the v performance edition even more so. Although not a very small car, this Cadillac competes ably with the small sedans previously mentioned on price and specification, whilst in many cases providing more occupant space.

At one time not so long ago, the minds of young men (such as myself) linked Cadillac with Lincoln as cars for the rich retirees in Boca Raton. To be a Cadillac executive and understand that your cars had become indelibly connected with Floridian communities for the seniors among us – well, that just had to hurt.

The CTS brought change. First generation styling was not to my liking; many other critics used much harsher language. But the CTS was no Catera. There was life inside this car, a little bit of joie de vivre and je ne sais quoi. To be honest, I hated the way it looked. The CTS-v had instant pull and satisfaction, however, with its Corvette engine and BMW M5-baiting performance.

CTS version 2.0 is upon us, and while at GM’s Milford Proving Grounds – at their expense – the CTS was one vehicle that truly excited me. Clearly this vehicle is not a Cadillac to be linked with the Boca Raton rich, if I, the representer of a new generation of first-time car buyers, am excited by its potential.

A rear-wheel drive, 6-speed automatic-transmission CTS with direct injection will propel its 3,874 pounds with 304 horsepower. Rough idling apart, this engine is a monster. Its revtastic nature marries well the quick shifting transmission. The 6-speed is abrupt; firm; and immediate, but never – in no wise – in a negative way. To put it simply, forward progress is enjoyable and effortless; the CTS being fun to provoke, knowing that it will always respond and never flounder in gear confusion. 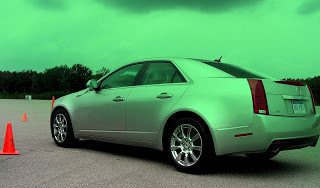 What about the twisties? Our ride & handling loop was furnished with some low-speed cornering opportunities as well as a couple higher-speed sweepers and plenty of nasty bumps, yumps, and holes mid-turn, as well. It was a challenging course for any car. Some failed to generate high ratings on my internal thrill-o-meter, others thrilled but did not succeed in offering an experience. Having driven four General Motors’ vehicles in the morning and ten in the afternoon, my five mile journey in the CTS has to rank in the top two drives of the day, right behind the Chevrolet Corvette.

Consider that this is the smallest car in Cadillac’s North American fleet and you’ll think the CTS is small. It’s not – but it does drive small. The tighter the corner, the more nimble the car felt. Stability on the enduring sweepers, one of which would throw the odd bump in for good measure, felt autobahn-inspired.

Cadillac’s are not renowned for direct and accurate steering, but the CTS exemplified how fine steering could – if necessary – hide other transgressions. No, I can’t say it was particularly feelsome, but in 2007, a communicative wheel is hard to find. There was never a need for readjusting the line in a corner; not because of 17″ wheel impacts or lack of driver confidence or an inability to retain speed. Direct the CTS where you want to go, and it’ll take you there. Sure, more communication wouldn’t go unwanted, but the CTS is a driver’s car nevertheless.

Letdowns? Or shall we say letdown, singular? Interior design is pleasant in apperance, but disappointing to touch. It causes genuine consternation in my automotive heart, knowing that the CTS deserves high praise and terrific recognition in almost every area, yet finding that it lets me down in the one area where the driver spends all his/her time.

Cadillac’s CTS has a 3.6L V6 that starts at by achieving 263bhp on the dyno. Selecting that engine option would net you a basic savings of $2,300 USD, but you’d be losing a few features as well. If you want full-bore performance and luxury, a $35,290 Cadillac CTS is a decent bet. Waiting for the CTS-v in its second iteration wouldn’t be perceived as such a bad idea either.