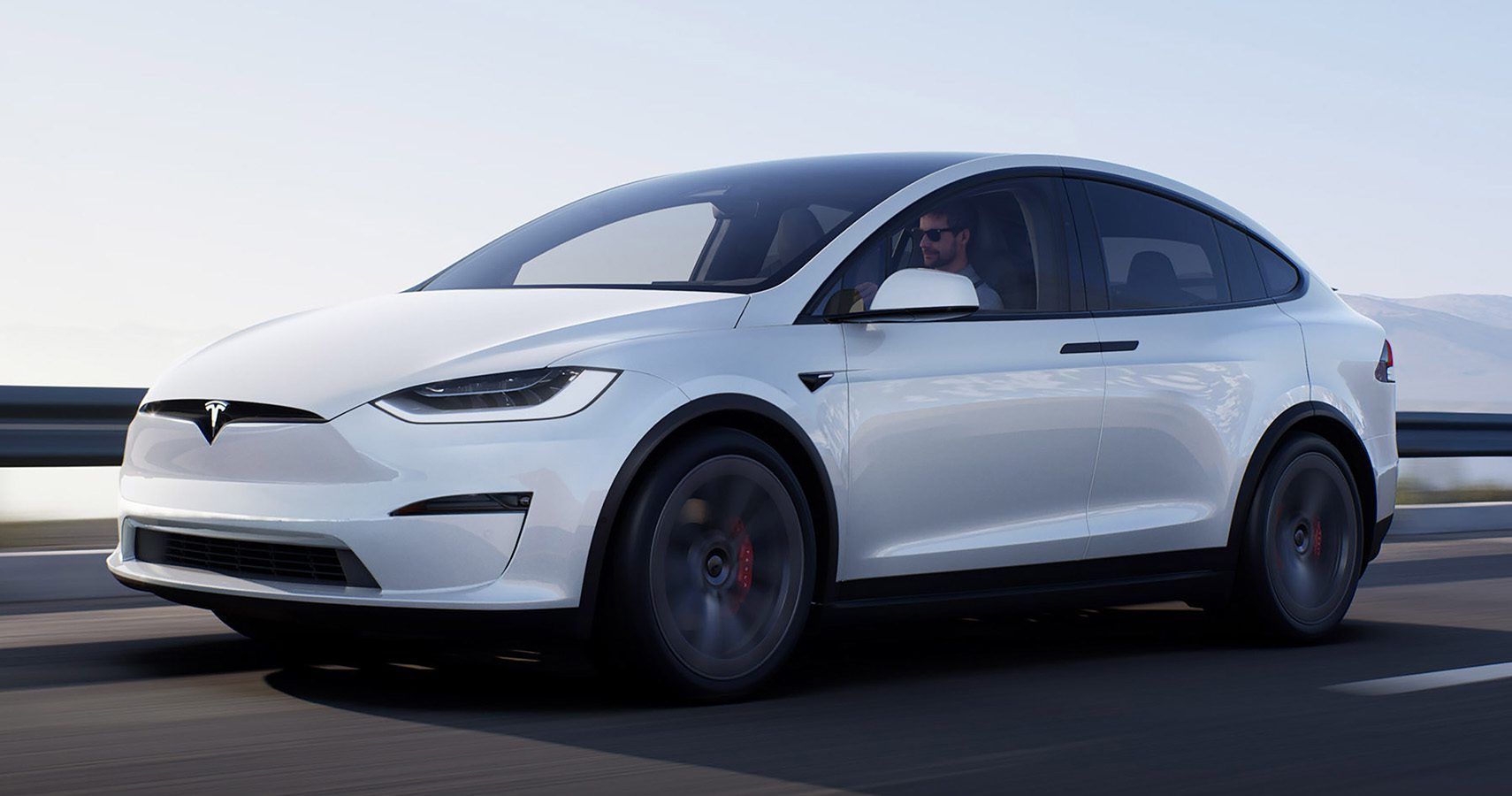 [RANKED] THE BEST ELECTRIC SUVS FOR 2021

No one doubts the future of the automotive industry lies in electrification. A few issues will have to be resolved first, such as establishing sufficient charging points and guaranteeing electricity supply, but the evolution of the car has a marked path. And it starts with a few electric SUVs.

Electric vehicles are becoming more practical and efficient. And although we might think that an SUV-type body is the antithesis of efficiency, the advances in battery and charging technology give fully electric vehicles even longer ranges of autonomy. This allows different SUVs and crossovers of all trim levels and sizes to be viable family vehicles for everyday life, and even for long trips.

In addition, considering that the SUV segment is perhaps the most popular now, and the trend does not seem to change anytime soon, it’s almost a given that electric SUVs are going to dominate the automotive market globally in a few years. Therefore major car manufacturers are tapping into this trend to incorporate EVs into their lineups.

With this in mind, we bring you our picks of the best SUVs you can buy right now. Regardless of what critics say about the Jaguar I-PACE, one thing is certain; This fully electric car is indeed a true Jaguar. It’s a vehicle that will arouse familiar emotions among the enthusiasts of the British brand. This results from its near-perfect weight distribution plus the power and torque delivery of its electric motors that give it a behavior worthy of a Jaguar.

The interior of the Jaguar I-Pace can be described as a showcase of technology and refinement, although with details that can be improved, but it is still a delight to be on board. The design is clean and with several unconventional shapes that tell us how special this vehicle is.

Being an electric vehicle, the delivery of all the torque is practically instantaneous when you floor the accelerator. So, despite weighing 4,702 pounds, it can go from 0 to 60 mph in just 4.8 seconds. Its maximum speed is limited to 124 mph.

The Jaguar I-Pace offers an EV 400 configuration, so it produces 400 PS, which translates to 394 horsepower and 512 lb-ft of torque. This power is generated between its two electric motors, one per axle, thanks to its 90kWh battery and a range of 292 miles. 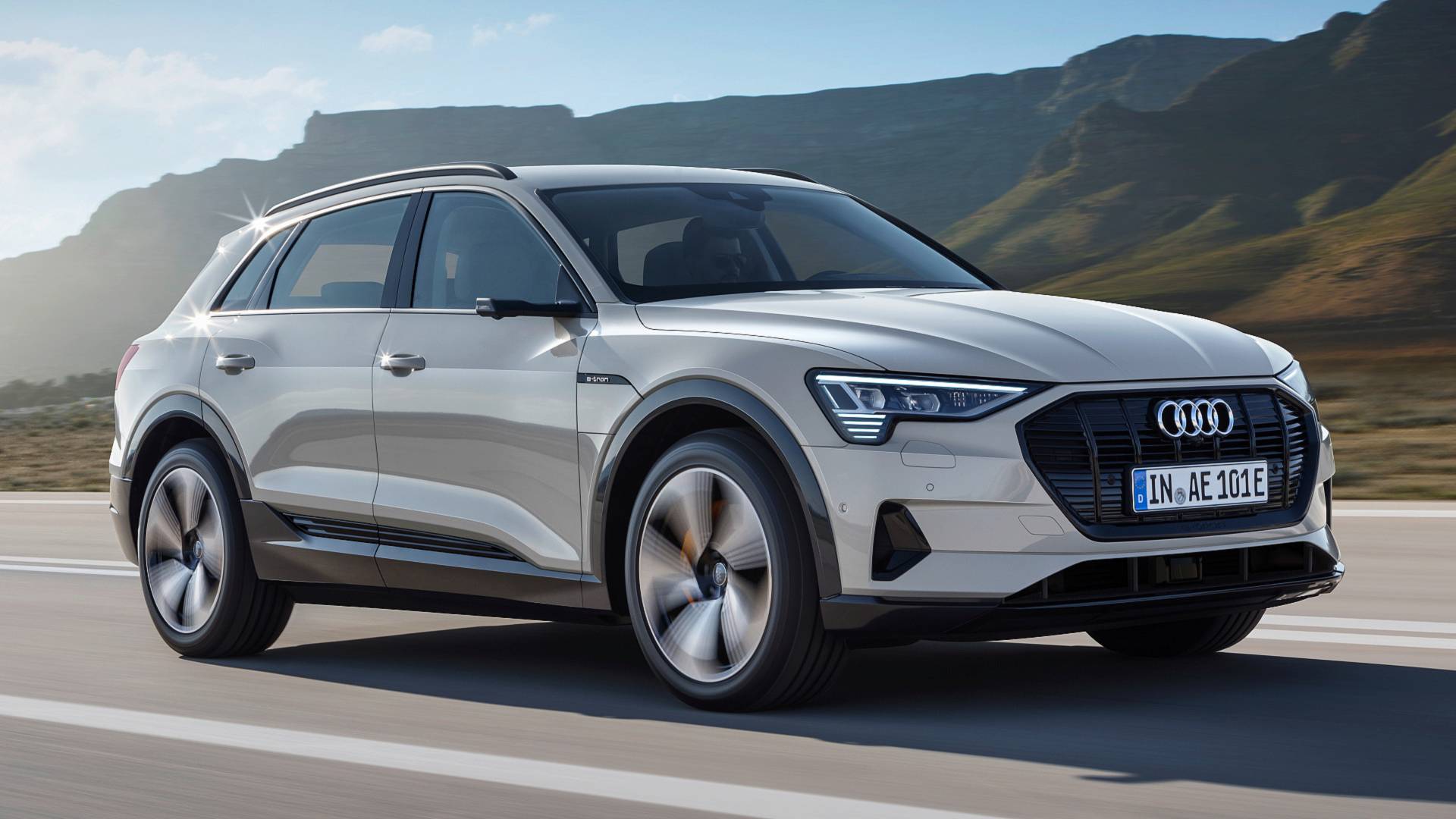 The first generation Audi e-tron was introduced in 2018 and became a milestone in Audi’s new lineup of fully electric cars. The e-tron can accommodate five occupants and offers an electric range between 218 and 277 miles depending on the version.

The price range of the Audi e-tron is very similar to that seen in the Jaguar I-PACE and the more basic Tesla Model X, both of which aspire to rival the e-tron alongside other SUVs in its class such as the Mercedes Benz EQC.

The design parallels to other Audi models like the A7 are obvious. Its grille is the star of the front end, large and with occluded slats, in search of better aerodynamic performance. The headlights are based on Matrix Laser technology, using a combination of LEDs and OLEDs for their light signature. It certainly seems that OLED is the next big leap in lighting after laser and Audi wants to continue to pioneer it.

If we can highlight something about the e-tron it is its speed, but not necessarily with a sports car feel, or with dazzling performance despite producing 402 horsepower and 490 lb-ft of torque and going from 0-60 mph in only 5.5 seconds.

Tesla’s biggest crossover now comes in two versions and the ability to produce up to 1,020 horsepower and a range of 360 miles.

As far as exterior design, Tesla changed practically nothing and instead focused on increasing the proportions of the fascia to make it look smoother. They also changed the design of the wheels and tweaked the shapes of the rear end.

What really changes is the interior with a layout like that of the Model S, including the steering wheel that is now rectangular and reminds us of the controls of an airplane or a racing car. Also, the central 17“screen now has a horizontal configuration. Also, Tesla removed both the turn signal and gear stalks completely and replaced them with a touchscreens.

The two versions of the Model X are: Long Range and Plaid. The first focuses on autonomy with its two engines that together push out 670 horsepower and an autonomy of up to 360 miles. It goes from 0 to 60 mph in 3.9 seconds, reaching a top speed of 155 mph. 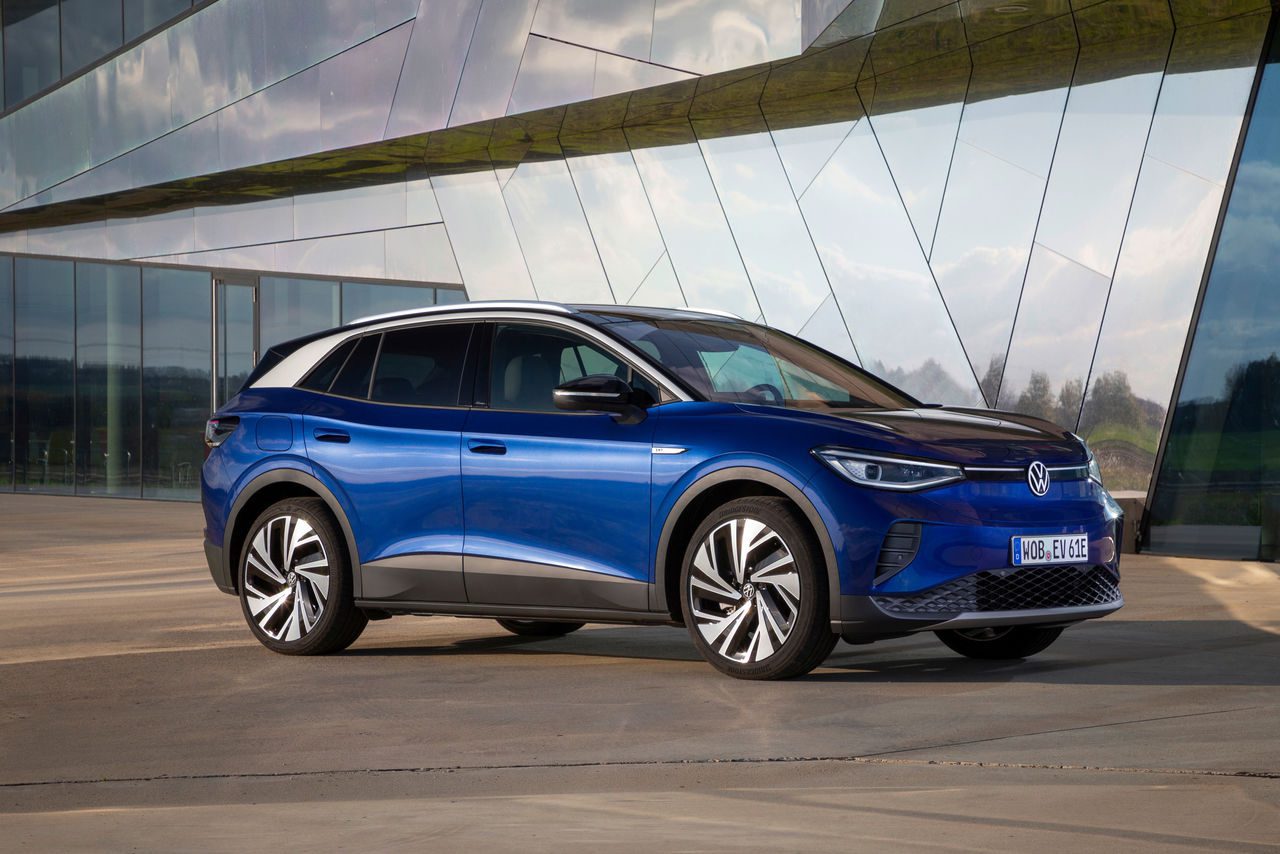 The Volkswagen ID.4 2021 is the first electric compact SUV of the German brand and their strategy called ‘Way to Zero’ with which Volkswagen aims to be a neutral company in CO2 emissions by 2050.

Minimalism and digitization define the interior of the ID.4. All the information and controls are centered on its two screens, one for the control panel and the other for the multimedia system, which responds by touch, gesture, or voice. The infotainment screen can be 10 or 12 inches, while the instrumentation is always 5.3 inches.

Mechanically the Volkswagen ID.4 1st Edition will have the same power base in both Europe and North America, a single rear axle-mounted electric motor delivering 201 horsepower and 229 lb-ft of torque, which will be powered by a package of 77 kWh battery to help the car achieve a maximum autonomy of 323 miles under the WLTP cycle, with an acceleration from 0 to 60 mph in 7.4 seconds and a top speed of 100 mph.

The ID.4 joins a barely nascent segment, that of electric SUVs and which currently has only a handful of models that only include the Tesla Model X and Y, the Ford Mustang Mach-E to name a few. 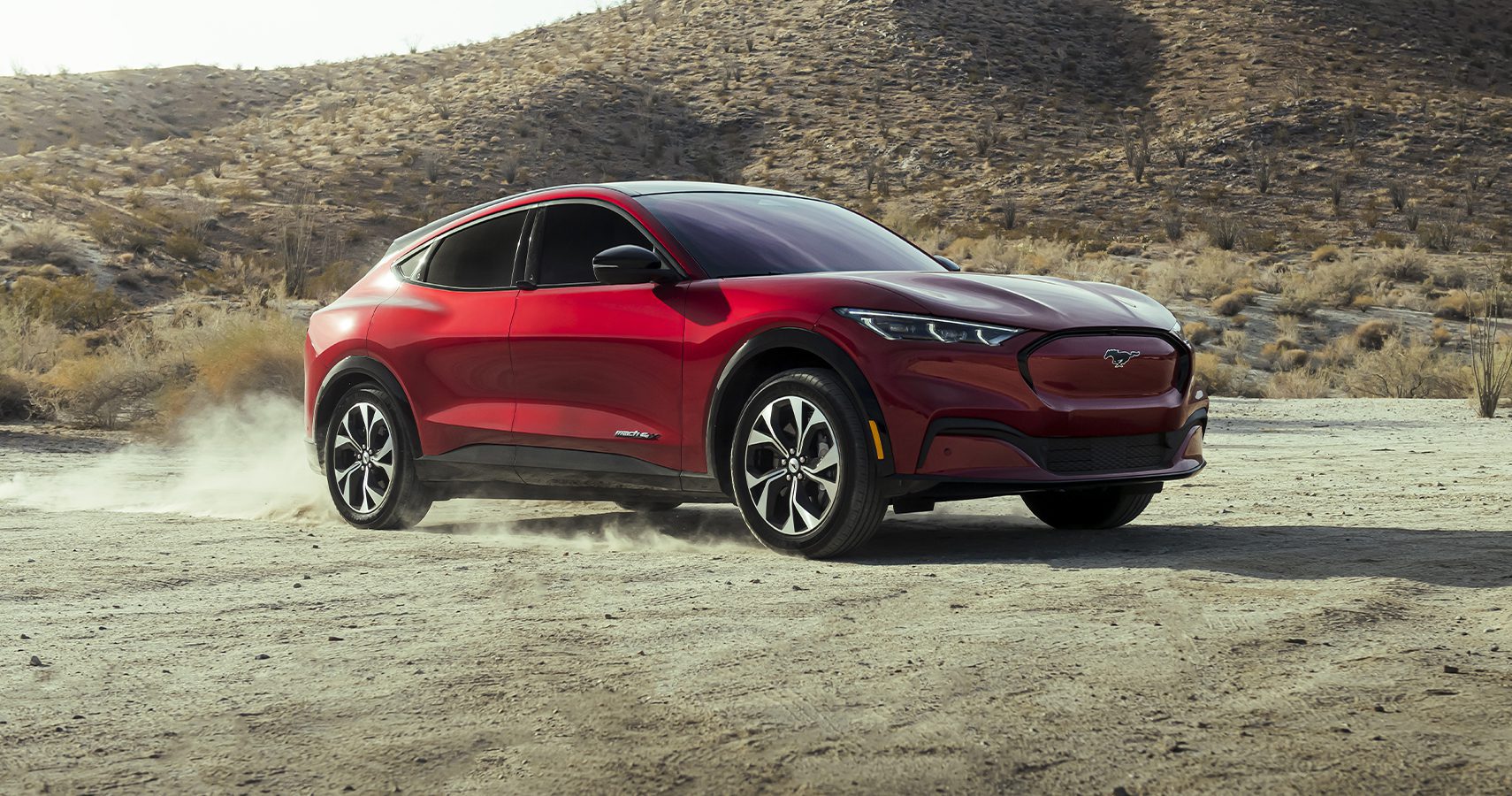 When the first Ford Mustang Mach was introduced in 1969, it quickly became a legend and icon of motorsport around the world. It represented freedom, progress, performance, and a bit of rebelliousness.

56 years later, Ford Mustang Mach returned to continue the legacy from an innovative proposition: the first high-performance Ford electric SUV, in extended-range all-wheel-drive configurations, ranges from 332 to 459 horsepower and from 417 to 612 lb-ft of torque.

It will equip different battery options: standard and extended range with rear- or all-wheel drive driven by permanent magnet motors. The all-electric SUV will be produced in Mexico.

The 2021 Mustang Mach-E is heavily inspired by the Ford Mustang, with highlights such as its fully enclosed front grille with the galloping horse logo, heavily marked rear wheel arches, razor-sharp LED headlights, or rear headlight box. with three vertical light stripes crossed by a horizontal line.

The rest of the elements, such as the elongated hood, the very pronounced wheel arches, the shape of the front and rear bumpers, the self-designed wheels, or the marked slope of the roof give it that SUV looks that buyers in North America like so much.

Although it’s not the first electric in the brand’s history, it’s the first to be produced on a large scale and the one in charge of giving way to a line of electrical products that will soon show up in dealerships around the world.

On the outside, there are very characteristic details such as the contrasting black grille, the LED headlights with blue contrasts, the rims with a very peculiar design, and LED taillight that runs from side to side across the body. Its interior simply follows the brand’s standards of quality and refinement to the letter.

The new EQC carries the brand’s famous MBUX system, and it’s one of the first models to adopt the navigation system with augmented reality that the brand boasts so much.

The magic of the Mercedes-Benz EQC comes from two electric motors, one on each axis, which can generate 408 hp and 564 lb-ft of torque, and draw their power from an 80 kWh battery, capable of delivering over 400 km of autonomy if its regenerative braking capacity is fully exploited with efficient driving.

The Mercedes-Benz EQC fulfills both in the city and on the road thanks to its performance, comfort, assistance, and details such as the 360º vision that will make daily use very easy. 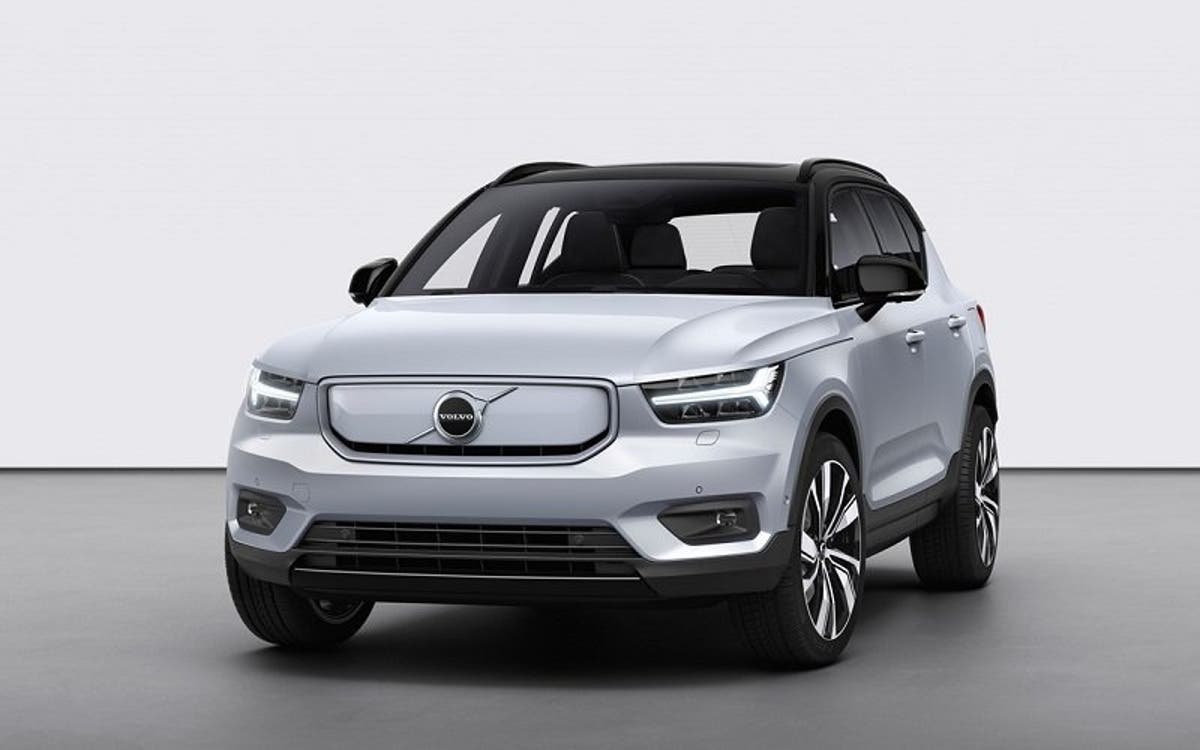 For 2021 Volvo introduced the XC40 Recharge P8, the 100% electric variant of the SUV, and its first zero-emission model.

The Volvo XC40 Recharge P8 AWD is the first configuration available and it’s based on the Compact Modular Architecture (CMA) developed jointly with Geely Group. It mounts a 150 kW electric motor for each axle developing 408 horsepower and maximum combined torque of 486 lb-ft.

The 78 kWh battery, which provides a range of over 248 miles in WLTP cycle, can be charged to 80% of its capacity of 40 minutes by a fast-charging system at 150 kW (the integrated charger for the wallboxes is 11 kW).

The battery is protected by a safety cage embedded in the central part of the body structure. The fact that it´s placed on the floor of the vehicle lowers its center of gravity and therefore improves roll-over protection.

In terms of technology the XC40 Recharge P8 has a new Android infotainment system fully integrated with Volvo On Call, the company’s connected digital services platform.

Updates to the Volvo XC40 Recharge will be made remotely (Over The Air), Tesla style, from whom they also adopt the term ‘frunk’ to refer to the front trunk where the thermal thrusters are traditionally housed.