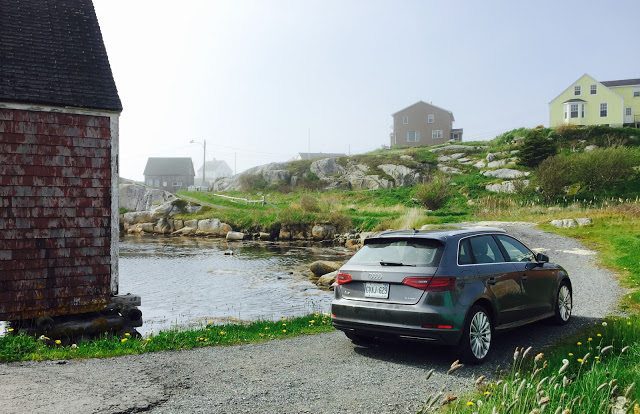 In between yesterday and tomorrow is today.

Today, we have hybrids.

And in between today and tomorrow, whenever that is, resides the plug-in hybrid.

Granted, buyers in search of tomorrow haven’t been as numerous as many industry insiders anticipated. U.S. sales of Chevrolet’s affordable first-generation Volt, for example, peaked at only 23,461 units in 2012 and by 2015 had fallen by more than a third.

But the idea makes a lot of sense. Having plugged in the 2016 Audi A3 Sportback e-tron overnight, I travelled from GCBC Towers in Eastern Passage, Nova Scotia, to the downtown core of the capital, Halifax, on electricity alone.

Once the electric range dried up, the A3 e-tron just kept on trucking as a conventional hybrid, charging up the battery with its powerful 1.4L turbocharged gas engine.

Yes, the idea makes a lot of sense. And in the real world, the A3 e-tron works well in practice, as well. So what’s the problem?

WHAT IS IT?
Canadians can buy an Audi A3 sedan with one of two engines, a high-powered Audi S3 sedan, and a two-door Audi A3 Cabriolet. But after the far less popular A3 that first came to North America in hatchback guise only, the new Audi A3 Sportback is sold in North America only as an e-tron. Think of the A3 e-tron as Audi’s version of the Chevrolet Volt, a plug-in hybrid that could theoretically run forever without ever being plugged in and charged through an outlet or as a pure electric car if every trip you take is less than 25 kilometres and you have time in between each trip to charge up through an outlet. 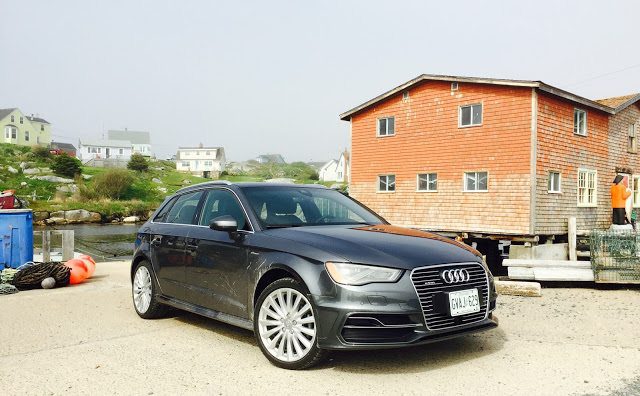 Canadian pricing for the regular 2016 Audi A3 starts at $33,795. The Sportback e-tron, however, commands a hefty $7600 premium. Progressiv trim adds $700 to the base price of the slightly more efficient A3 e-tron ultra. Our specific test car was an A3 Sportback e-tron Technik, priced from $46,795 before Audi’s PR department slathered on spectacular Daytona Grey Metallic paint ($890) and added an $1100 Sport Package (which includes the stunning 18-inch Turbine wheels and very comfortable sport seats) and a $1400 Technology Package (active lane assist, adaptive cruse, Audi front pre-sense).

HOW BIG IS IT?
Outside, the 2016 Audi A3 Sportback is very much sized like the Volkswagen Golf with which it shares a platform. The A3’s wheelbase is three-tenths of an inch shorter than the Golf’s but the A3 e-tron is nearly two inches longer than the last Mk7 Golf 1.8 TSI we tested. The Audi is half an inch narrower and nearly an inch lower.

DOES IT WORK?
As a variant of the Audi A3, the 2016 A3 Sportback e-tron has plenty going for it. Outside and in, the A3 is a classy piece of kit, particularly on these 18-inch wheels and with this deep and lustrous grey paint. This is a factor in forming an A3 e-tron impression, because you’re impressed before you start the car up.

But then after pressing the starter button, you’re left waiting for a moment while the car readies itself. Shifting into Drive before the A3 e-tron is ready is a meaningless shift. This isn’t the case if the car was running recently, but after sitting, the post-start pause is aggravating.

Then, with a fully charged A3 e-tron prepared for the journey, you’re underway, riding a wave of electric torque that can in no wise be compared with the way a conventional ICE produces acceleration. The silent smoothness is unusual in all the right ways.

Unfortunately, the electric range maxed out at 26.7 kilometres while the A3 e-tron was in our care, enough for a one-way trip into the city. Five or six years ago, that figure would have been fascinating. But there are much less expensive cars that will allow you to travel into the city and back. And then back into the city again.

The A3 e-tron is fortunately hooked up to Volkswagen’s dual-clutch 6-speed gearbox, and the whole powertrain marriage is a happy one. The A3 e-tron is quick off the line and punchy in the mid-range. At the same time, the plentiful GTI-like power figures are let down by excessive weight and, consequently, somewhat sloppy handling. With four adults and a toddler aboard we headed down twisty Prospect Road toward famed Peggy’s Cove and quickly discovered that, while sufficiently quick, the A3 e-tron’s 441-pound penalty (compared with the front-wheel-drive A3 1.8T sedan) clearly dulls the platform’s typical responsiveness.

It’s in the city where the Audi A3 e-tron shines, however, where its powertrain makes the most sense and its solid structure and tidy dimensions are welcome in an urban environment.

Regardless, the A3 e-tron is a mixed bag of good and bad. The four-rings on the grille unlock with the twist of a knob to slide over in order to reveal the charging port, but everything about the operation feels bizarrely cheap and breakable.

At the same time, the A3’s screen rises up out of the dash with all the refined techno-wizardry you expect from an Audi.

The powertrain shuffles between modes imperceptibly, but at the end of the week we essentially consumed 5 litres of premium fuel per 100 kilometers, plus two overnight charges. (At worst, here in Nova Scotia, the cost of those charges work out to about $1.30 each.) We did 4.1 L/100km in a 2016 Toyota Prius in May.

The Audi A3 e-tron is no Prius, that’s for sure. It’s far more dynamically appealing, far more engaging, and infinitely more comfortable. But the A3 is not nearly as spacious, not as efficient, and far more costly, as well.

IS ANYONE BUYING IT?
Audi doesn’t issue a breakdown of A3 sales figures in any way, whether by A3/S3 or bodystyle or fuel type. We know that the latest A3 range is far more successful than the first A3 Audi brought to North America. In the United States, Audi A3 sales in calendar year 2015 were on par with the total number of A3s sold in America between 2007 and 2013, a seven-year span. In Canada, Audi sold 3788 A3s in 2015, more than double the number of A3s sold in the previous-generation’s best ever year. 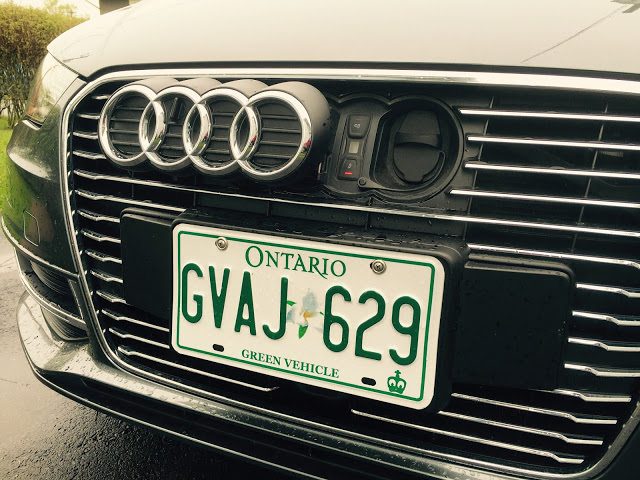 According to registration figures provided by our favourite electric car source, Matthew Klippenstein, Audi Canada sold 133 A3 e-trons between December and April, a period during which Audi Canada reported 1458 total A3 sales. HybridCars.com says Audi USA sold 1589 A3s e-trons in the first five months of 2016, 12% of the overall A3’s 13,413-unit total.

It’s not that an Audi A3 e-tron doesn’t feel like a premium product, but the luxury content levels and space aren’t there to justify a significant plug-in price premium without two traditional Audi virtues: Quattro all-wheel-drive and a technical advantage. But the 2016 Audi A3 e-tron is a compact, front-wheel-drive, hatchback with 70% less pure electric range than the 2016 Chevrolet Volt.

Not that much technology, very little advancement. The A3 e-tron is technically behind the curve. Sure, the Chevrolet Volt lacks a premium badge and a premium appearance, but if you take your green car cred seriously, you must give the second-generation Volt a look. And if the green car aspect of the equation isn’t important to you, just go ahead and get a regular Audi A3. Or at this price point, an Audi S3. That car is sublime.

HOW MUCH SHOULD I PAY?
But let’s say you insist on purchasing or leasing an Audi A3 e-tron, perhaps helped out by rebates in the province in which you currently reside. (No such rebates exist here in Nova Scotia.) In that case, we’ll acknowledge that the top-trim Technik’s navigation system, Bang & Olufsen sound system, backup camera, and adaptive lighting seem worth the added cost.

Skip the wheel, paint, and tech package upgrades and the 2016 Audi A3 Sportback e-tron Technik is a pill that can be swallowed at $46,795.

WHAT’S THE VERDICT?
If the 2016 Audi A3 e-tron plug-in hybrid made a technological case for itself, perhaps we’d be willing to overlook some of the car’s dynamic flaws: its indecisive turn-in, slow startup response, and snug rear quarters. Indeed, if the 2016 Audi A3 e-tron was as sharp a handler as regular A3s, if startup wasn’t stupidly slow, and if it didn’t sacrifice space because of the extra hardware, we would forgive the fact that it’s not a leader among plug-in hybrids.

But the Audi A3 e-tron isn’t a technical powerhouse – strike one – and it’s not as good of an Audi as the regular A3 – strike two – and less costly cars do more for less. Strike three.

Timothy Cain is the founder of GoodCarBadCar.net, which obsesses over the free and frequent publication of U.S. and Canadian auto sales figures. Follow on Twitter @goodcarbadcar and on Facebook. The A3 e-tron was supplied by Audi Canada’s press office.