BACK IN TIME – VOLKSWAGEN GOLF – DRIVEN

Them were the good ol’ days. Back when Golf’s were still Golf’s, before they were Rabbit’s here in

North America. Introduced when Volkswagen was confident, when Europe hailed the Golf as King for its true structural integrity and quality interior, the Golf in its fourth generation was an armed competitor. The Golf is a family car in much of Europe, and now – er, then – families could have a car that made them feel good.

That was the Golf MK IV, in proper lingo. Much larger in every dimension from the original late 70’s/early 80’s Golf/Rabbit, and consequently much heavier, the MK IV Golf drew plenty of criticism for its soggy driving dynamics. Roll, understeer, and slow turn in caused by its front-heaviness. Criticism was especially harsh for the GTI version and the added weight of its V6 engine. The fourth-gen Golf escaped the criticism in the cabin. Close the doors and block out all the noise regarding its on-the-road demeanor, and savour the feeling of a car that feels more expensive than it truly is.

Cars that feel more expensive than the MSRP suggests are generally successful. And the Golf was successful, especially outside of North America. In the United States it is the sedan version of the Golf that provides the sales volume. But even the Jetta wasn’t enough to stem the out-migration from VW dealers in the latter years of their North American showroom presence. Those latter years happened to coincide with the early years of Golf MK V in Europe. While they were enjoying the delectable new GTI, the largest automotive market in the world was left with an old car. And no matter how good that interior was, an old car is an old car….. is an old car.

So, you’ve been seeing 5th generation Rabbits for over a year now. In some places, such as Canada, the old Golf and Jetta continue as ‘City’ models. Priced low and equipped solely with gas engines, Volkswagen obviously wants to get more life out of what was a once-massive investment in new product. Back in 1998.

Having driven numerous Gabbit’s of different generations, you’d think I would have driven what is now called the Volkswagen City Golf. But I’ve never had the privilege of rowing through the gears in an MK IV with a 115 bhp gasoline engine. Different 1.9 litre diesels and a 1.8 turbo have come my way, but never the droning lifeless 2.0L Volkswagen four-cylinder. Naturally, a horsepower junkie is able to enjoy the smooth torque plateau offered by Volkswagen’s 1.8T. Equipped as such, the GTI put 150 bhp to the front wheels. In later years it would make substantially more horsepower in GTI’s, Audi’s, SEAT’s, and Skoda’s.

It was diesel which always struck a chord with me. Just 90 horsepower, a little smelly still, a touch noisy, but a pleasure to drive. Low-powered cars often succumb to the overarching image of poor man’s car or yield to the idea that no car with so few horses could be fun to drive. Something makes me think it is the Golf TDI’s lack of power that makes it fun to drive. It is similar to the Geo Metro ‘triple’ feeling. 3 cylinders necessitate a give-it-yer-all attitude. It becomes a go-kart experience. Do you drive a kart at 5/10ths for the ten minutes you have in life to drive 10/10ths and not see flashing lights? Of course not. With a three-cylinder Metro (or a smart fortwo) you must drive it like you stole it just to merge onto the highway. Granted, the Golf has an extra 35 bhp compared with the Metro with which I toured the maritime provinces eight years ago. Nigh on triple the torque as well. But it also weighs much more and has a very short travel throttle pedal. So sometimes, giving it some real punch is the best mode of transport. Did I say sometimes? Maybe most of the time.

I’m driving this older Golf TDI, a car that was delivered to its true owner under my watch a number of years ago, for a number of days. It was delivered to me with substantially less than a full tank six days ago and I’ve yet to say anything similar to, “Fill’er up”. It is therefore impossible to determine the precise fuel economy I am achieving with the Golf. Energuide.ca says a Golf like the manual I’m driving would use 5.05 litres of diesel every 100km, on average. Fueleconomy.gov suggests 35mpg in the city and 44mpg on the highway. Where I live, diesel is consistently 5-10 cents cheaper than gasoline. This represents massive savings at the pump, as you could imagine.

The Golf is not a particularly enjoyable car to drive in contrast to a new Civic. Certainly not a pleasure compared with the new Rabbit. It fosters that old school love. Much of humanity has, at one time or another, ridden in or driven a Volkswagen. Usually an old one. Inside numerous MK IV Golf’s and Jetta’s and GTI’s; frequent rides in a ’92 Passat; careening around the mountains of Mexico in a ’70’s Beetle; a German import Golf MK II and multiple other Jetta’s throughout, Volkswagen’s have that smell. No, not diesel. They have that feel. And it ain’t always quality. They have that sound, and it usually doesn’t purr. They have that look, something which continues to be recognizable.

And many consumers have taken a taste. Volkswagen’s engender fierce loyalty or leave bitterness wallowing in the mouth of the former owner. Perhaps not bitterness like a bad strawberry. Perhaps it is the bitterness of a grapefruit. 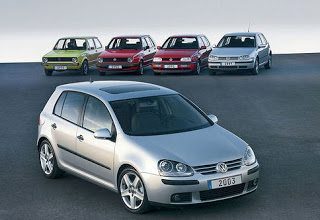