38 HOURS PER YEAR FOR AMERICAN DRIVERS

Ugly truth. I’m not sure who coined that phrase, but in some instances, it is so very very apt. Expensive truth. Hurtful truth. For this piece of news…. they all apply.

On average, the American driver spent 38 hours sitting in traffic during their commute in 2005. That’s the ugly truth. Want some more ugly? 75% of those drivers sit in the car all by themselves. Texas Traffic Institute’s study concluded that Los Angeles-area drivers waste 72 hours per year. Three full days. Atlanta’s drivers spend a whole 600 fewer minutes in traffic than they did 10 years ago, but you can still consider the 60 wasted hours per driver in 2005 really, really bad.

How ’bout the hurtful truth? The truth that hurts the planet, that is. TTI reviewed the data they collected from the 85 largest metropolises in the USA and concluded that an estimated 2.9 billion gallons of fuel was burned by the vehicles that were just sitting in traffic jams. 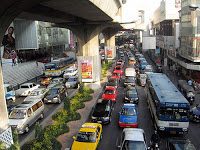 ally shut their engines off while stationary, and sometimes can coast on electric power. So can some newer engines which operate solely with internal combustion. BMW’s, for instance, are commonly high-powered automobiles, but they are also increasingly able to shut off their engines while static.

A simple solution like engine stop/start would be a huge contributor to lowering that $7,975,000,000 figure.