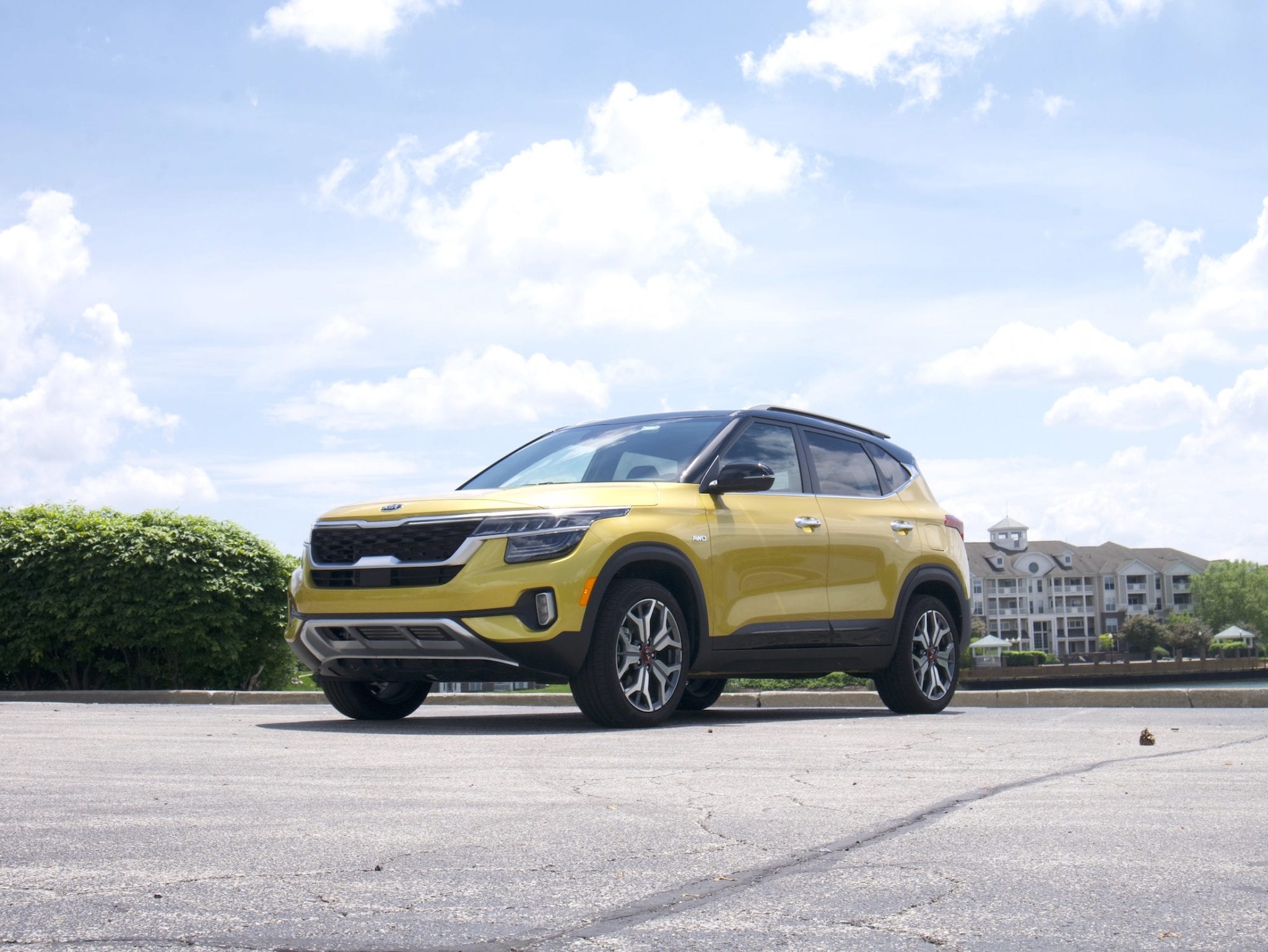 Social Distancing in the New Seltos

Getting Away in the New Kia Seltos

When someone says road trip, people’s minds go in a number of directions. Some think of thrilling GT cars, others thing of old station wagons with mom and dad arguing directions in the front seats. However, if you’re like me, you think of an SUV loaded down and ready to take on about anything. That was my wife and me with the all-new Kia Seltos.

The Kia Seltos is a new addition to the Kia family. It’s a small crossover SUV that competes with vehicles like the Honda HR-V, Chevy Trax, Hyundai Kona, and Subaru Crosstrek. It’s a small and compact crossover that tries to be a viable option for just about everyone and anything. 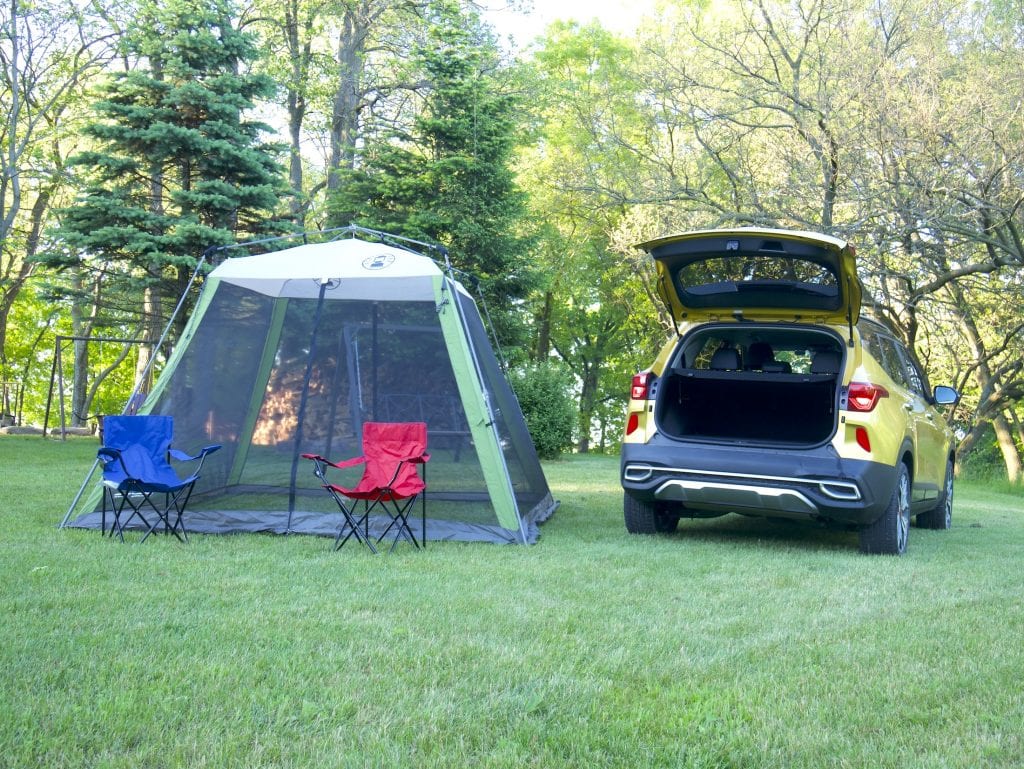 The original plan was simple, find a good campground to go to or head down to the Hoosier National Forest and dry camp for a night or two. Then COVID-19 happened closing down campgrounds and many possibilities of using this vehicle for an epic camping adventure.

So I changed my plans. Rather than take the Seltos south to the Hoosier National Forest, I drove it up to Angola, Indiana, (from Indianapolis) where members of my family own a lake cottage. Since nobody was going to be around, I figured this was the perfect destination for a road trip.

I loaded up the car with about twice as much stuff as I planned to originally bring (a wife and dog come with their own baggage, of course) and headed off.

What Is the Kia Seltos 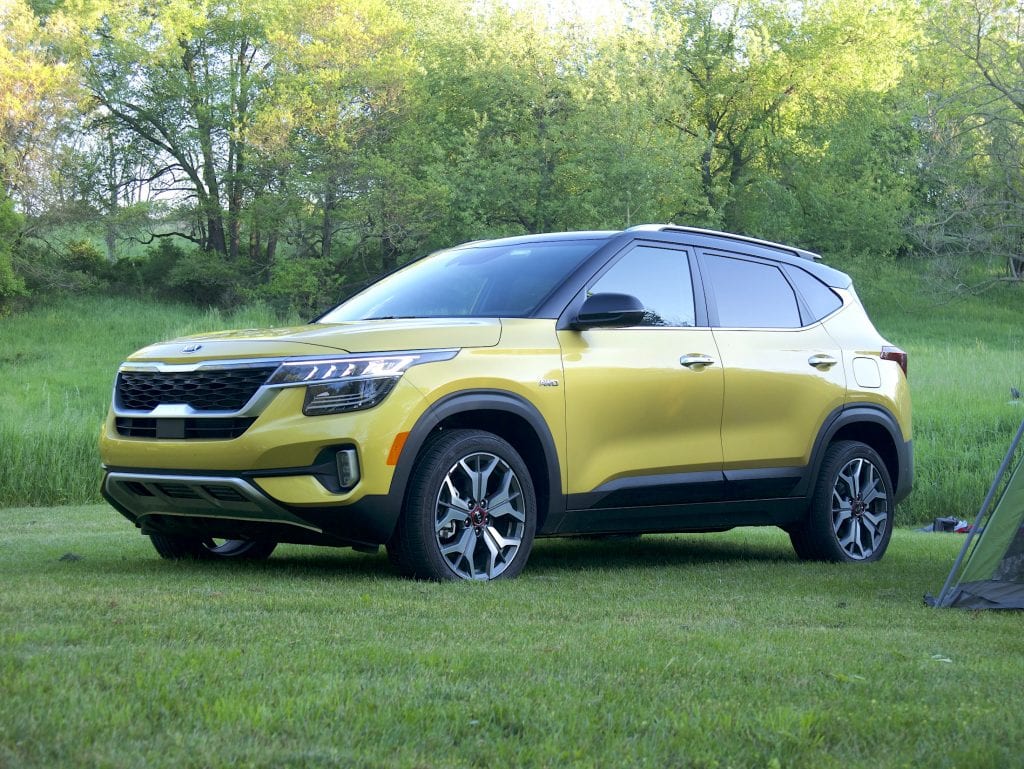 As mentioned above, the Kia Seltos is a new option from Kia. I think of it as the vehicle that takes a lot of what people liked about the Kia Telluride and applies that on a smaller scale. So, it’s a baby Telluride of sorts. It’s a subcompact crossover with good power, a spacious interior, top-quality technology, and good levels of comfort, or so Kia says. My job is to figure out how good it really is. 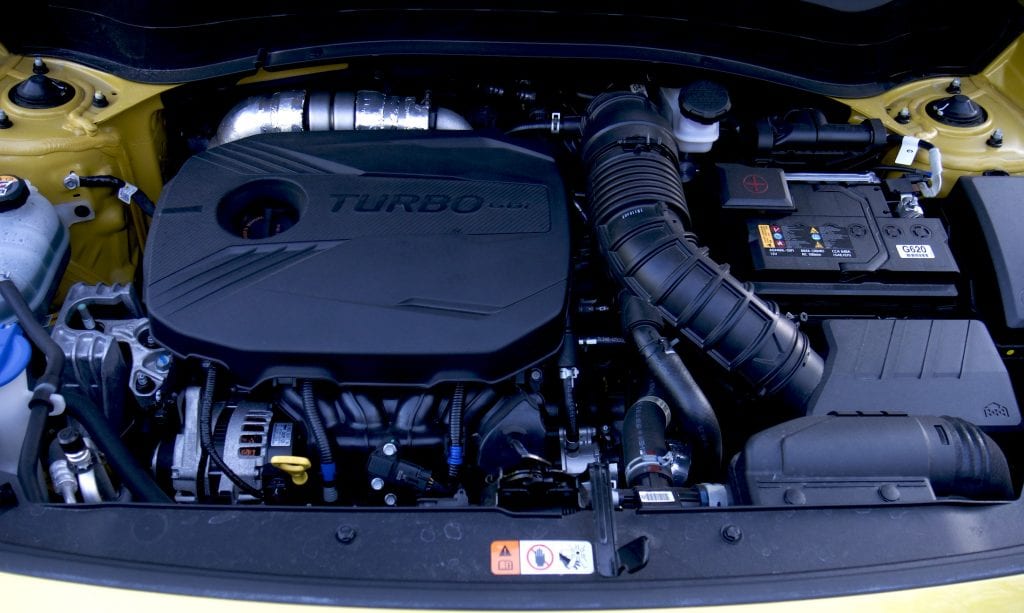 One of the first things I noticed about the Kia Seltos when driving it was that it had a strong engine and could really scoot around if it needed to. The test vehicle I drove was the SX Turbo. That trim offers up a 1.6-liter four-cylinder engine with a seven-speed dual-clutch transmission (automatic).

The engine makes good power at 175 hp and 195 lb-ft of torque. However, the way in which the power is delivered is a little less than desirable. The seven-speed DCT is a little less unrefined than you might think.

That means taking off from a stop isn’t as smooth as you’d like. If you push the pedal to the metal, though, there’s little hesitation before this thing gets to highway speed. Putting your foot down also smooths out the power delivery, but you wouldn’t want to drive like that all the time. The transmission was my biggest gripe about the car.

Good Interior, but Could be Better 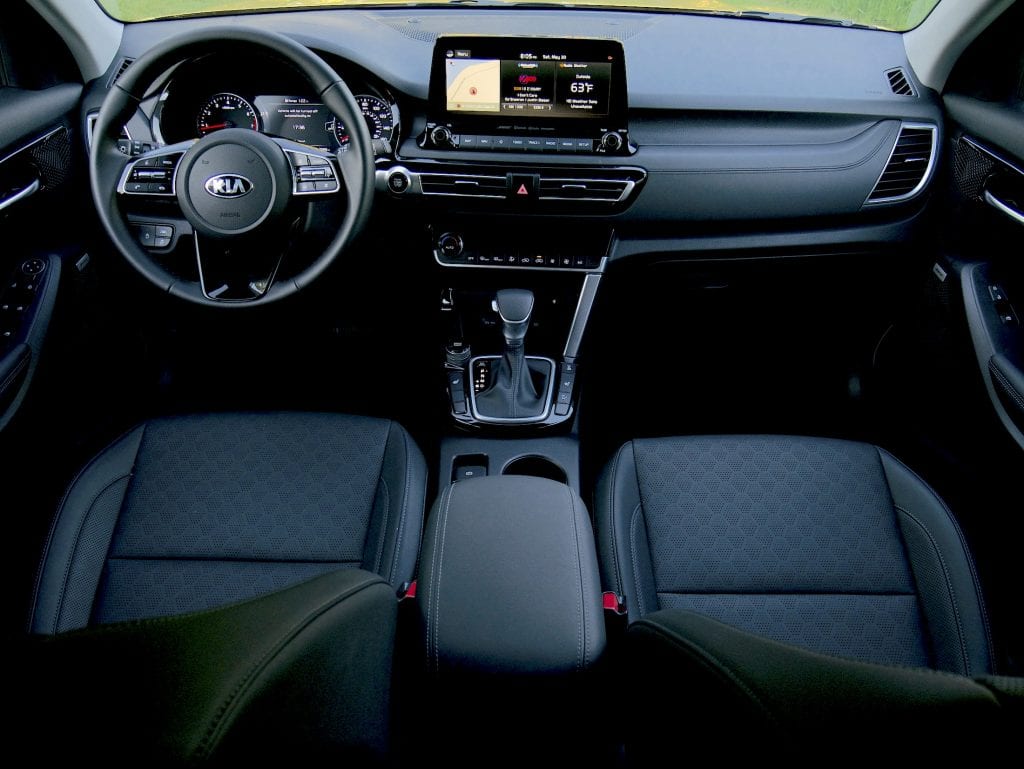 I’m a fan of Kia’s interiors right now. They feel very European. The Kia Seltos is no exception. The interior is very well laid out. Everything is within reach and ergonomically it just works, except for one thing.

I smacked my head multiple times on the A-pillar or the door frame of the car. I don’t know if it was me or just the rake of the windshield and the size of the opening, but getting in and out was not as easy as with other vehicles. I should note, I’m not a huge guy. I’m extremely average at 5 foot 8 inches tall and about 160 pounds.

Endless head knocking aside, once you’re inside the Seltos, there’s plenty of room in the cabin to get comfortable, and it actually feels like one of the bigger models in the segment. 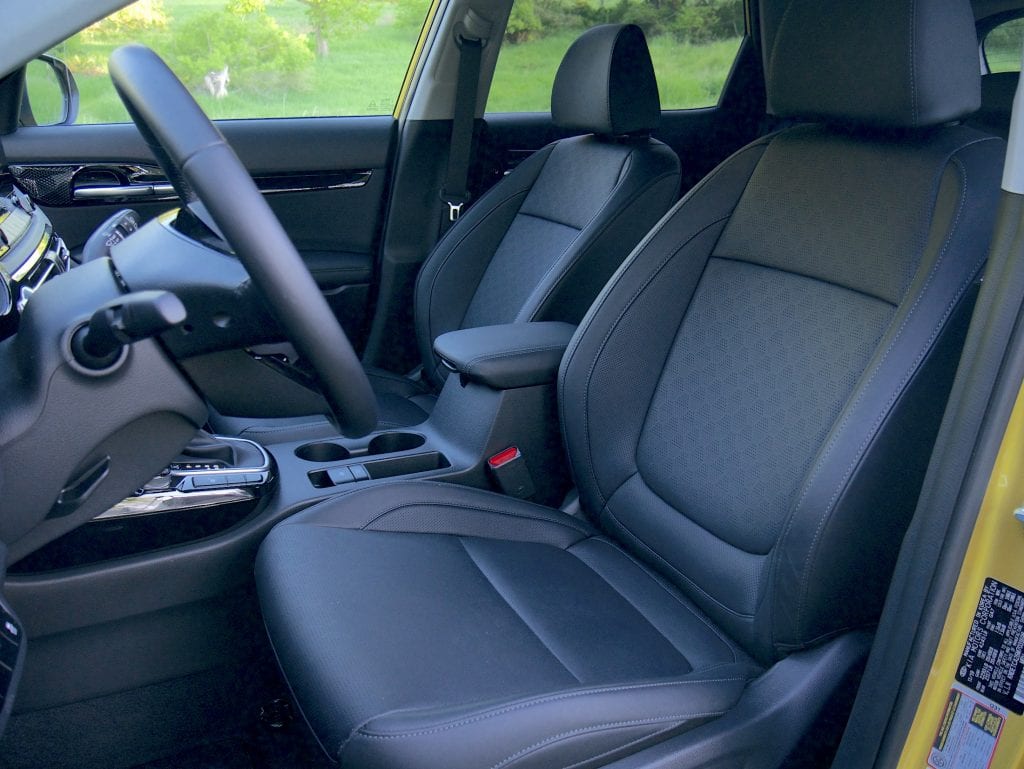 I also have to say that the quality of materials feels very good. The seats were extremely comfortable even after a long road trip, and even my pregnant wife said she like sitting in the vehicle, and few places are comfortable for here right now.

Even the plastics and some of the less-expensive materials in the vehicle felt sturdy and well-placed. The Seltos overall just seemed to be well built on the inside and Kia chose good materials throughout the vehicle, even though some of the styling inside the Seltos—like the patterns on the speakers in the doors is a bit odd with some jagged edges and textures. Otherwise, good job here Kia. 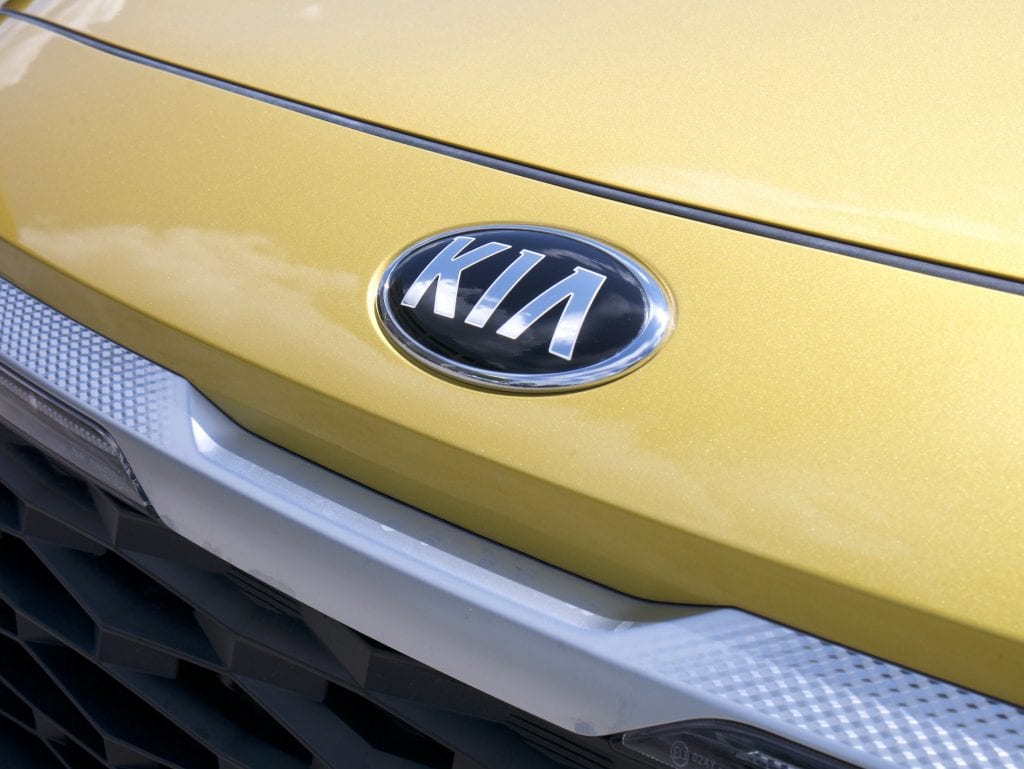 From there you have access to a whole host of options. When you upgrade to the SX Turbo trim level like my tester was, most options are included, they include LED headlights and fog lights, cruise control with stop and go (adaptive), highway driving assist, auto-dimming rearview mirror, safe exit assist. 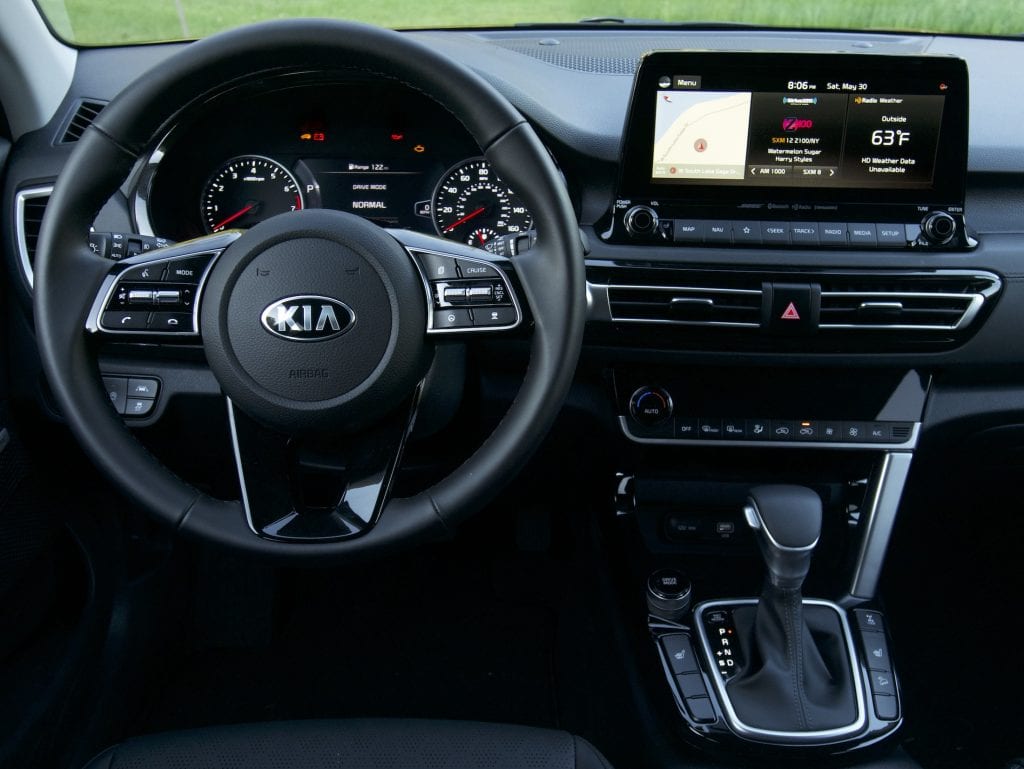 The highway driving assist is a lane-keeping assist and steering assist system that works very well. It takes any stress you have on the highway out of the equation, and the car does a lot of the work itself. You just need to keep guiding the vehicle, but it will let you know when you get too close to a painted line or the edge of the road.

With all of that safety technology and equipment, you might think the Seltos gets top marks from the IIHS and the NHTSA, but the verdict is actually still out on those ratings at this time. Neither organization has posted their ratings for the Seltos at the time of this writing.

How Big Is the Seltos 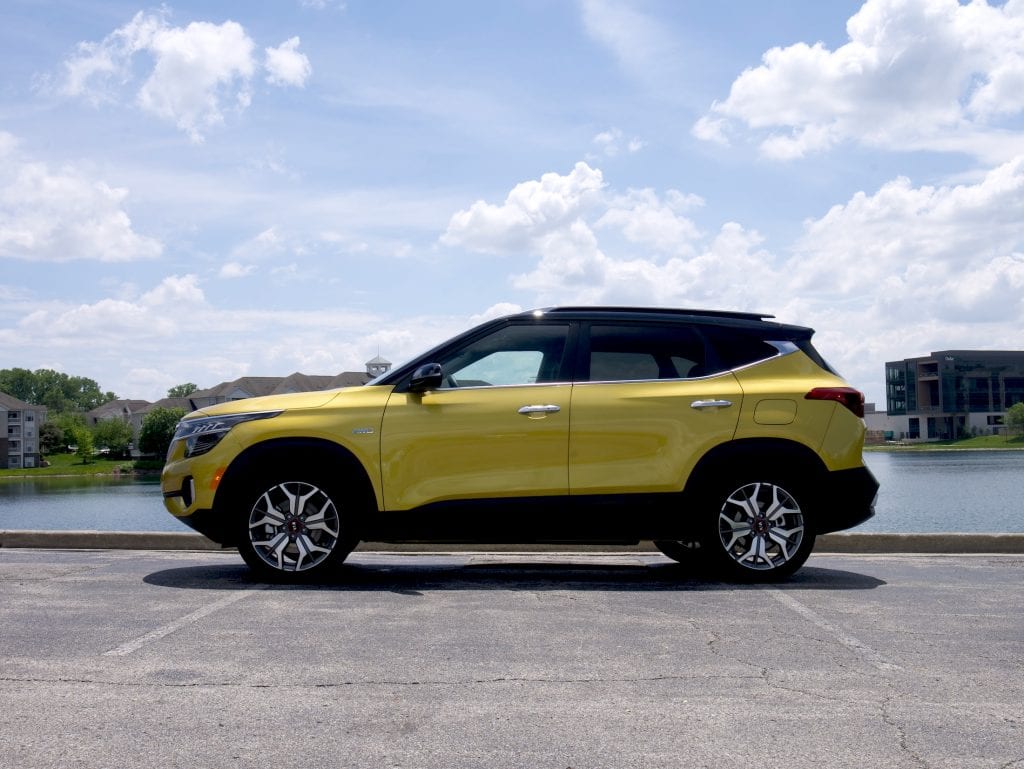 Subcompact vehicles rarely feel roomy, but the Seltos does a good job of making the most of its rather small footprint. The vehicle has an overall length of 172 inches, a width of about 71 inches, and a height of about 64 inches. This is right on par with the competition, although the Seltos is actually a few inches longer than most of its competitors.

As mentioned above, I had issues with ingress and egress, though otherwise, I have few complaints. Its legroom measures 41.4 inches in the front row and 38 inches in the rear. That is close to the competition, but not class-leading.

The cargo area of the vehicle measures 26.6 cubic feet with all of the seats in place. That is actually a few cubic feet larger than the competition, making the Seltos a winner here.

Does the Kia Seltos Work? 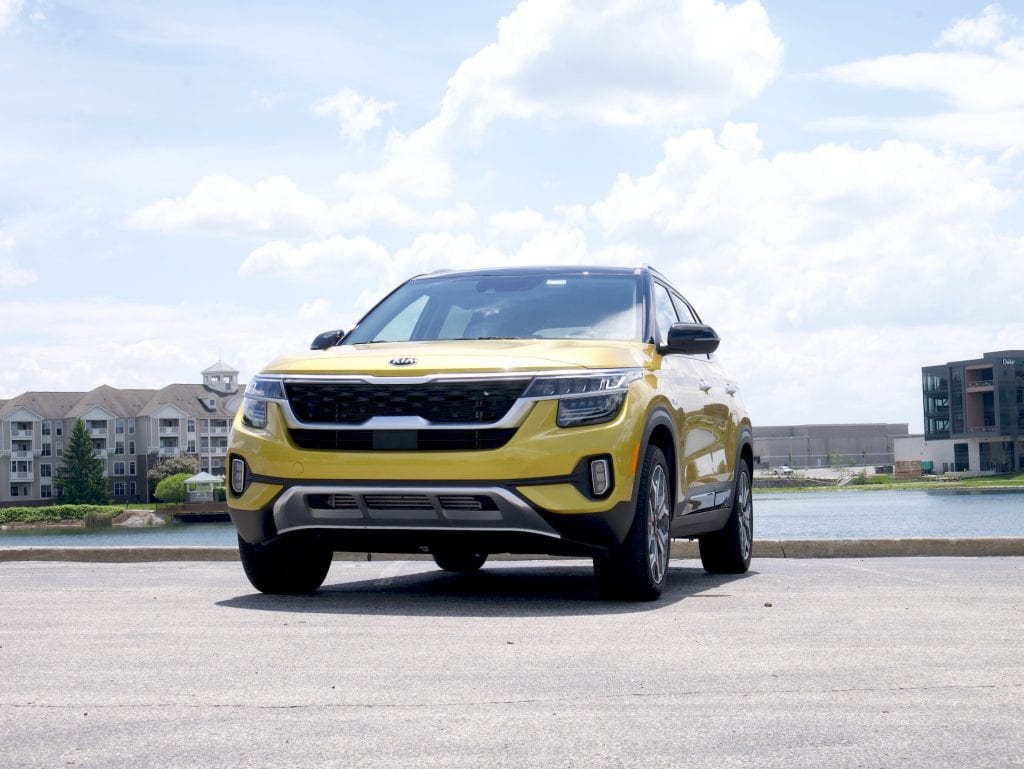 The Seltos does work. It’s a really good vehicle all-around, and it looks better than quite a bit of the competition in my opinion. The vehicle offers a good overall package.

I found the Seltos to feel light and nimble on the road. While I wasn’t thrilled with the transmission or throttle response, I found the handling to be excellent. On the way up to the lake house, I took a few curvy roads after letting the Seltos gobble up about 100 interstate miles.

The little crossover handled highway duties with ease, and when it came to the twisties, the Seltos surprised me with how agile and eager it felt. It’s one of the better-handling crossovers in the segment, and that’s saying something because there are some good vehicles in this segment. 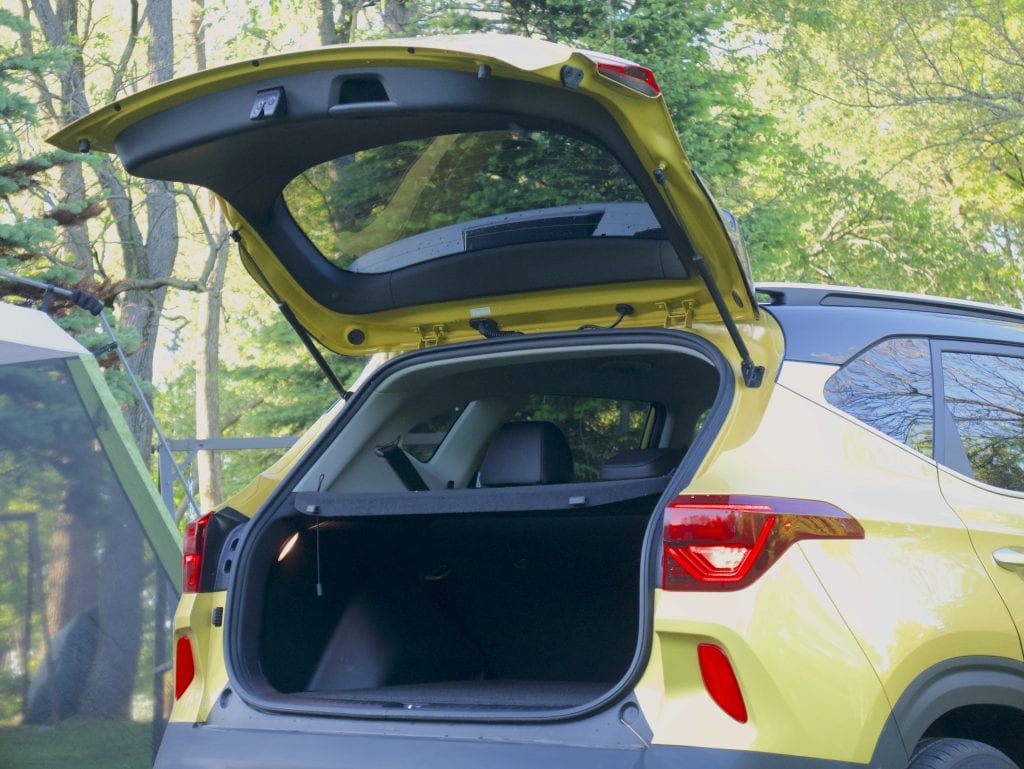 As far as practicality, the Seltos does a good job. The rear seat felt a little tight, but the cargo area was plenty big enough, with room for several bags, a full-size cooler and a tent-like canopy all packed up and put away in its bag.

The technology was great, too. I found some of the driver assistance technology to be a bit annoying, and I actually turned most of it off the last few days I drove the vehicle, but all of it worked well, and I can see it being a big help to the busy mother or father with some rambunctious kiddos strapped into the rear seats.

Does the Kia Seltos Justify its Price 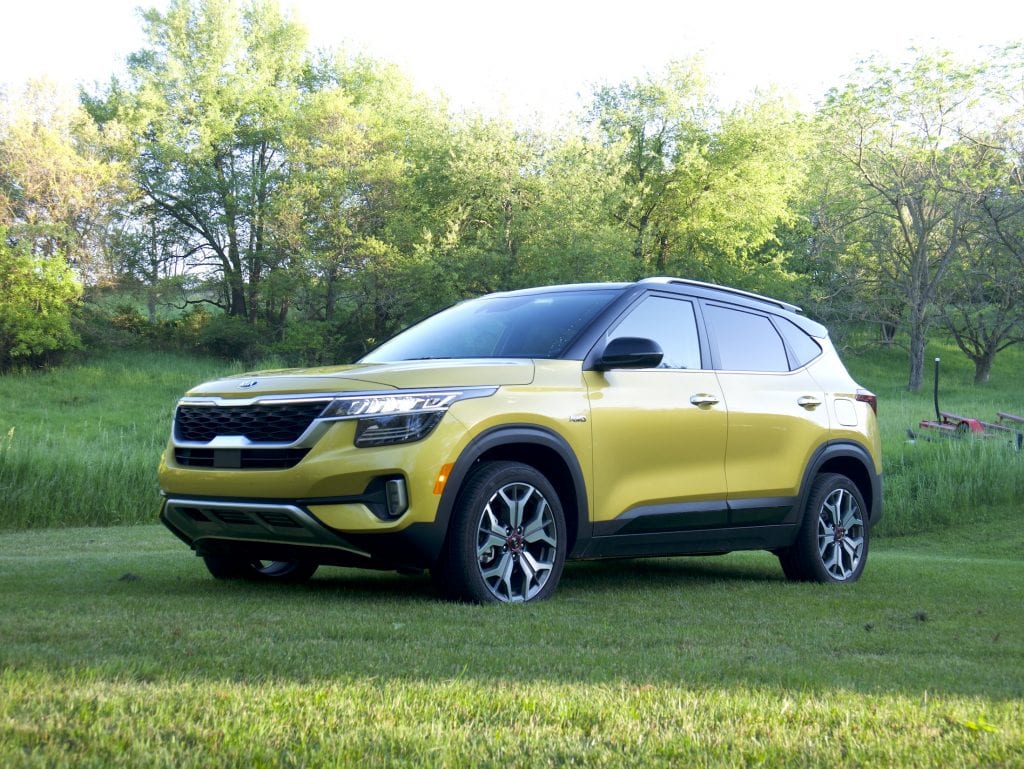 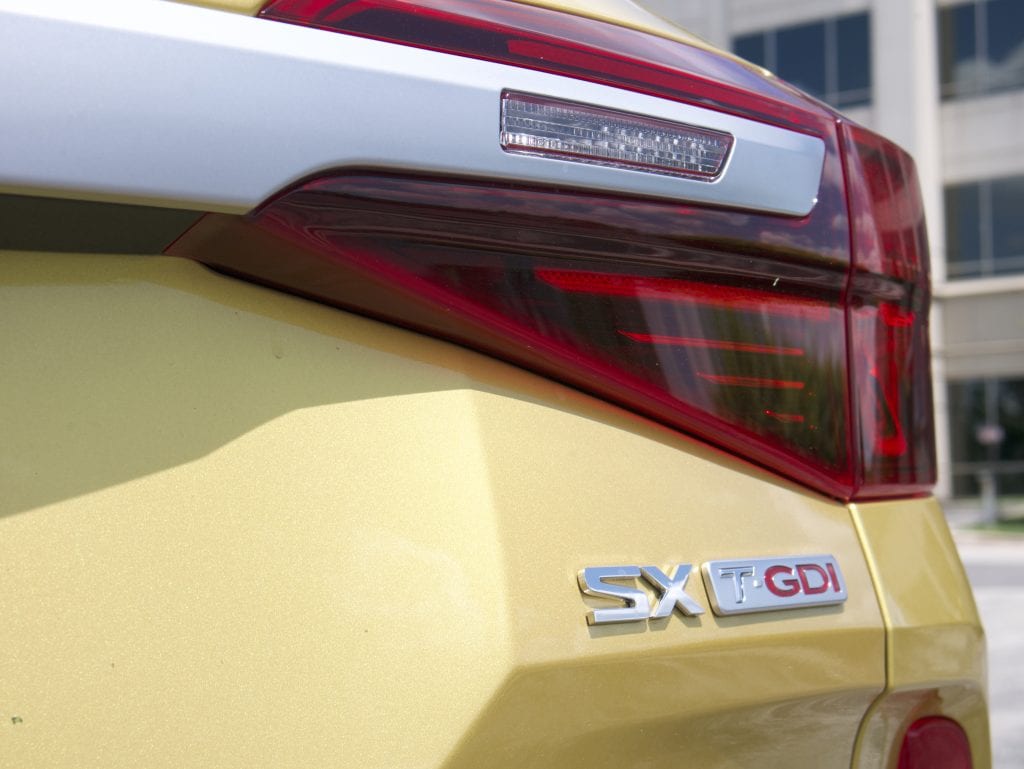 The model I drove was a fairly well decked out SX Turbo trim level machine, with most of the options, and it still only came in with a $29,485 price tag. Now, I think that’s a little high for this segment, but you don’t have to get all of the options and features that came with my tester. Even the base model is fairly well equipped.

If I was buying a Seltos, I’d go with The S Turbo trim. You get the turbo engine and some of the upgrades, but you also get a starting price of $25,490, which is reasonable.

What’s the Verdict on the Kia Seltos? 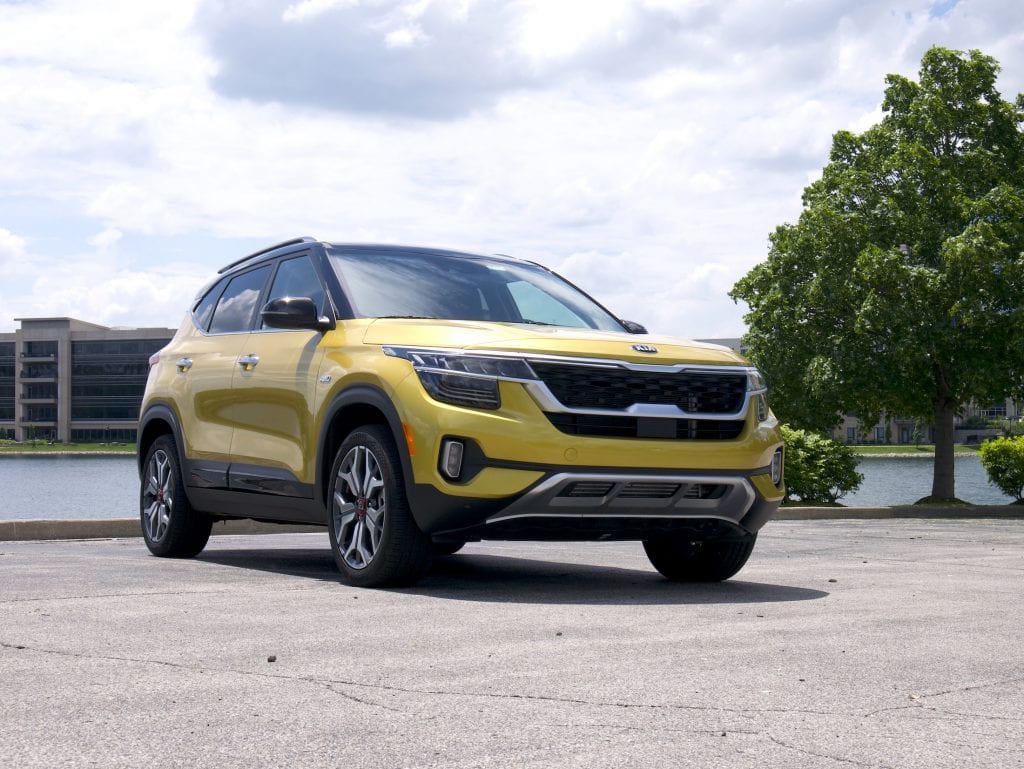 It has enough visual flair to keep you interested and the interior is just correct in many ways. Add to all of that the numerous technology options that either come standard or as an option and you have a vehicle that will offer the vast majority of buyers exactly the vehicle they want. 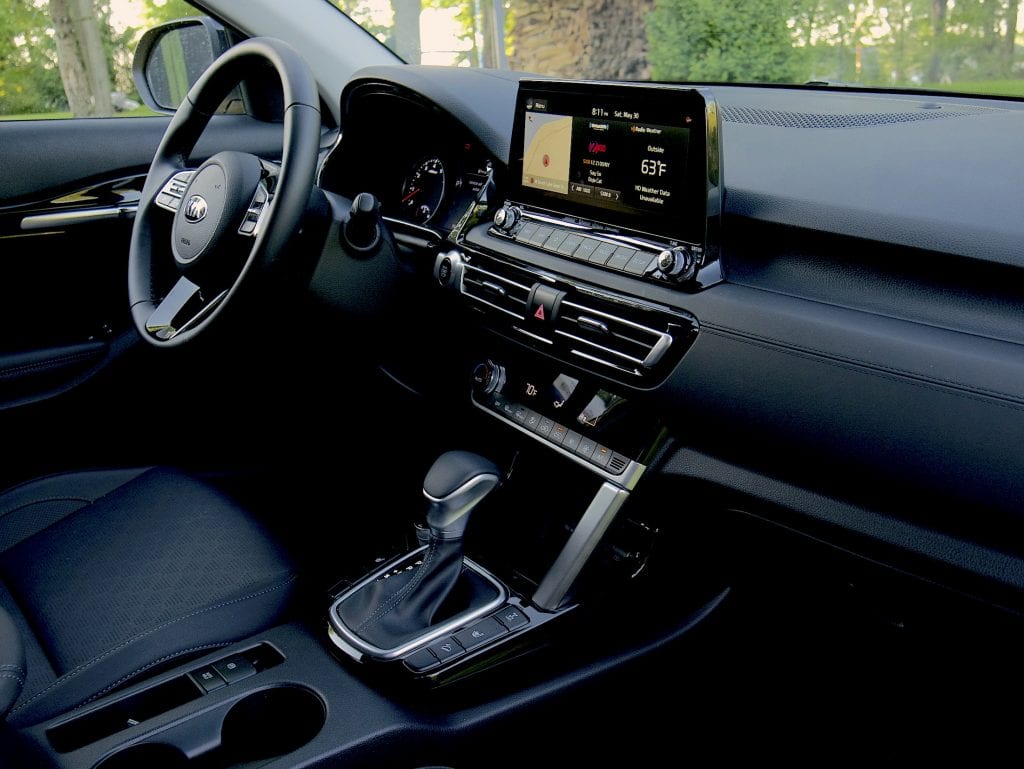 My only real gripes with the vehicle are that its transmission feels unrefined and I smacked my head on the doorsill—which as I’ve said before could just be my personal issue. My only real criticism of this vehicle is that it feels a bit safe and boring.

The Telluride felt a little bit like Kia was taking a chance on something new, and that, to me, was part of the appeal. The Seltos lacks that charm, but it makes up for it with utter competence in just about every area. It’s a good vehicle and one that many drivers will enjoy.

Good but Not Perfect
Verdict
The Kia Seltos is one of the better offerings in its segment. It’s quick and agile and it offers one of the better interiors in the business and more cargo space, but its unrefined transmission makes driving, especially at low speeds not wildly enjoyable.
Positives
Excellent handling
Ergonomic and comfortable interior
Powerful turbo engine
Generous cargo space
Modern exterior styling
Negatives
Unrefined dual clutch transmission
Ingress and egress issues
Styling isn't for everyone
86

2021 Kia Seltos Review
Verdict
The Kia Seltos is one of the better offerings in its segment. It's quick and agile and it offers one of the better interiors in the business and more cargo space, but its unrefined transmission makes driving, especially at low speeds not wildly enjoyable.
Reader Rating1 Vote
Positives
Excellent handling
Ergonomic and comfortable interior
Powerful turbo engine
Generous cargo space
Modern exterior styling
Negatives
Unrefined dual clutch transmission
Ingress and Egress issues
Styling isn't for everyone
5
Good but Not Perfect