All I think of when I see the Kia Soul is hamsters. Kia had a successful marketing campaign that included them a while back and the image has stuck for me. It’s not an inspiring one, but then should the Kia Soul really inspire you?

The Kia Soul is honestly a cross between a hatchback and a crossover. It sits high like a crossover but drives and looks a lot like a funky hatchback. It’s also often lumped into the wagon segment, but it doesn’t deliver nearly enough of what I look for in a wagon to truly qualify either.

Here at Good Car Bad Car, we place this oddball machine in with the small cars, where I think it really belongs. In that playground the car performs well, placing fifth overall so far this year.

The Kia Soul was reworked for 2020. The popular little hatchback thing is an important car for the company and I was happy to have the chance to drive one.

I spent a week with the Kia Soul. I drove the car softly and carefully for a couple of days to get a feel for it and then spend a few more days flogging it pretty hard. The vehicle didn’t flinch the whole time I had it, and I’m happy to say it still has all of the hamster-y charms that it did in previous generations.

The Kia Soul is still far from perfect. It’s kind of one of those vehicles that thrives because it’s imperfect, though.

It’s odd, and it’s for people who want an odd car but need something practical. Like the elementary band teacher who needs a way to transport instruments around but still wants to show off his quirky side, or the ex-hipster mom who isn’t quite ready to break down and buy a minivan despite the fact that she has two kids and honestly would be happier with a couple of sliding doors.

The Kia Soul is one of those vehicles that does its job well and has a sense of style while doing it, but it’s never an aspirational vehicle. All of this was very much on my mind while driving the car for a week. 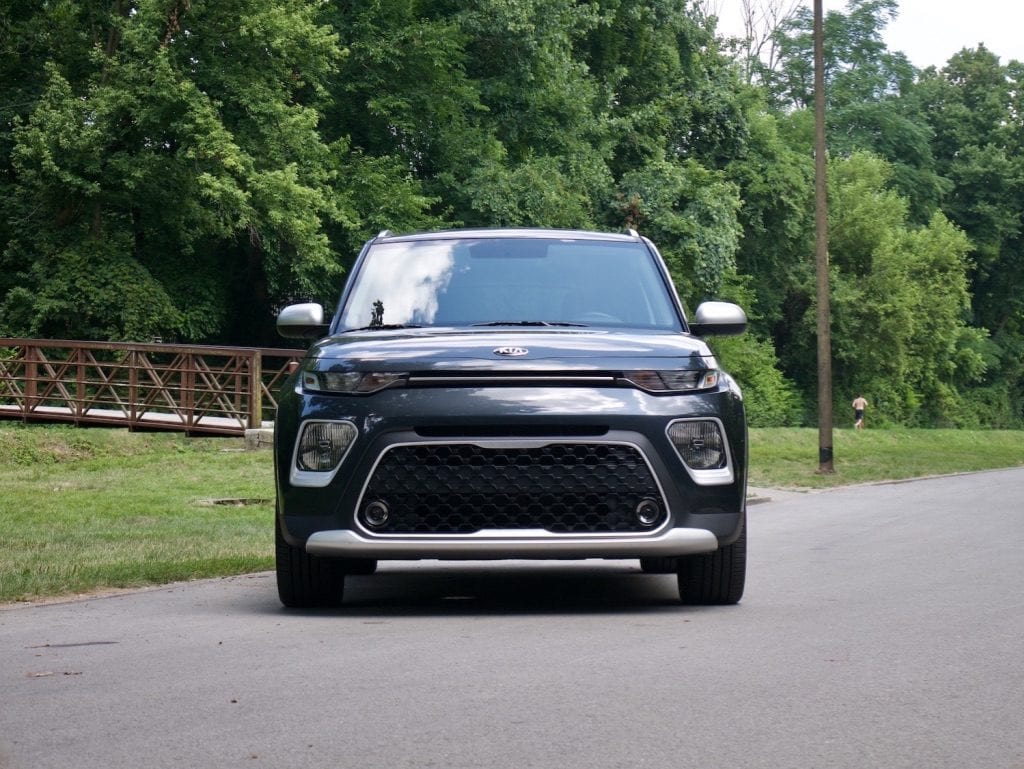 As I said above, the Kia Soul is a little hard to pin down. Kia will likely tell you its a crossover because crossovers are in vogue right now, but it’s really more of an upright hatchback flavor of a car with a side of sporty sauce.

The vehicle is a spunky, affordable little hatchback. It’s an excellent machine that blends practicality with a unique style. It’s not for everyone, and that’s part of what makes the vehicle so interesting. 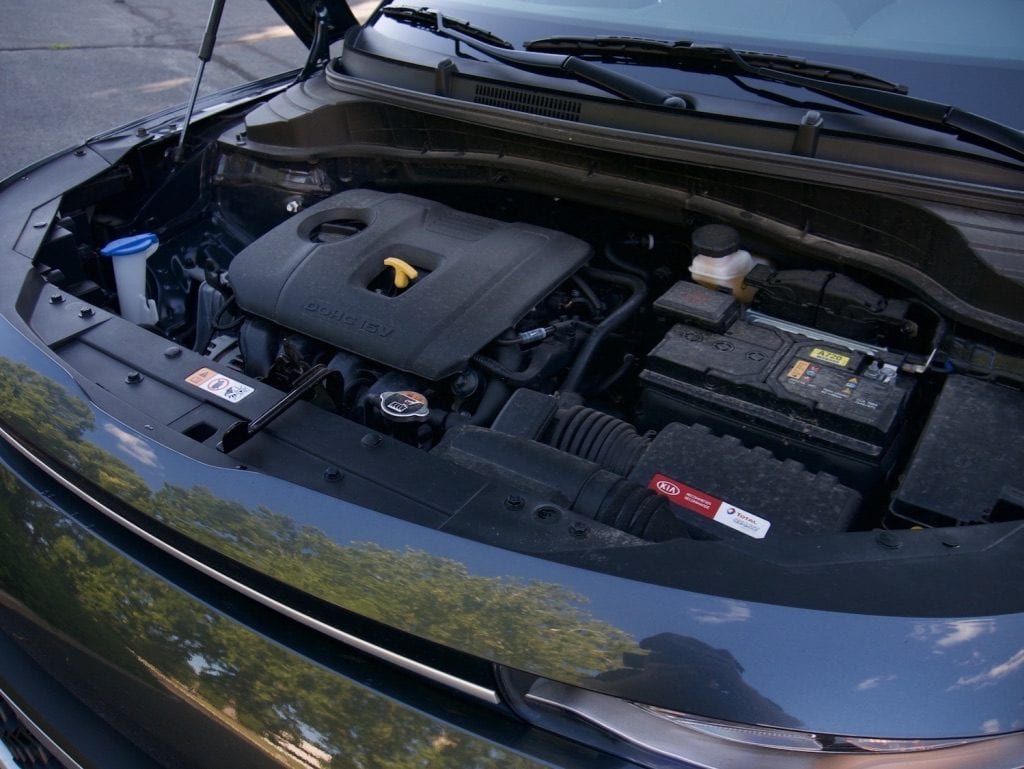 The base version of the Kia Soul sports a 2.0-liter four-cylinder engine that makes 147 hp and 132 lb-ft of torque. It is not a peppy engine. It does, however, get pretty good gas mileage. The vehicle gets 27 mpg in the city, 33 mpg highway, and 30 mpg combined.

You can buy the Soul with a manual transmission—one of the few cars out there offered with this option. If you go with the automatic option, you’ll get Kia’s Intelligent Variable Transmission, which is a form of CVT.

There’s also a 1.6-liter turbocharged four-cylinder option should you want more power. This engine makes 201 hp and 195 lb-ft of torque. The engine is mated to a 7-speed dual-clutch automatic. Fuel economy is 27 mpg in the city 32 mpg highway, and 29 mpg combined. If you have the extra money, get this engine.

A Spartan Interior but Tech-Friendly Interior 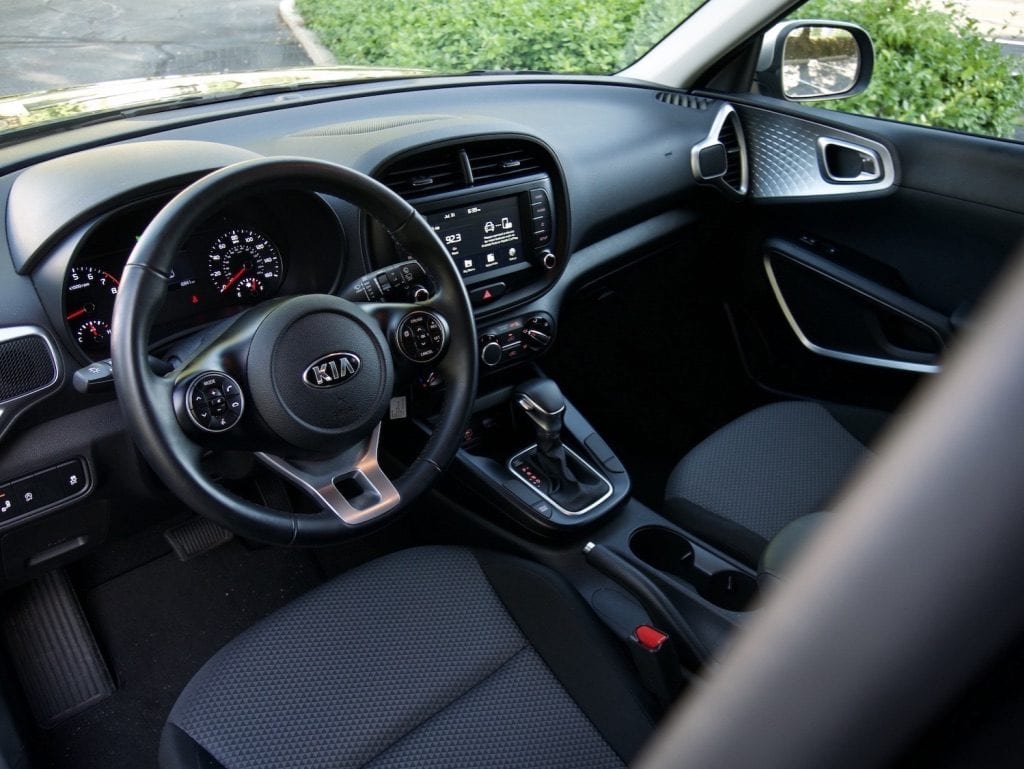 The interior of the Kia Soul is nothing special. It’s honestly pretty spartan with the styling and the controls for various vehicle features are simple and look somewhat dated. However, everything works very well.

If you were to jump up the Kia Soul trim line, you’d find a car equipped with other cool features, too, like a HUD, wireless charging, a 10.25-inch touchscreen display with navigation, HD Radio, and more. 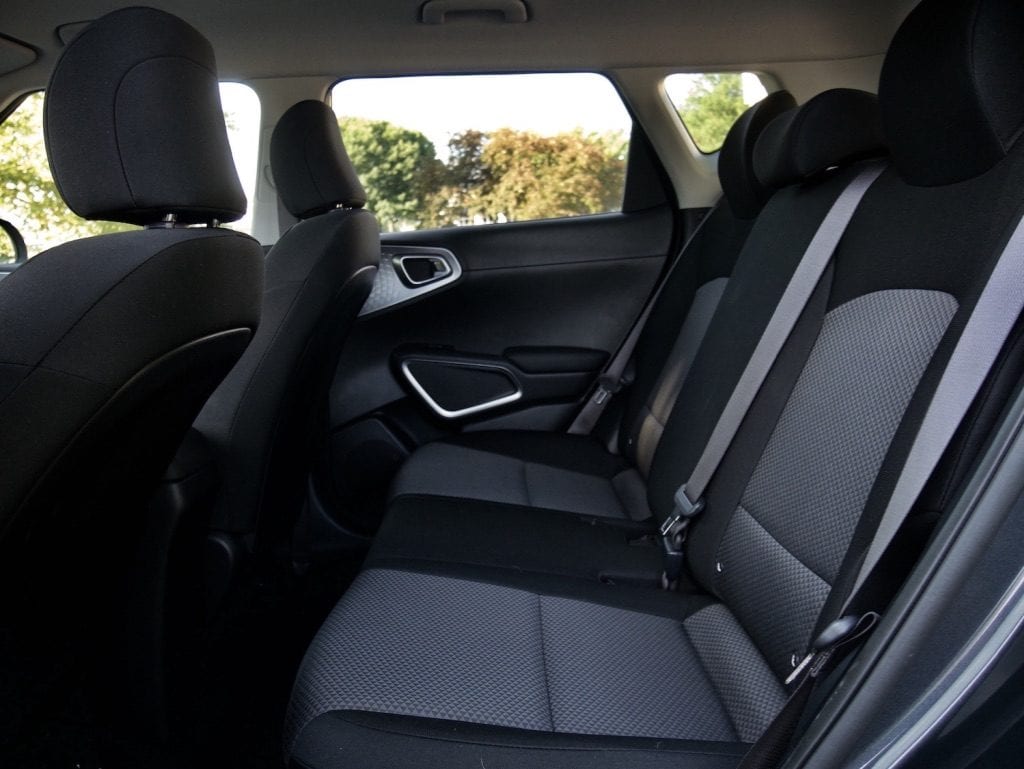 When it comes to seating in the Soul, the LX X-Line model that I drove had an upright seating position and firm padding. This firm padding provides plenty of support, but the seats aren’t wildly comfortable. I found them more than acceptable for the price, but if you want a softer seating surface, you might have to look elsewhere. 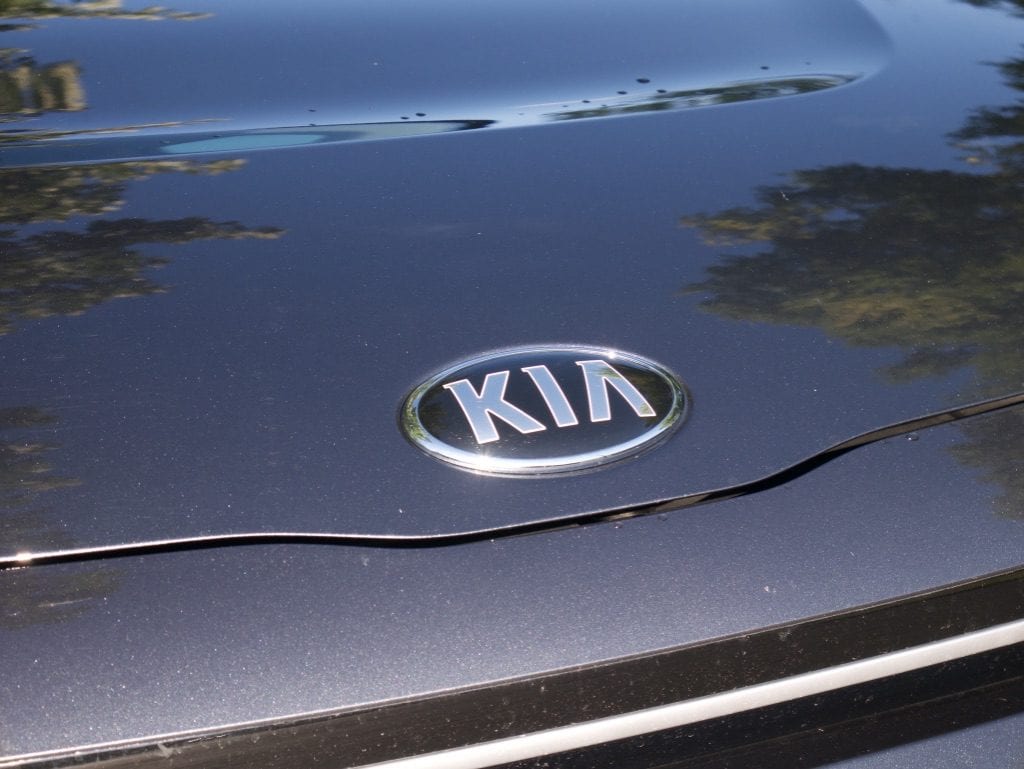 The Kia Soul is a very safe vehicle. It was selected as a Top Safety Pick+ by the IIHS. The only things marring its ratings were poor headlights in lower trim levels and an acceptable ease-of-use rating for the LATCH child safety seat system.

The NHTSA has not yet rated the 2020 Kia Soul (at the time of this review). However, the 2019 Kia Soul received a five-star overall safety rating from the government, so you can expect the 2020 model to do well, too. 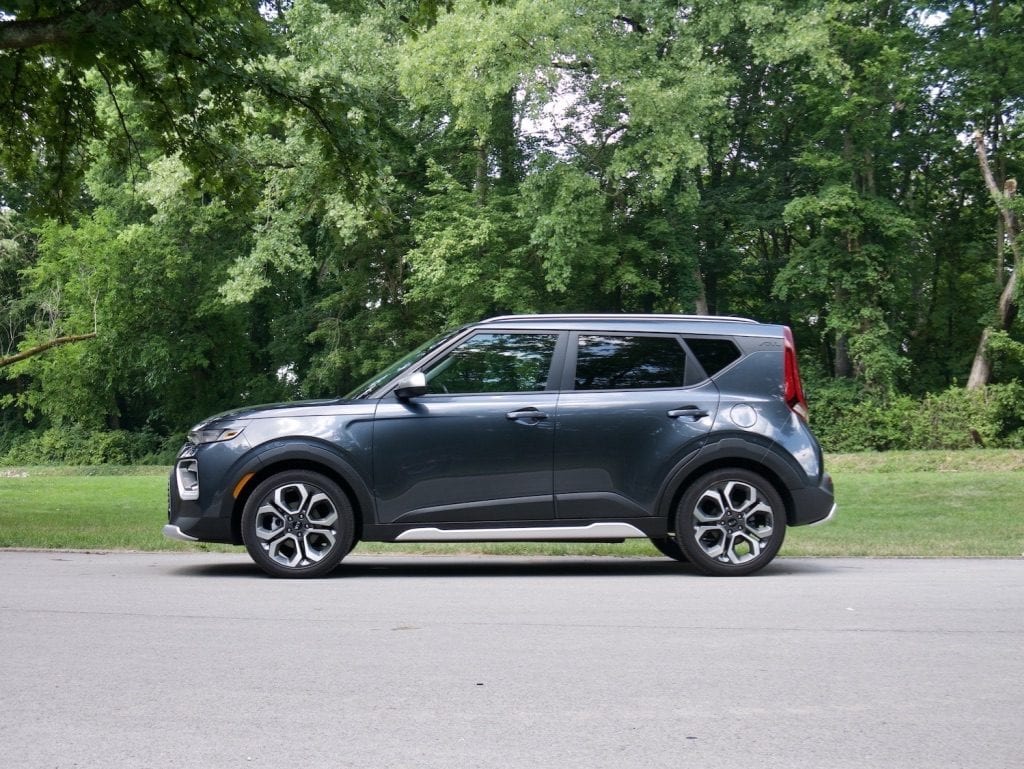 The Kia Soul measures 165 inches long 71 inches wide and 63 inches tall. I struggle a bit when it comes to finding vehicles to compare it to because the Soul exists in the gray area between crossover and car.

In terms of cargo space, the Soul does well. The vehicle offers 24.2 cubic feet with all seats in place and 62.1 cubic feet with the rear seats folded. This is on par or better than any of the competition. 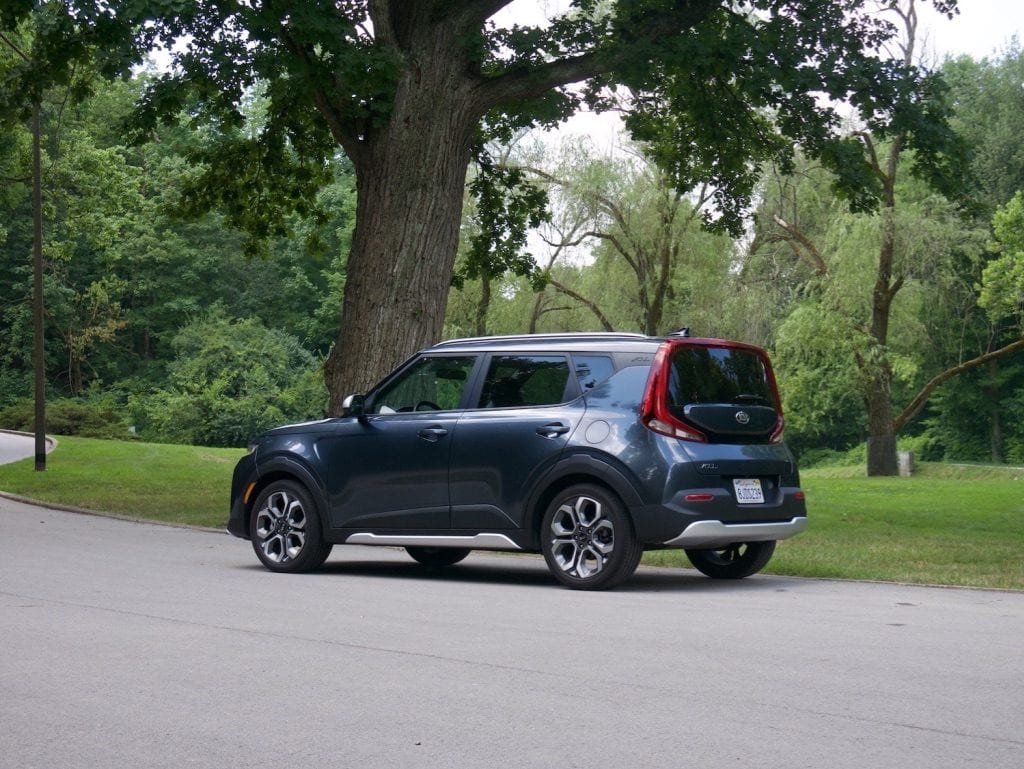 The Kia Soul does a very good job. It is a car that has been crafted well for its price point. If you go into the driving experience knowing what to expect, you’ll come away from the experience a very happy driver.

The Kia Soul drove well. It’s comfortable on the highway, quick and nimble in traffic, and honestly kind of fun on a twisty road. A good friend of mine called it “a little go-kart.” I have to agree with his assessment. The car handles really well.

My main complaint with the Soul is that the base engine is slow. Kia has a better engine, though and if you have some extra money you should spring for it. The turbocharged engine is worth it. 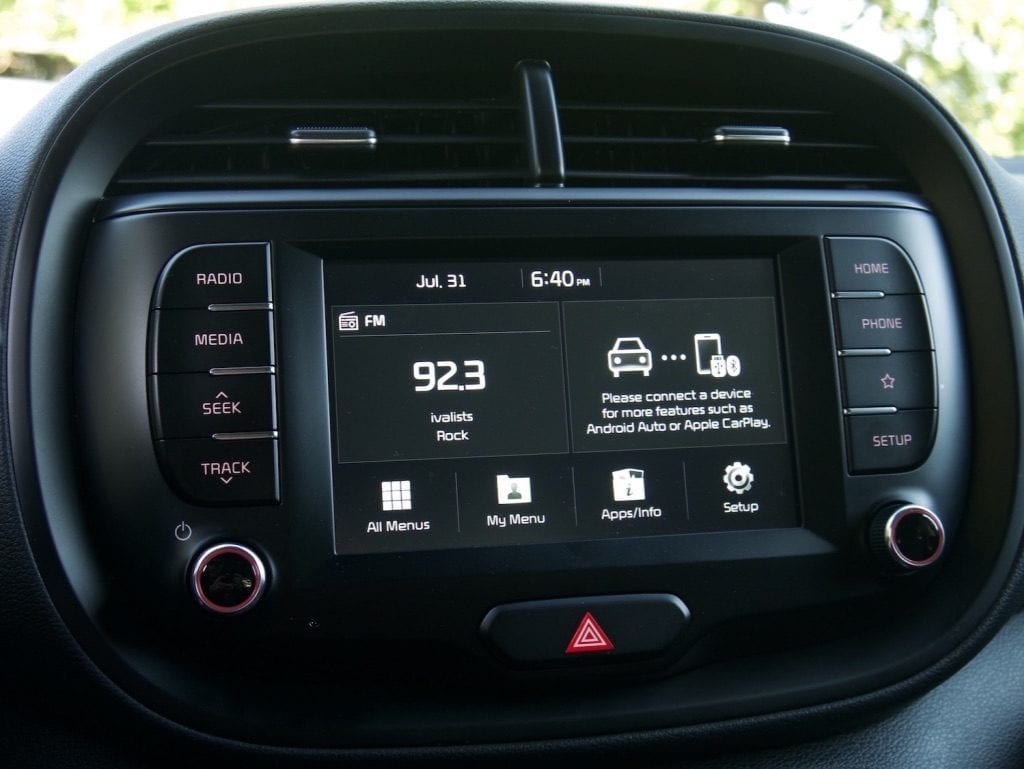 Otherwise, I found the Soul to be a very good car. The infotainment system works well and the fact that Android Auto and Apple CarPlay are standard is a nice feature. The cargo space isn’t massive, but it does a good job of swallowing all but the biggest things you could need to carry or move from place to place.

The only other thing I can think to complain about is that the car isn’t as quiet as some of the competition. When you take the vehicle on the highway, you do get a fair amount of road, wind, and tire noise. I just cranked up the six-speaker audio system. I assume you’ll do the same. 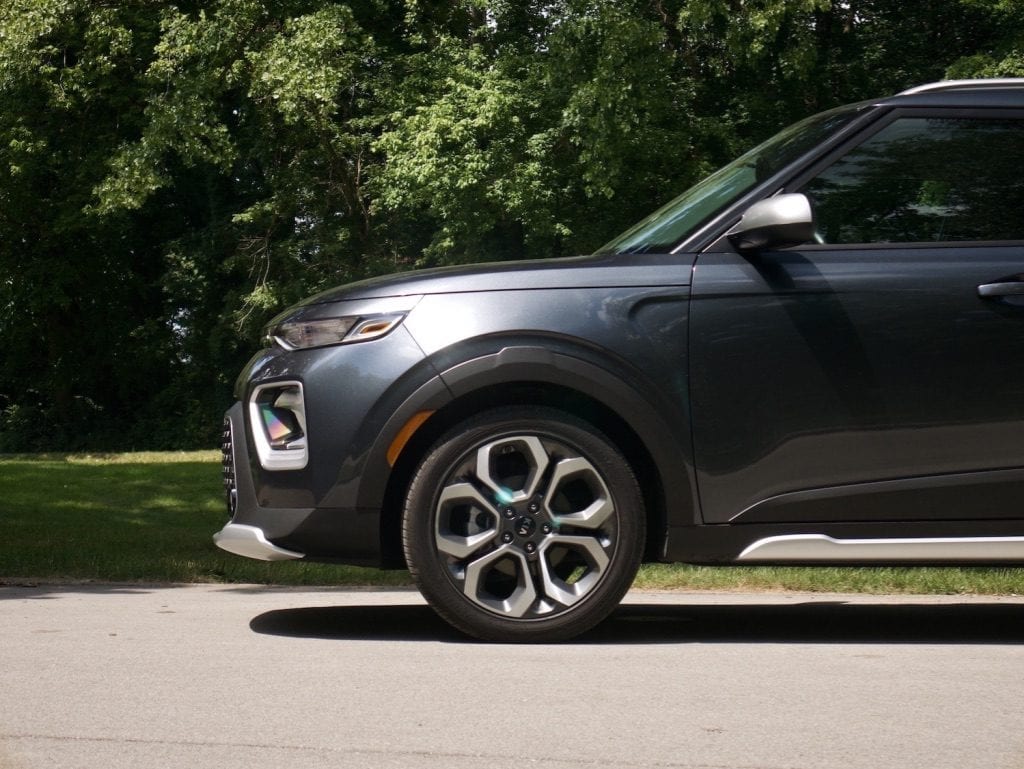 Let’s take a look at the price of the soul and how it compares with the competition. In order to do this, we need to look at what people will cross-shop the model with. Many people will look at the soul if they’re looking at crossovers, which I get. It sits up higher and stands a little taller. I still think of it like a car, but we should do the price comparison on both cars and crossovers.

In terms of crossovers, the Kia Soul is cheaper than some of its stiffest competition. I’d put it in the same class as vehicles like the Nissan Kicks, Ford EcoSport, Chevrolet Trax, and Jeep Renegade.

All of these vehicles are more expensive, and none of them—with the exception of the Jeep Renegade—are as good to drive and live with as the Kia Soul. Save yourself a couple of thousand bucks and buy the Soul.

Now let’s consider cars. The competition to the Soul when it comes to cars are vehicles like the Fiat 500L, Hyundai Elantra GT, Honda Civic Hatchback, and Toyota Corolla Hatchback. You might disagree with these options, but that’s what I would stack the Soul up against.

Again, the Kia Soul comes in under the price of these cars. Sure, you could point to even smaller hatchback cars as cheaper hatchbacks to compare the Soul to, but I’d argue they’re not nearly as good to drive or spacious as the Soul.

In terms of driving prowess, the Soul doesn’t match up to the Civic Hatchback, the Corolla Hatchback, or the Hyundai Elantra GT. However, many people will like its more upright seating position and improved practicality. In short, this is a car that totally justifies its price. 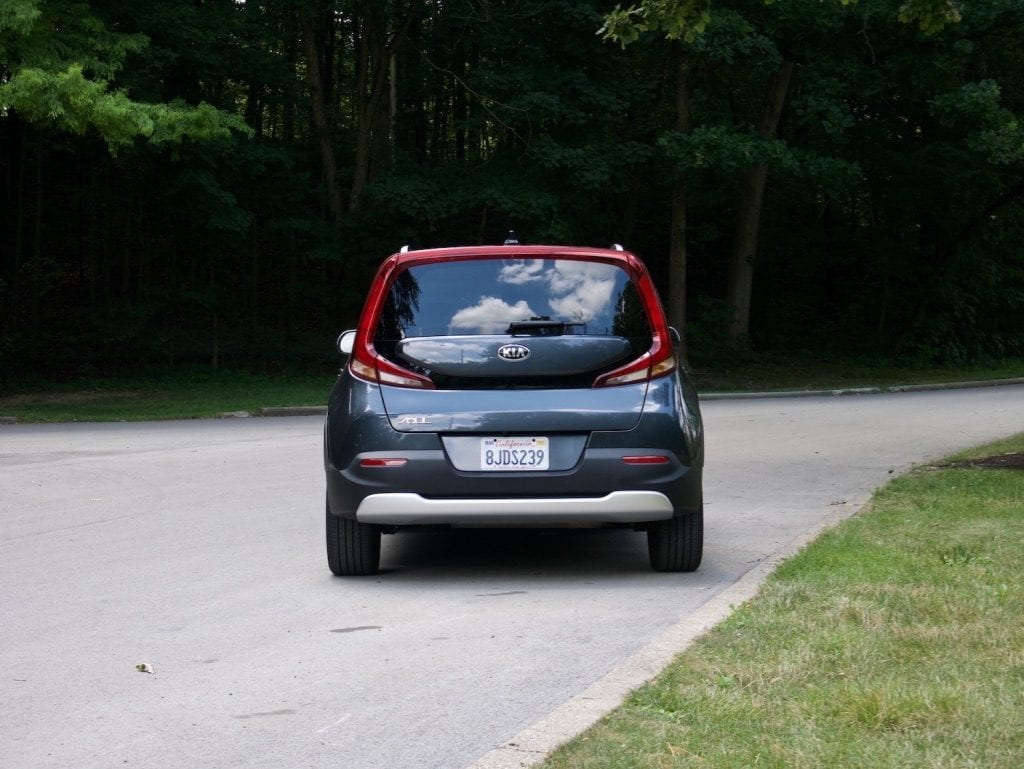 The Kia Soul is an excellent hatchback car. If you stuff it in with all of the crossovers, it’s still an excellent car. It’s not the most exciting but it is practical. If you don’t mind putting up with some funky styling and constantly thinking about hamsters every time you walk out to your garage, then you should be quite happy with this little people mover.

The best thing about the Soul is that it’s appropriately priced for what it is. There’s something about this trait that makes it feel like an honest car. Kia has a winner on its hands, but it’s not charging a premium price. You can get one of these in your garage for a very fair price, a price that’s better than most of the competition, and that’s important.

2020 Kia Soul LX X-Line Review
The Breakdown
The Kia Soul is an excellent hatchback car. If you stuff it in with all of the crossovers, it’s still an excellent car. It’s not the most exciting but it is practical.
Overall
Reader Rating0 Votes0
Positives
Practical & spacious interior
High seating position
Good infotainment system
Handles well
Negatives
Base engine is slow
Fairly noisy inside the cabin
Styling isn’t for everyone
3.8