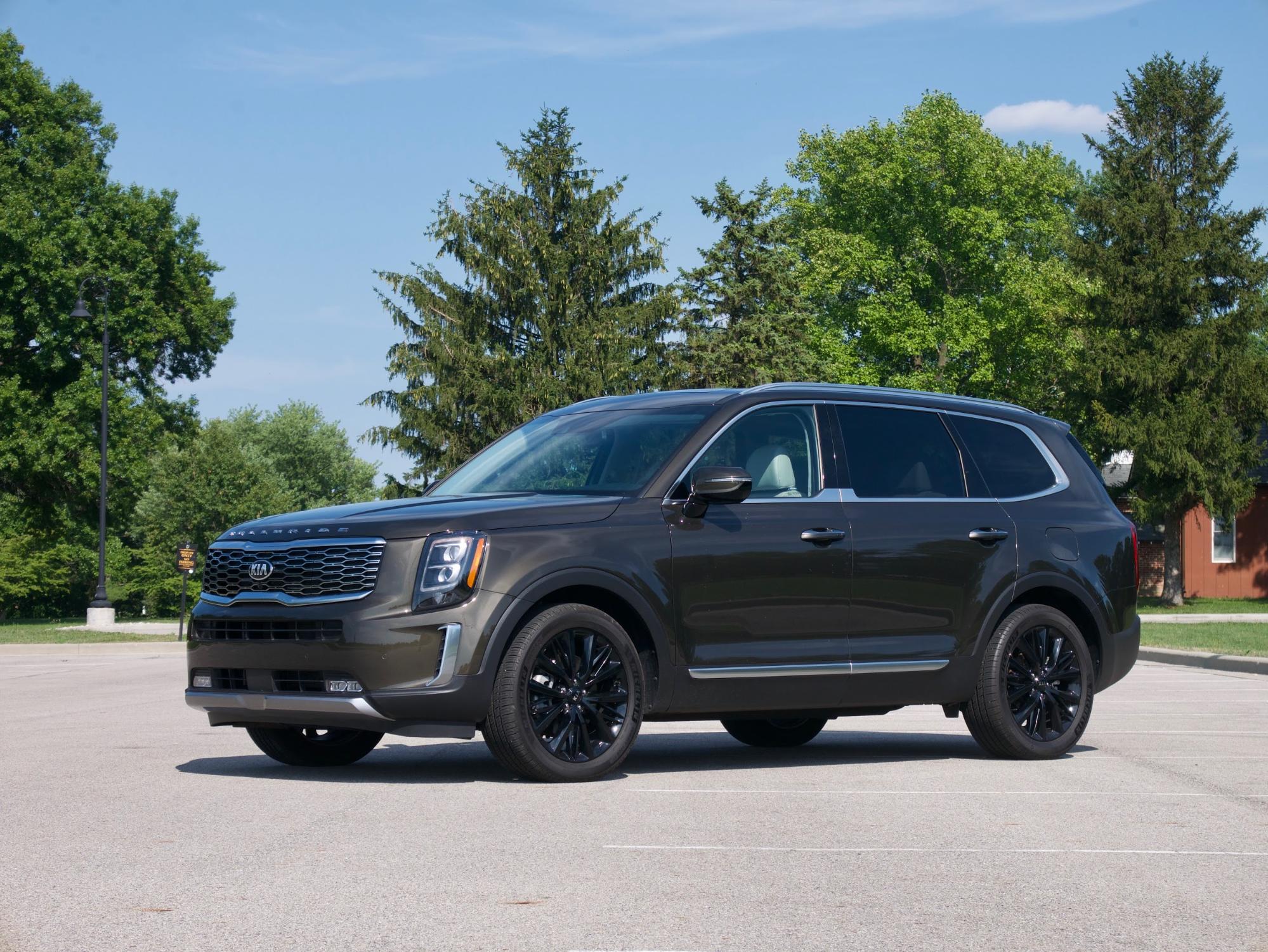 The Kia Telluride is the company’s entrant into a very profitable and important segment of the market—the three-row crossover SUV market. The vehicle brings bold styling, a big overall footprint, and lots of room. It’s designed to be a people mover, and it is going up against some of the industry’s stalwarts.

The Telluride is big and knows it. It’s for drivers with big families who want a lot of space, plenty of power, and high levels of comfort. The Kia Telluride delivers on much of what it tries to do, but it still left me unsatisfied. It felt like it was trying to be more luxurious or special than it is. It’s good but not great, and in a segment so competitive, Kia might have to do better to succeed. Still, this is a notable move in the right direction for Kia, and I commend their efforts.

I got to spend a week with the vehicle. I drove it all over Indianapolis. It took it on tight city streets where the Telluride’s large size was put to the test. Then I cruised on some country roads and the interstate. It also found a couple of twisty patches (a true feat in the flat grid of roads in Indiana) and managed to find the limits of this vehicle.

It’s not sporty. It’s not meant to be. The Telluride is a vehicle designed for the suburbs. It’s a vehicle that will move you and your family from place to place with ease and it’ll bring along most of your stuff with you. It’s good at what it does, but I struggle to say it’s good enough to put the well-established three-row SUVs from Honda and Toyota out to pasture. 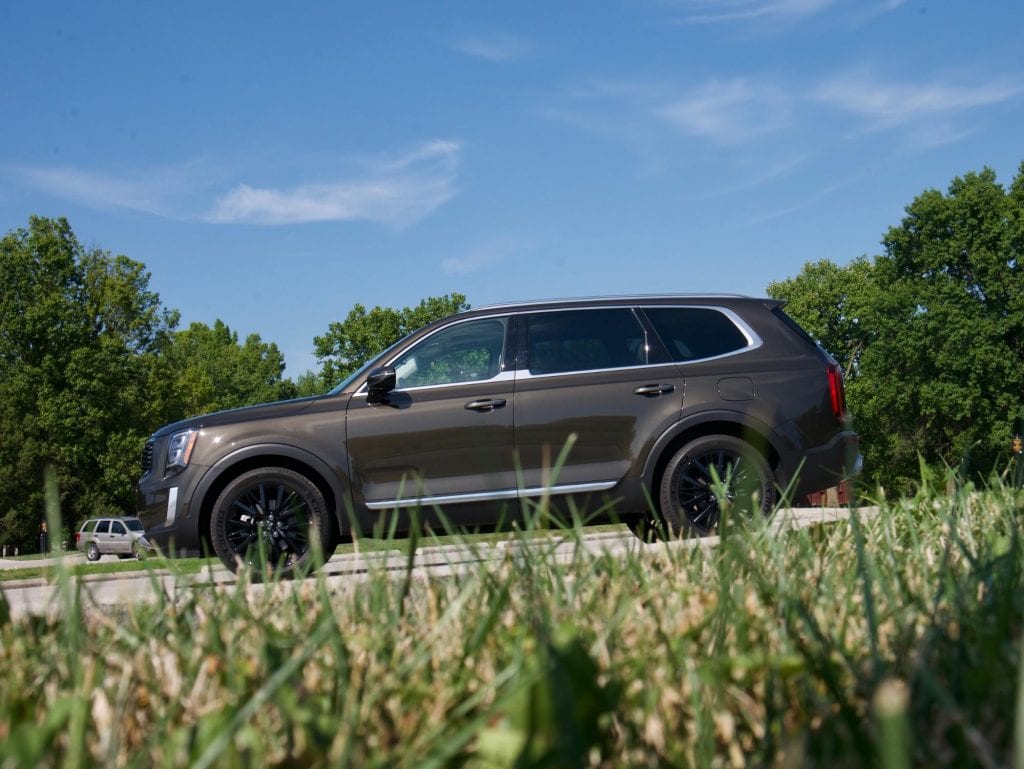 The Kia Telluride is a large, family-oriented SUV with three rows. The SUV features an upscale looking interior, especially for a Kia. It’s a bold and big vehicle with plenty of room for luggage, people and just about everything you can think of.

It’s not necessarily hardcore off-roader, though it does have the goods to handle some sloppy snowy conditions, some dirt roads and muddy trails, and some mild four-wheel-drive duties. It’s the most at home cruising on the highway and around the suburbs.

In other words, it’s a family vehicle built for the masses. It hits the market right where people are looking, and is an interesting alternative to the other options out there. 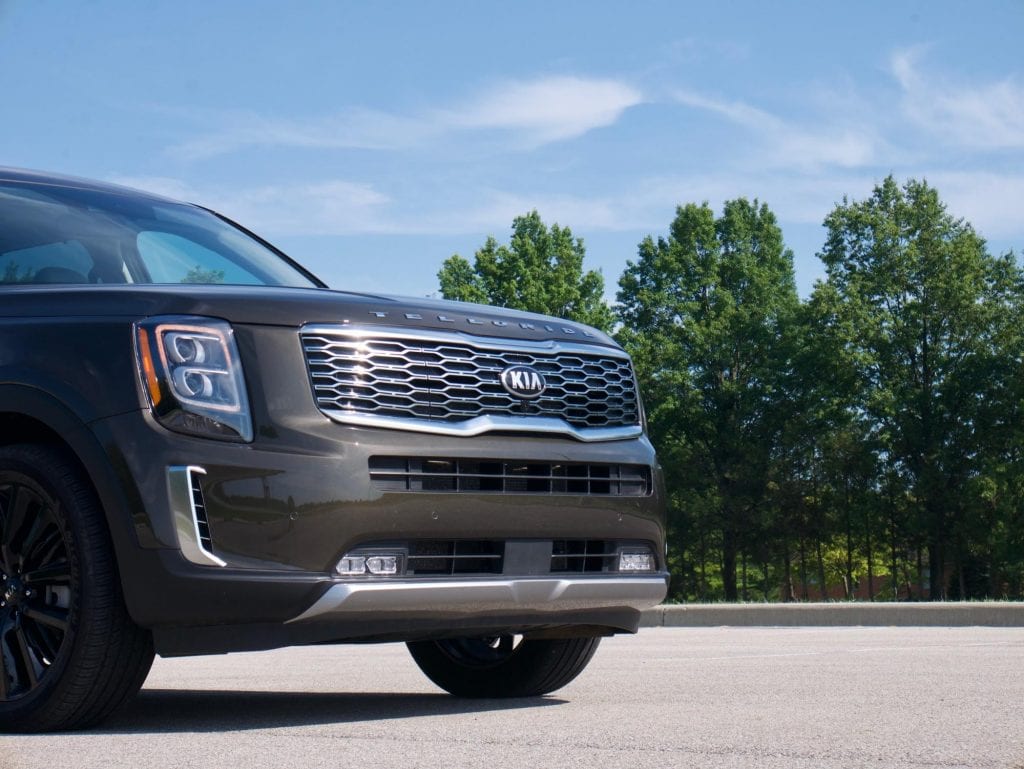 My tester came with a 3.8-liter V6 under the hood. This engine puts out 291 hp and 262 lb-ft of torque. I found the engine to be plenty powerful enough. Throttle response was predictable and the vehicle comes with a few ride modes. I found the ‘Smart’ mode that Kia and Hyundai have to be the best.

This is decent for a vehicle of this size. It’s close to the Honda Pilot and the Toyota Highlander, which are this vehicle’s main competitors. Those two models do have slightly better EPA numbers. 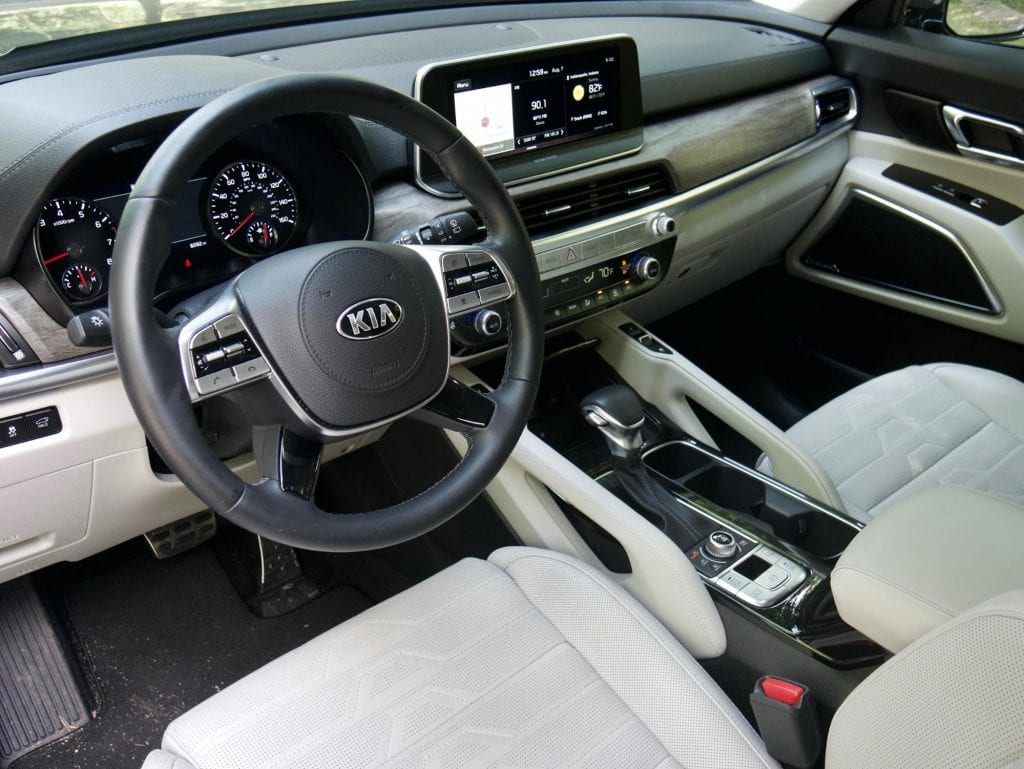 The interior of the Telluride is interesting. On a first look, it almost reaches premium brand levels in terms of materials, but as you use things, you come to realize, they’re not on par with BMW and Mercedes-Benz. Not even close. The doors on the storage bins inside the cabins, the switches, dials, and most of the buttons just don’t feel quite on par with some of the other brands out there, even some of the non-premium brands.

The overall design of the cabin is well laid-out and works from an ergonomic standpoint. The seats are upholstered in nice leather and many of the dash materials are top-notch. 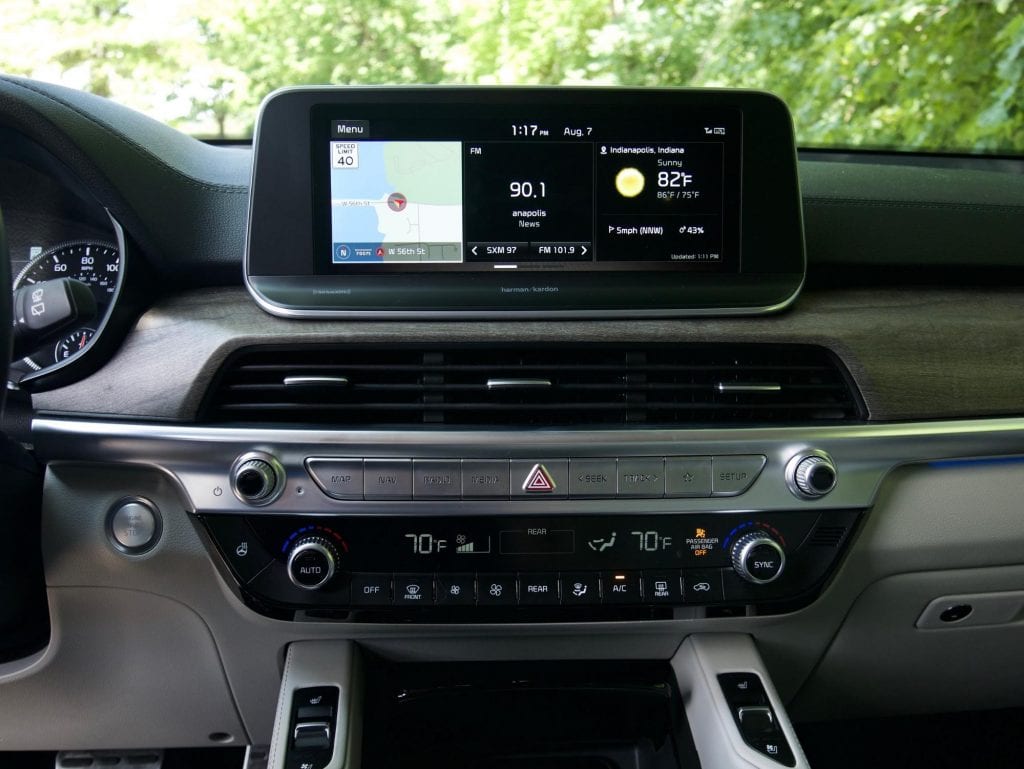 Also, the technology inside the cabin is no joke. The model features an 8-inch touchscreen infotainment system with Apple CarPlay and Android Auto. There is also navigation, multi-device Bluetooth connectivity, and everything else that comes with Kia’s UVO infotainment.

The interior is comfortable and well-designed in many ways, but materials and fit and finish left a little to be desired. The overhead interior light and sunglasses holder housing wobbled with only a little prodding, the door to the armrest storage area wouldn’t stay closed if you shut it too hard or too soft, and the storage area right in front of the center stack took far too much pressure to open and close.

It’s small details like these that revealed the Telluride’s issues. While not dealbreakers, they are mildly concerning. Kia has good design for an interior but needs to refine the details and make sure the vehicle is on par with the vehicles that it wants to compete with. 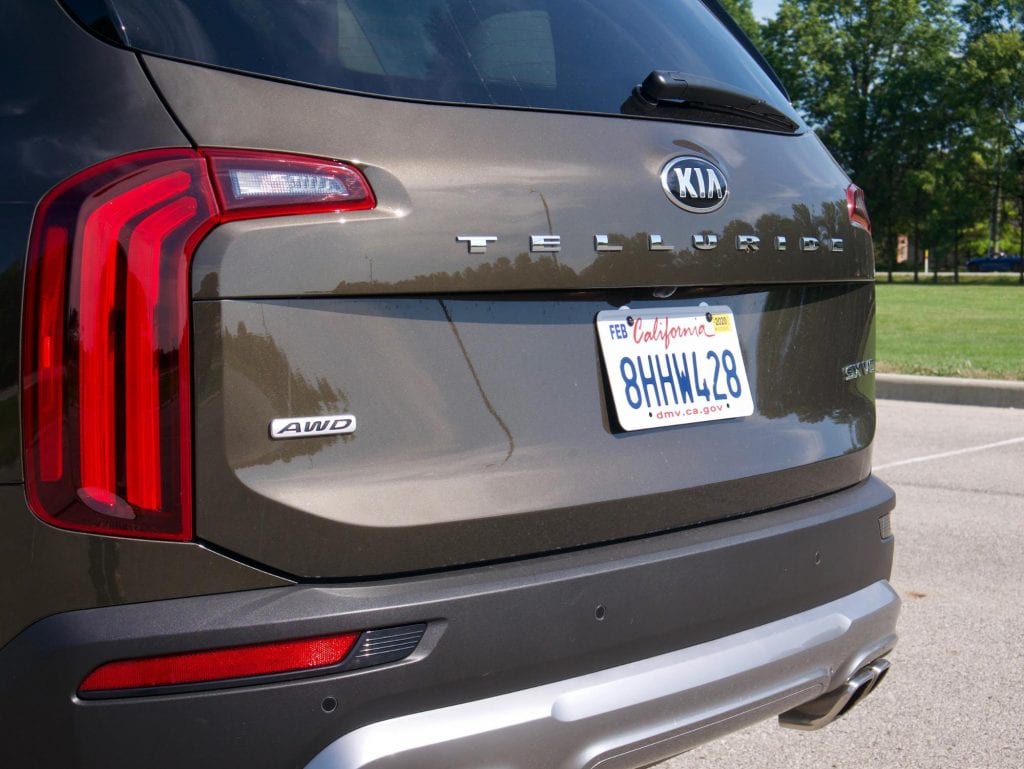 The Kia Telluride is a safe three-row SUV. The model received a Top Safety Pick rating from the IIHS. The vehicle received a good rating for all crash testing. It came up short of the Top Safety Pick+ rating—the organization’s top honor due—due to the fact that its headlights and LATCH child seat ratings were either acceptable or poor, depending on the trim level.

The NHTSA has not yet released its ratings for the 2020 Kia Telluride. However, I’d expect them to be pretty good if the IIHS ratings are accurate. 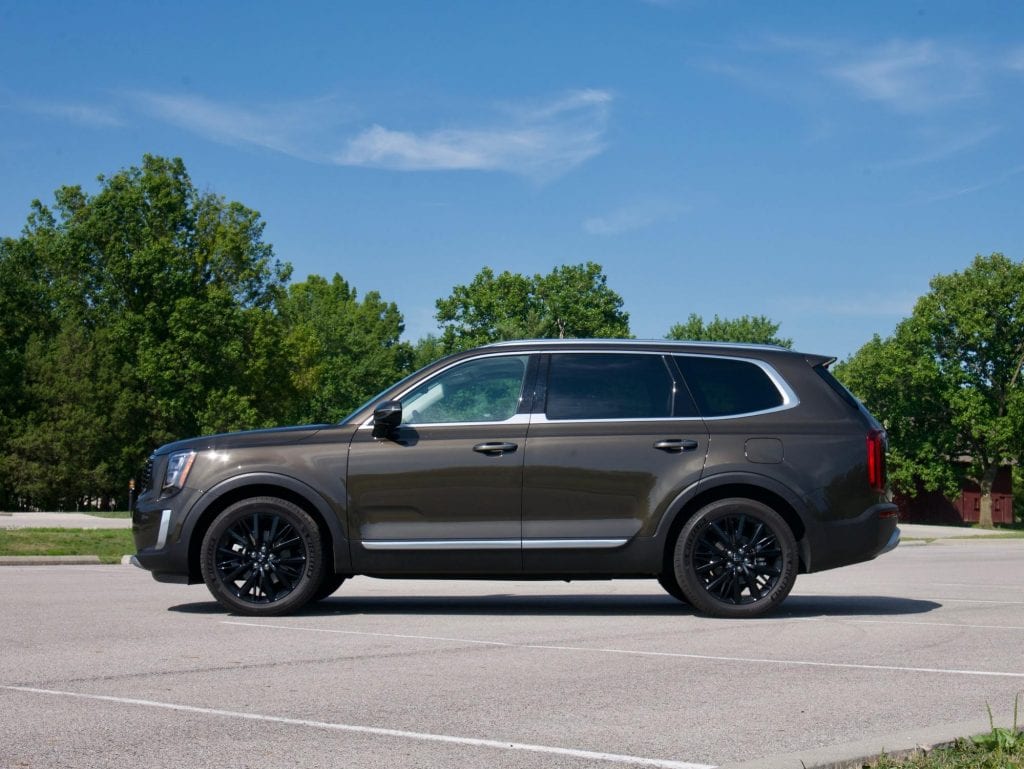 The Kia Telluride measures about 197 inches long, about 78 inches wide, and 69 inches high. When you compare the vehicle’s exterior dimensions to the competition, you’ll see that the Telluride is right on par with the Honda Pilot and just a bit bigger than the Toyota Highlander. 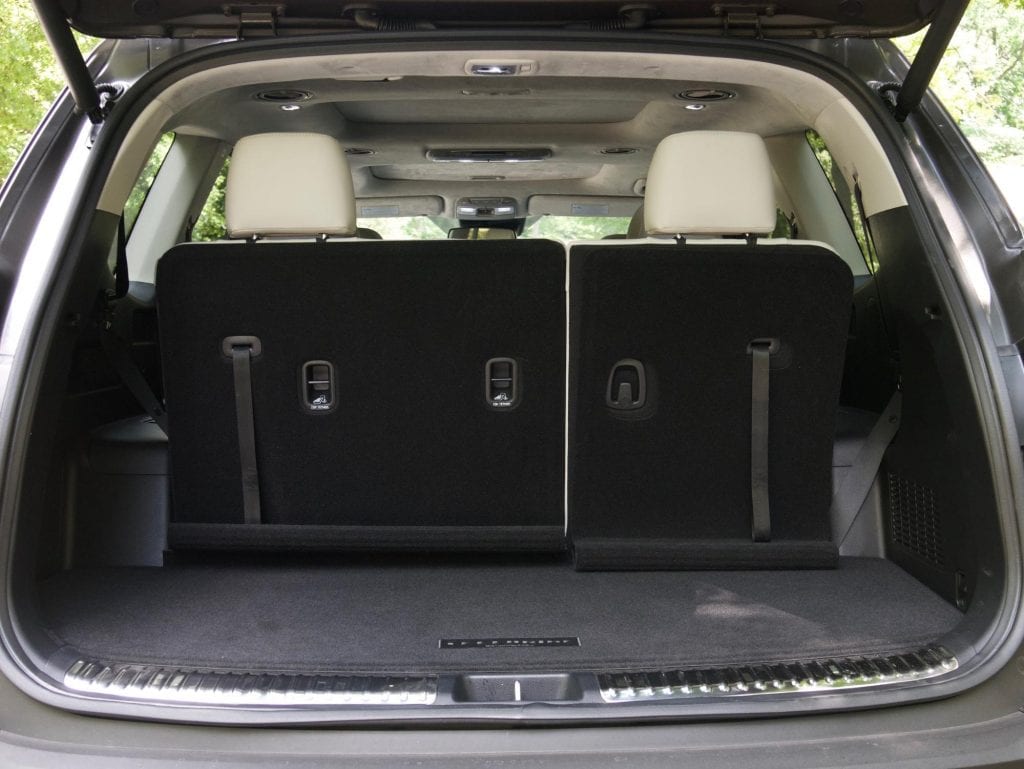 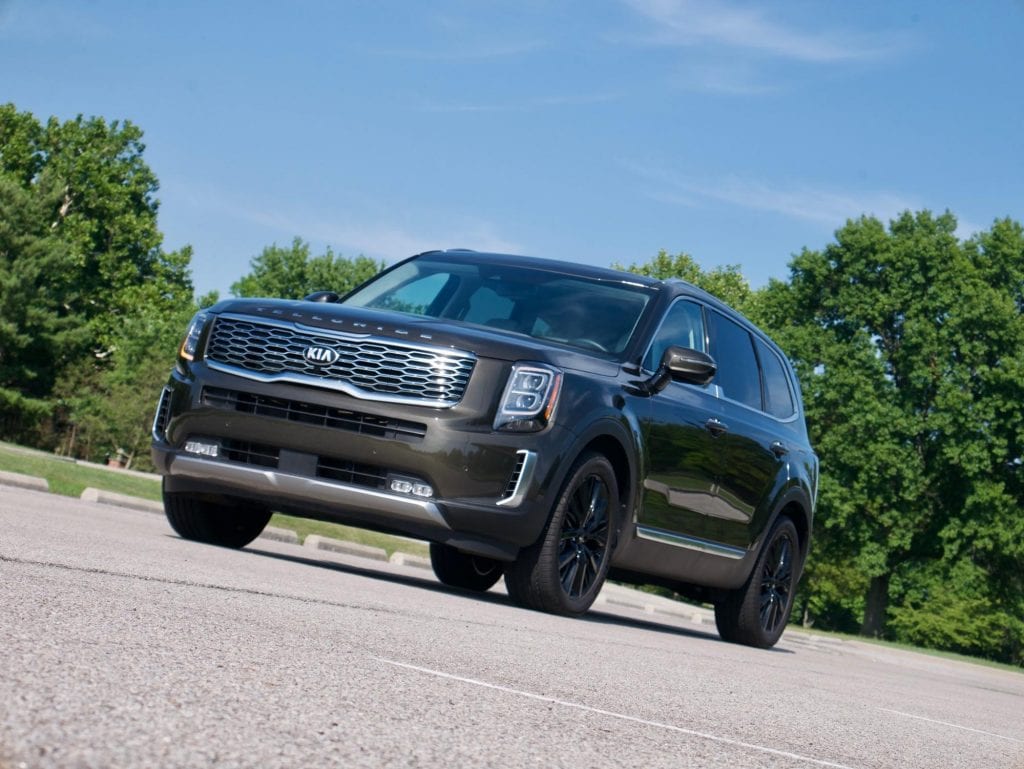 On many levels, yes, the Kia Telluride works. It’s spacious, comfortable, smooth on the road, and totally capable of handling the situations in which people will use it. The model drives nicely, it has plenty of technology for the modern driver and is one of the better three-row SUVs out there. However, it’s not perfect. Far from it.

You’ll find better build quality in Honda and Toyota products. The Kia’s interior design looks like it’s trying to be a little more premium than it is. Once you really start to take note of the materials used, you’ll find that it actually feels cheaper than its competition.

The engine is a high point for the vehicle. There’s plenty of power, and while the Telluride is far from punchy and sporty, it felt strong in every situation I used it in. Passing on the highway was no issue, and the vehicle handled its around-town duties with ease.

The Telluride should more than satisfy the needs of many drivers. The Telluride offers a lot of content, comfort, and performance, and many people will find it to be just fine. It will be interesting to see how the public responds to this vehicle and if it can compete with Honda and Toyota’s vehicles. 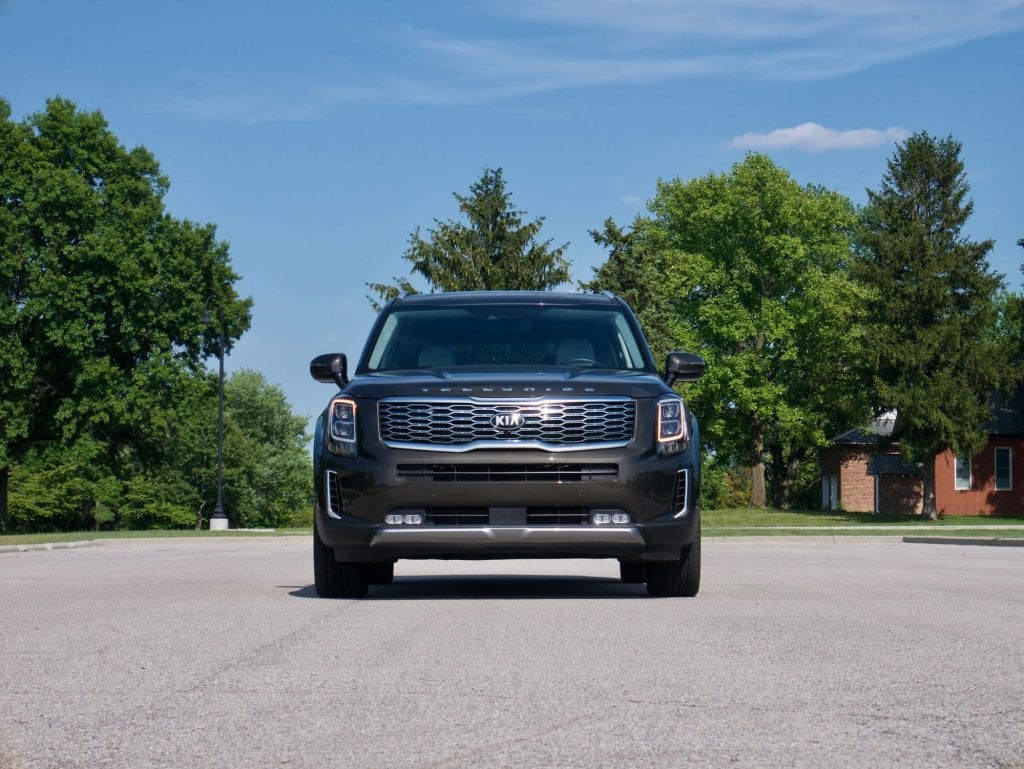 The Telluride comes in with a starting price tag of $31,690. That’s right on par with the competition. The Toyota Highlander costs $31,830 and the Honda Pilot costs $31,850. So, the Telluride does beat these vehicles on price if only by a little bit.

The model that I tested was the SX trim level with AWD. It came with a higher price tag of $46,860. When you look at the competition and climb the trim ladder in the same manner that you would do to get to the price of my tester Telluride, you’ll find that the Honda and Toyota are similar in price.

With all that said, we come back to the question of is this model worth the money. I would have to say yes. While I have gripes about the interior materials and some of the fit and finish, there’s also a bit more space in the Kia.

If I were shopping for a vehicle of this type, space would be a serious concern. Also, the infotainment system is top-notch. This is one of the areas that the Telluride shines. The technology is very good.

With that said, if you didn’t find the cargo space and interior space increases very important, and you don’t feel as strongly about the tech, I can see spending a bit more money for a Honda, Toyota, or other three-row SUV. 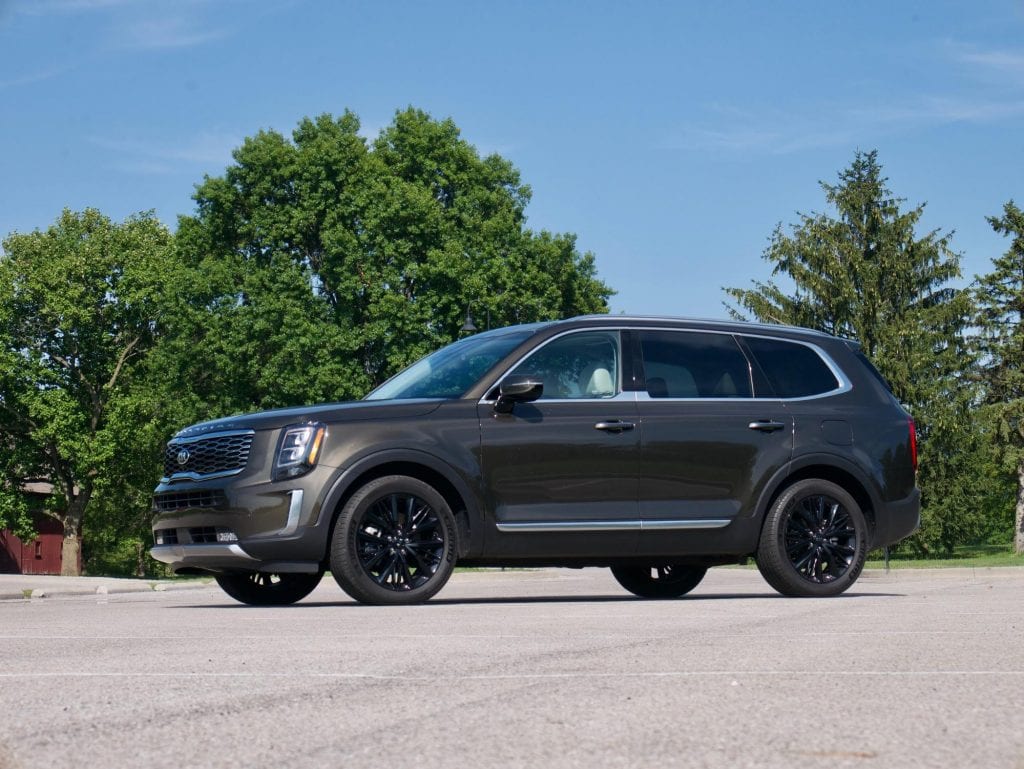 The Kia Telluride is a good entrant into a very tough segment. The Honda Pilot and Toyota Highlander are the vehicles that dominate the segment right now. The Telluride manages to swoop in and hang right behind the leaders. Is it as good as those models? In some respects, yes. In others, not so much. It’s very close to being at the top of the heap, but right now it lags behind.

As good as the Telluride is, I see it struggling to pull sales from Toyota and Honda. However, it will be able to pick up sales from people upsizing from a five-passenger SUV to something bigger as their families grow. This model is an important one, and it’s a good move by Kia. The company just has a bit of work to do on the model before it’ll make Honda and Toyota shake in their boots.

2020 Kia Telluride Review
The Breakdown
The Telluride manages to swoop in and hang right behind the leaders. It’s very close to being at the top of the heap, but right now it lags behind.
Overall
Reader Rating14 Votes
Positives
Plenty of space inside
Comfortable seating
Smooth ride
Plenty of power
Negatives
Styling is polarizing
Fit and finish could be better
Feels big on the road
Some cheap-feeling bits inside
4