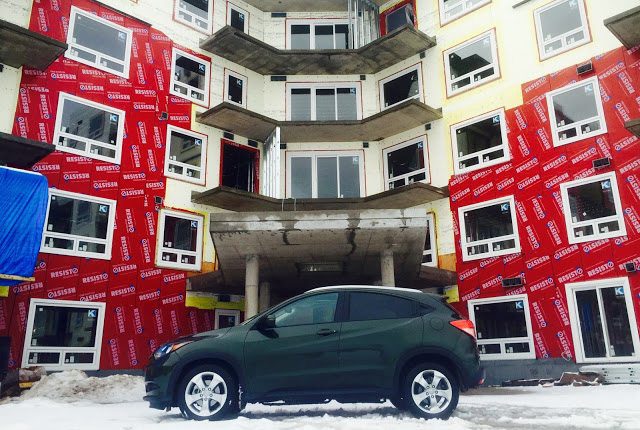 Every month, more than 1200 Canadians are purchasing or leasing a brand new Honda HR-V. Are they mistaking a mistake? Should you follow in their tracks?

In an industry that’s seemingly gone mad for utility vehicles, subcompact crossovers like this HR-V are a large part of the increased demand in the sector. Canadians registered 77,000 more new SUVs and crossovers in 2015 than in 2014, and of those additional 77,000 sales, some 19,000 came from four all-new subcompact utilities: HR-V, CX-3, Renegade, and 500X.

If it seems like subcompact CUVs are all you’re seeing these days, well, “seems like” would be wrong. Canadians are still buying established compact utilities some seven times more often.

But the segment is surging, with subcompact crossover sales jumping 116% in January. Which vehicle topped the category?

WHAT IS IT?
This isn’t the first Honda HR-V. Not sold in North America was an odd duckling from more than a decade ago which Honda also called the HR-V. In some ways, the first HR-V was ahead of its time. In other ways, it looked like something out of the early 90s and would have been ridiculed in North America. 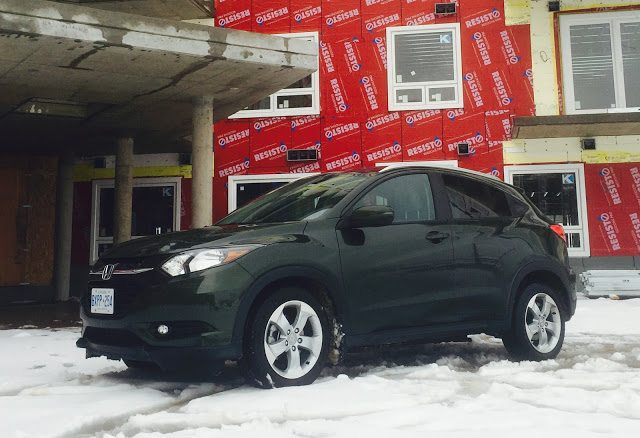 The new HR-V, launched early last summer for model year 2016, is a Honda Fit-based subcompact crossover assembled in Celaya, Guanajuato, Mexico. Although the Fit architecture is obvious once you’re inside or looking underneath, the styling is thoroughly differentiated.

The HR-V also uses a different powerplant. Rather than the Fit’s 130-horsepower 1.5L, this is a 1.8L with 141 horsepower known to thousands of ninth-generation Civic owners.

Likely competitors include the Subaru Crosstrek, Mazda CX-3, Jeep Renegade, Chevrolet Trax, Nissan Juke, Mini Countryman, and Mitsubishi RVR, among others, including a few handfuls of larger utility vehicles such as Honda’s own CR-V.

In Canada, 2016 Honda HR-V pricing begins at $22,485 for a front-wheel-drive LX with a manual transmission. The automatic, a continuously variable transmission, adds $1300.

Our HR-V test specimen is an all-wheel-drive, $31,785, HR-V EX-L Navi, by which Honda means it’s the most costly HR-V, and it includes a navigation system. Key perks compared with the EX include leather seating, lane departure warning, forward collision warning, the aforementioned navigation system, paddle shifters, and roof rails.

HOW BIG IS IT?
Let’s put the HR-V into context by considering two other utility vehicles. First, the Honda CR-V, the best-selling utility vehicle in North America and the HR-V’s big brother. Then, the Jeep Renegade, which has become a top seller in the category in the United States.

The CR-V is 10 inches longer than the HR-V but only marginally wider. In terms of passenger volume, the HR-V makes the most of its subcompact dimensions, offering only 4% less space for occupants than the CR-V. The real losses are felt in the cargo area, where the CR-V is 60% larger.

The Renegade, on the other hand, is significantly wider than the HR-V but, measured bumper to bumper, is nearly three inches narrower. Their passenger volume is virtually identical, but the Renegade’s boxy cargo is 20% smaller.

Hidden behind the dimensions is the fact that space for front passengers in the HR-V is quite limited while the flexibility provided by the HR-V’s Magic Seat amplifies the size of its cargo area.

With each vehicle in their lightest all-wheel-drive form, the CR-V’s engine is tasked with motivating 18.8 pounds per horsepower; the Renegade 19.9. The HR-V, no heavyweight, isn’t an abundantly powerful vehicle, and therefore must propel 21.7 pounds with every pony.

DOES IT WORK?
Like the third-generation Fit on which it’s based, the HR-V’s main claim to fame is space efficiency. The HR-V is small on the outside, big on the inside.

That impression of space doesn’t extend to all points of the cabin, however. While the cargo area is substantial for such a small car and the rear seat is plenty roomy, the driver’s seat doesn’t slide back far enough for me. At a hair under six-feet tall, I’m no Knicks power forward. Nor is the driver’s seat all that comfortable – the side bolstering is too soft to be effective. 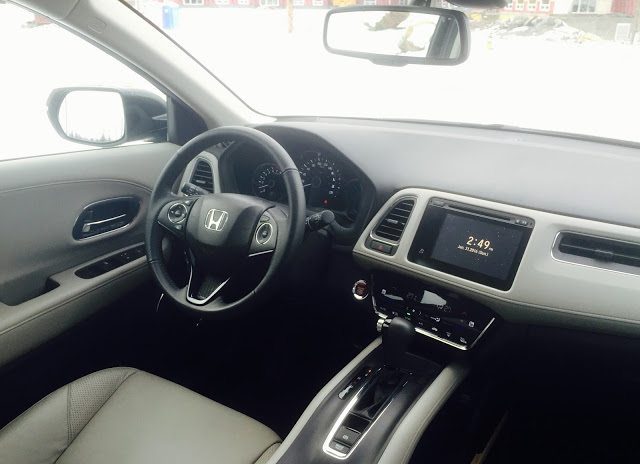 Pair the lack of comfort together with excessive road and engine noise and the HR-V is far from a soothing environment. One can’t cast too much blame at the feet of the 1.8L SOHC 16-valve four-cylinder engine. In the outgoing Civic, it wasn’t nearly this obnoxious. The Michelin Primacy MXV4 tires? They’re standard fit on our Odyssey, as well, and we have no complaints there. In the HR-V, the noisy cabin results from numerous factors, not the least of which is poor NVH work.

Alas, the noisy cabin and uncomfortable driving position colour much of the experience. It’s not difficult to discover that the HR-V is sufficiently powerful, handles with the alacrity you expect of a small Honda, and masks the annoyances of many CVTs. But the roar of the engine causes the HR-V driver to hold back on acceleration. The loud drone of the engine and dreadful tire noise would make me avoid long highway journeys. The ensuing sense of driver fatigue will cause you to long for the serenity of the CR-V, a vehicle which, in our tests, was ever so slightly more fuel efficient in our testing a year ago on winter tires than this HR-V was this winter on all-seasons.

The cabin is stylish, with a phalanx of non-button buttons successfully operating the climate control functions and a multitude of locations to place odds and ends, even under the centre stack. Apple CarPlay overshadows the deficiencies of Honda’s built-in infotainment unit, leaving us to wonder only why there’s such a move away from traditional knobs for volume and tuning.

There’s also no getting away from the space limitations forced upon other subcompact crossover owners, limitations explained away by the Fit-derived Magic Seat. That flexibility alone will be the winning ticket, causing many young couples to ignore the lack of NVH work, the lack of lumbar support in a $32K car, the small size of the sunroof, and the general pokiness of the car.

IS ANYONE BUYING IT?
Consider this. The HR-V didn’t go on sale in Canada until June 2015. Supply was constrained, as Honda attempts to move Fit production out of Mexico while ramping up HR-V production in Mexico.

Yet with little more than six months in which to sell HR-Vs, Honda Canada sold nearly 9000 in 2015. No competitor, even those which had been on sale all year long, sold as often as the HR-V.

Similarly, the HR-V’s U.S. success is noteworthy. The only direct rivals which outsold the HR-V in America in 2015 were on sale all year or prior to the HR-V. 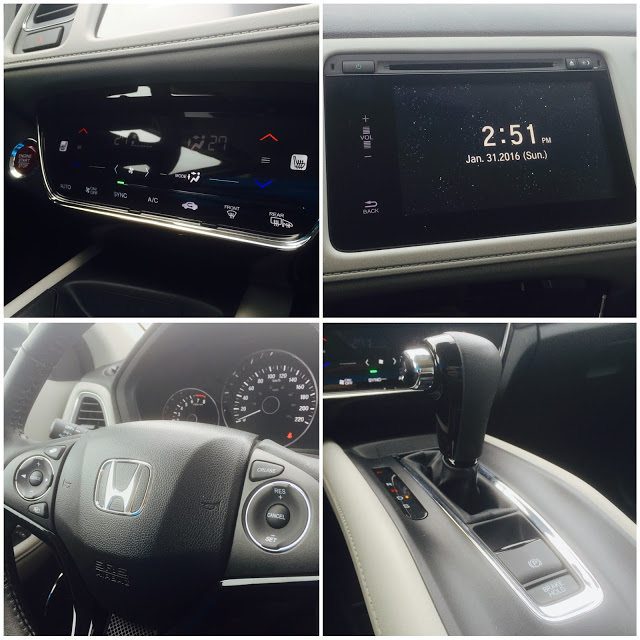 SHOULD I BUY SOMETHING ELSE INSTEAD?
Yes, you should. Not only is the HR-V noisy and uncomfortable, it rides stiffly and offers little handling charm to make up for the sacrifices in ride quality.

Subcompact crossovers are apt to ride stiffly – the Mazda CX-3 is no magic carpet – but you’re owed benefits for the losses incurred by the short wheelbase. The CX-3 possesses excellent steering, a communicative chassis, and far more cohesive design.

The Jeep Renegade is not a great car. But there is an air of off-roadable authenticity lacking in virtually all other competitors in the category. We suggest not stretching past $31,000 to the $39,525 example we tested. We’re big fans of the Nissan Juke’s oddball styling and excellent 1.6L turbocharged engine, though the cabin is tiny.

Or, you could look into the Honda CR-V: far roomier than the HR-V, far more refined, and nicely equipped as an SE for less than $32,000. Or consider other larger utilities like the Hyundai Tucson, Mazda CX-5, Subaru Forester, or Ford Escape. There are also excellent deals available on the aging Volkswagen Tiguan, which is tidily packaged but quick and engaging to drive. Alternatively, if you don’t care about all-wheel-drive, the front-wheel-drive Kia Soul is an excellent bit of automotive design; downright luxurious for less money than this HR-V, too. 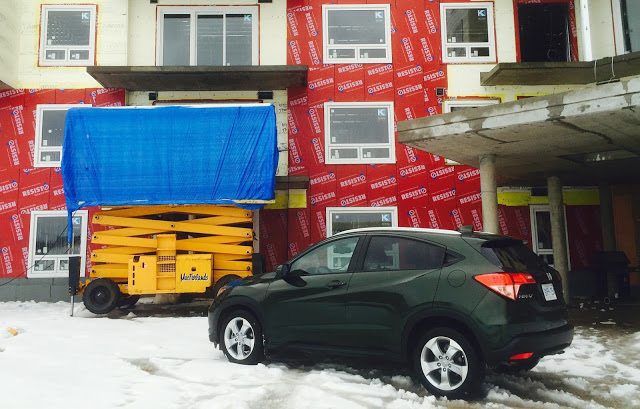 HOW MUCH SHOULD I PAY?
HR-V or bust? The nearly $32,000 HR-V EX-L Navi falls below $29,000 in EX trim, still offers Honda LaneWatch, keyless access, and dual-zone climate control.

Honda Canada also sells a front-wheel-drive EX with a manual transmission for $24,985, which is undoubtedly the most fun-to-drive HR-V by a long shot.

More importantly, though the very idea of overpriced subcompact crossovers continue to befuddle so many auto writers, it is clear that buyers who insist in pursuing this type of vehicle can do better than the HR-V.

Honda will make improvements. Some major alterations will have to wait until the next generation, when the HR-V becomes more powerful, offers more space for the driver, and gains a quieter cabin.

Until then, take seriously the idea of stepping up to the CR-V or one of the CR-V’s outstanding rivals. And to the buyers who are already set on purchasing or leasing an HR-V, compel yourself to take a test drive in Mazda’s excellent CX-3. It’s small, but then, shouldn’t that be obvious?

Timothy Cain is the founder of GoodCarBadCar.net, which obsesses over the free and frequent publication of U.S. and Canadian auto sales figures. Follow on Twitter @goodcarbadcar and on Facebook. The HR-V was supplied by Honda Canada’s press office.